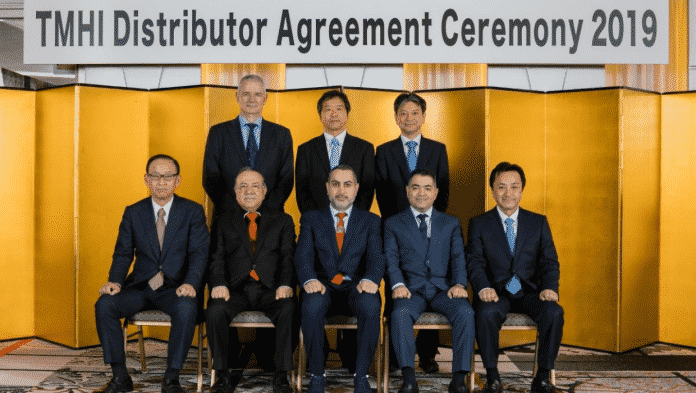 The annual conference brings together distributors from different markets across the world to present and share best practices in sales and marketing from their market or region. Select distributors are also invited to share their particular success stories at the conference where TICO judges highlight and award the top performers for the year.

The company was awarded the prestigious Gold President Award, presented to Executive General Manager of Sales; Mr. Ismail Akbar, for the second consecutive year. It is a highly coveted award given to distributors who achieve above 40% market share. In 2018 the company’s Engineering and Material Handling Division’s market share in Bahrain was 41% earning them the top rank. The second award; the Platinum Club Award was awarded to Ebrahim K. Kanoo Managing Director; Mr. Talal F. Kanoo, and signifies distributors who have maintained more than 20% of the market share for more than 10 years in a row.

Senior Manager of Technical and Sales at Ebrahim K. Kanoo; Mr. Hisham Andraos commented: “These awards once again solidify the company’s commitment to our brands and to the needs of the local market. The Toyota Industries Corporation Distributor Conference is a very important global gathering of top distributors and we are honoured to be included and to have won both prestigious awards at this year’s conference.”

“Ebrahim K. Kanoo has already received several awards for its passenger car sales, marketing and aftersales services in 2018, raising the benchmark for other distributors and being recognised as best in class in the region.” continued Mr. Andraos.

All the Rotary Clubs of Bahrain organised a joint handover event on 29th June 2020 on Zoom. A handover is when the current President...
Read more

Chairman of Enma Mall, Khalid Rafea, has announced the exclusive appointment of Global Real Estate advisor, Savills. As a result, Savills will take over...
Inside Bahrain

All the Rotary Clubs of Bahrain organised a joint handover event on 29th June 2020 on Zoom. A handover is when the current President...
iGA

The right channels of communication between authorities and the public can greatly improve speed and excellence in delivery of services. A new channel of...
Entrepreneurial Journey

The Information & eGovernment Authority (iGA) Chief Executive, Mohammed Ali Al Qaed represented the kingdom of Bahrain at the Ministerial Conference on the Digital...
Wheels and Gears