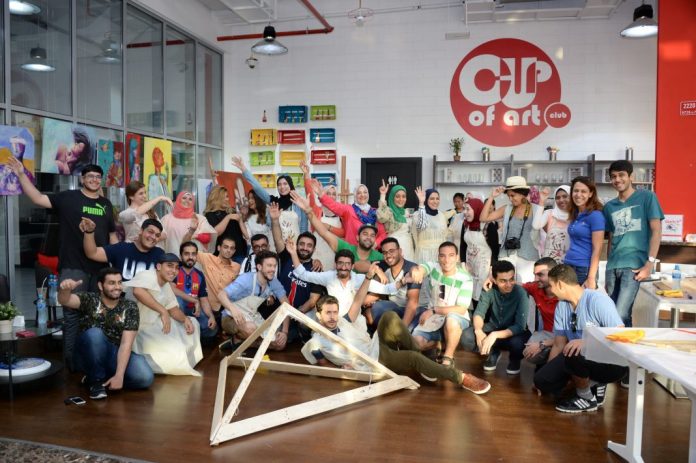 Cup of Art Hosted Egyptian and Bahrain delegations at its headquarters in CH9, Lagoon amwaj.

The two delegations assembled and painted on wooden pyramid as one of the activated planed visit to Bahrain.

The event which was organized by the host at its place in CH9 Amwaj-Lagoon and in corporation with the Ministry of Youth and Sports Affairs, was organized in a youthful atmosphere full of art and creativity.

This activity is one of the implementation of a memorandum of cooperation in the field of youth between kingdom of Bahrain and Arab republic of Egypt.

Where the two delegations introduced to their culture through cooperation on structuring of the joint technical artwork, exchanged talent.

“The idea is retuning to the  roots of Egyptian ancient. The pyramids are the symbol of every Egyptian, and painting on the payrimd reflects the development of art through the ages to this day. The symbol of the origin is the pyramid and the development is the art drowns” said Lamees Aljamea – manager of Cup of Art.

The wood pyramid was designed and build by Ali Najeeb who is talended carpenter on his spare time, manufacture wooden furniture and antiques from recycling wood. The team chose to work with Ali trusting Bahraini talent and for his belief of recycling depleted sources such as trees. With recycle wood we have created beautiful art work such as the pyramid which was  (180*180cm and 100cm high)

The evet was attended by 30 of people from both Bahraini and Egypt delegate member, The head of Bahraini delegation – Mr. Hassan Al Ali, the head of Egyptian delegation Mrs. Amani Mohd Almasri and a number of guests.

Cup of Art Team thanked the ministry of Youth and Sports Affairs for their efforts in strenghting the culture relations between the two countries and the trust in Cup of Art to organized such activities.

Royal Humanitarian Foundation (RHF)'s Secretary-General Dr. Mustafa Al-Sayed, visited some areas affected by the floods and torrents that swept Sudan. This came under the directives...
Spotlight