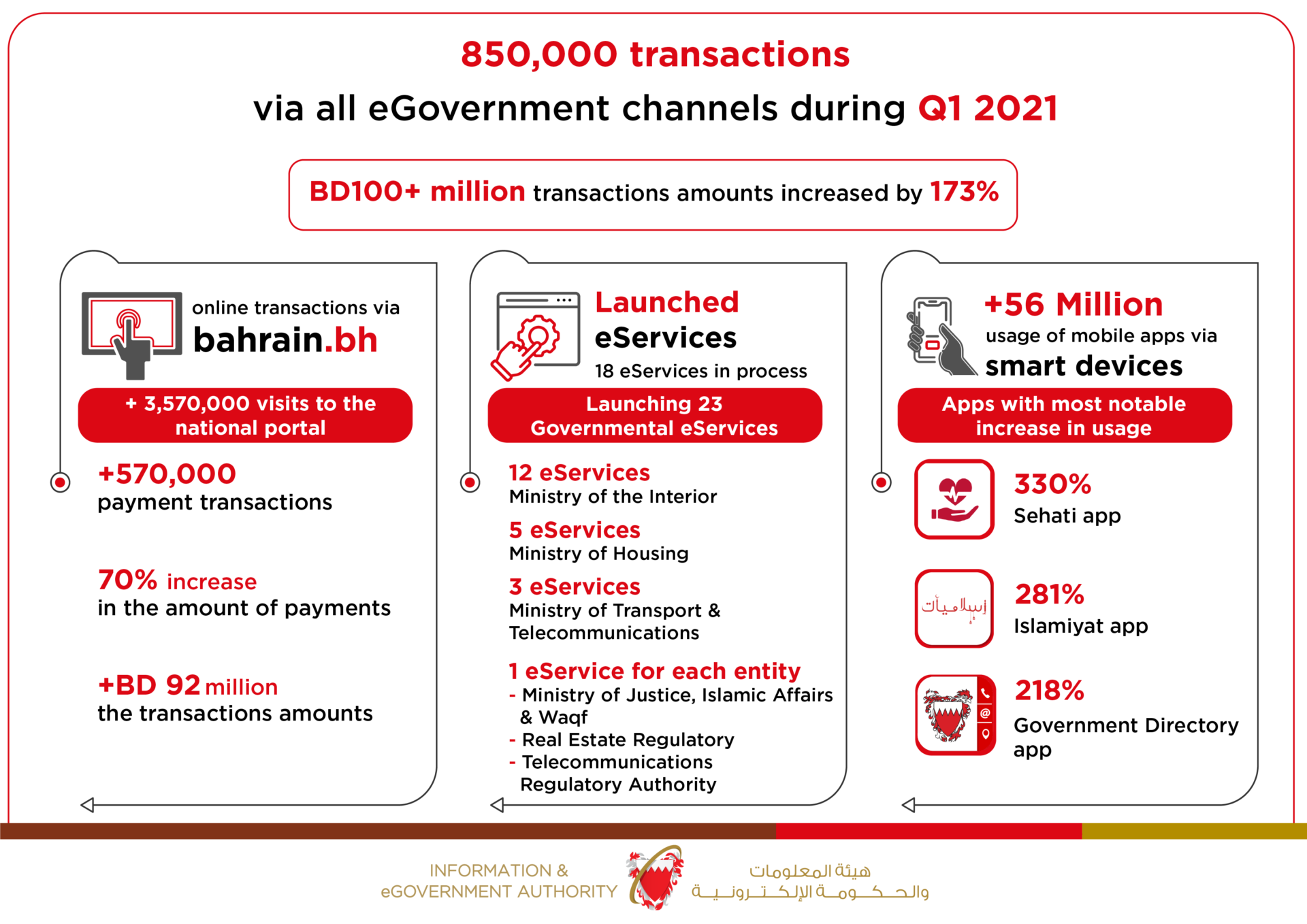 Transactions generated through various eService channels exceeded BD100 million during the first quarter of 2021, soaring 173% compared to the same period last year in 2020, Information & eGovernment Authority (iGA) Deputy CE of Electronic Transformation, Dr. Zakareya Ahmed AlKhajah revealed. The results, announced in a Q1 2021 report, showed a major spike in the performance of digital channels and services, in line with the Government’s digital transformation efforts during the COVID-19 pandemic. The report also revealed an increase in the number of visits to the National Portal bahrain.bh, topping 3,570,000, an 83% rise. There were also more than 850,000 online financial transactions conducted, an 87% surge. Twenty-three eServices were launched during quarter one, with 18 currently in development and 45 expected to be launched soon in partnership with other government entities before year end.

AlKhajah said that the exceptional growth recorded during Q1 was the result of early investment in the Kingdom’s digital infrastructure and the deployment of advanced technologies, as well as partnerships between the public and private sectors. Digital transformation initiatives and the Information and Communication Technology (ICT) sector receive continuous support from the Kingdom’s leadership and government, reaffirming its commitment to accelerating the development of eServices. This has helped maintain Bahrain’s business continuity during the pandemic.

AlKhajah said that the pandemic revealed national commitment and cooperation among Government entities towards achieving Bahrain’s digital transformation goals. In line with this, several eServices  were launched to develop the public sector’s ICT infrastructure. Statistics have shown an exceptional increase in the performance of government channels, mainly due to the automation of most essential sectors, including health, justice, housing, real estate, and others. This led to a record decrease in transaction times.

The report revealed that the National Portal, bahrain.bh recorded over 570,000 financial transactions, an increase of 70% than last year. At the same time, there was a jump in revenues to BD92 million, double the amount received during the same period last year. These results reflect the public’s awareness of government eServices and their value in helping them finalize their transactions easily and quickly via the National Portal without the need to visit service centers. The most popular eServices were ID card, judicial, electricity and water, and visa services.

The report also contained the results for the Government’s smartphone apps, which were used over 56 million times and generated 188,000 online transactions for an increase of 75% compared to Q1 of 2020. The revenue generated exceed BD9,200,000, which is an increase of 95%. This is due to the numerous features introduced to the apps, not to mention their ease of use and the convenience of accessing them at any time and place via smartphones and tablets. The highest number of users recorded was by the BeAware Bahrain app, followed by the ‘Sehati’ app with a increase of 330%, Islamiyat app with 281% due to the inclusion of services such as ‘zakat and charity’ and ‘Fa’el Khair’, and the Government Directory app with 218%. Revenues also increased for other eServices via the National Portal, namely the ones for Credit Report with 493%, the Ministry of Justice, Islamic Affairs & Endowments with 283%, and passport renewal by 182%.