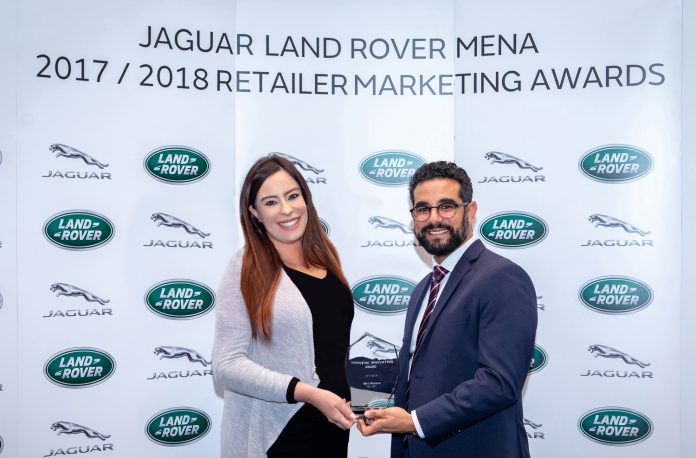 Euro Motors Jaguar Land Rover, Bahrain’s premier dealership, emerged victorious for an exceptional fourth consecutive year, with its accomplishments coming in a number of categories whilst facing tough competition from other Jaguar Land Rover retailers in the region. The incredibly consistent performance by Euro Motor’s Jaguar Land Rover saw them receive the Best PR Award for 2017/18, Best Use of Social Media and the Best APPROVED Pre-owned Programme along with the Marketing Innovation of the Year Award.

Held at the Jumeirah Emirates Towers Hotel on the 4th and 5th July 2018 in Dubai, UAE, the event recognised the successes of the Jaguar Land Rover retailers in the Middle East and North Africa Region, spread over 18 countries, for the Company’s fiscal year 2017/2018.

Upon receiving the awards, Ms. Hannane Laidouni, Marketing Manager at Euro Motors Jaguar Land Rover, expressed her delight at the comprehensive victory and said: “Firstly, I would like to thank our senior management, led by our Managing Director, Mr. Majid Khalid Al Zayani, for their leadership qualities and guiding principles as if it were not for them, we would not be established in the position we are today. This award also goes to underscore their invaluable efforts in our collective growth. I take this opportunity to express my gratitude to Mr. Stephen Lay, the General Manager of Euro Motors Jaguar Land Rover, as well for structuring an environment that breeds high levels of productivity and a need for constant success, and for leading us forward by example, thereby playing an integral role in our accomplishments. The exceptional work put in by the Euro Motors Jaguar Land Rover team day in and day out is also worthy of special mention as the impeccable work ethics and conscientious work rate of each member laid the foundation for our current successes.”

“It is truly overwhelming to have competed with renowned international dealerships and yet be able to walk tall with our heads held high for being commended for our work by one of the highest bodies in the global automotive awards circumference. This recognition from our peers in the MENA region emphasizes the significance of the proactive ventures we have taken over the past year and the outstanding essence of our work at Euro Motors Jaguar Land Rover,” she added.

The Marketing Department has gone from strength to strength during the last few years that saw an extraordinary increase in the quality and quantity of experiential activities, such as the many Drive Events that have been held which bring customers closer to the brand. In order to truly cover the needs of motoring enthusiasts, Euro Motors Jaguar Land Rover recently launched the Jaguar Experience Centre which provides exclusive drives to customers, and runs in tandem with the already successful Land Rover Experience Centre at the Bahrain International Circuit.

The Marketing Department consistently ran successful promotional campaigns for most of their vehicles throughout the year. A number of collaborations also took place with major organizations for various events in Kingdom including the Bahrain Grand Prix 2018, which saw a number of Range Rovers used as VIP shuttles. Euro Motors Jaguar Land Rover also hosted the semi-final leg of Jaguar’s Art of Performance Tour for the second consecutive year.

Zain Bahrain, a leading telecoms operator in the Kingdom, has introduced Be Safe initiative to encourage customers to utilise all Zain digital channels to...
Read more
PR This Week

The National Bank of Bahrain (NBB) has announced that it is has extended its support to its Commercial and SME customers impacted by the...
iGA

The Information & eGovernment Authority (iGA) in collaboration with the National Taskforce for Combating the Coronavirus (COVID-19), has officially launched an app to support...
Entrepreneurial Journey

Our Al Adil group has always focused on delivering pure, clean and safe products to customers. Hence we have implemented state-of-the-art technology for packaging,...
Tech

Fitbit announced the latest evolution of its most popular family of devices, Fitbit Charge 4™ in Bahrain. The Charge 4 and Charge 4 Special...
PR This Week

The National Taskforce for Combating the Coronavirus (COVID-19) held a press conference highlighting updates on national efforts and strategies to prevent the spread of...
PR This Week

While the world is fire-fighting the COVID-19 virus epidemic and not learning from many past disasters to establish a scientific Disaster Recovery Plans, it...
Sports This Week