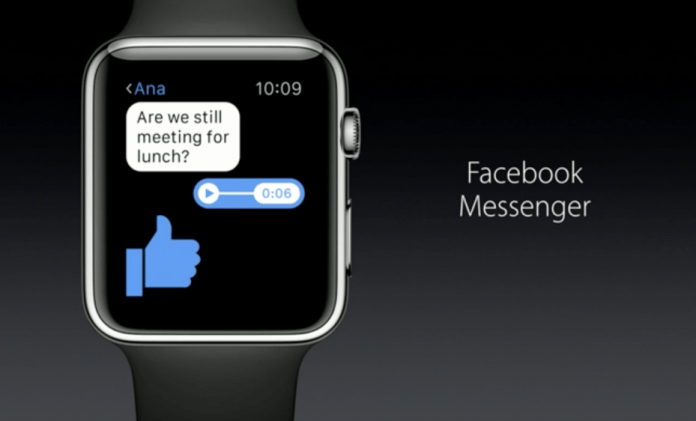 Facebook is bringing its highly-used messenger app to the Apple Watch. This application will allow you to send stickers, have conversations, and share your location with your friends.

Announced at its “Hey Siri” event in San Francisco, Apple senior vice president of operations Jeff Williams revealed the news to coincide with the upcoming release of Watch OS 2. One of the things that you’ll be able to do with Messenger for Apple Watch is the addition of stickers — yes, those loveable images can be added to any conversation just with the tap of the wrist.

This isn’t the first time Facebook has created a customized Messenger app for a wearable device. It’s also available on Android Wear. With more than 600 million monthly active users, Facebook Messenger is one of the top places to have a conversation. Making it available on a more devices clearly gives it more exposure and can make it perhaps a critical conversation tool for millions of people.

Head of AML/CFT at the Central Bank of Bahrain, Ms. Maryam Salman, participated with the Mutual Evaluation Team of the Financial Action Task Force...
Read more
PR This Week

Bahrain Specialist Hospital, whose internationally recognized Center of Excellence for Women Care and a leading IVF Center in Bahrain, is offering couples a limited...
Read more
Wheels and Gears

The Maserati MC20, the brand’s new super sports car, made its debut in Bahrain. After its regional debut in the UAE in January, the...
Read more
Inside Bahrain

The proceeds of e-payments for customs duties and taxes has exceeded BD 40 million in 2020, Customs Affairs Director General of Planning and Administrative...
Read more

Nasser bin Hamad: We Encourage Strong Competition and Expect High Speeds in the "Most Precious Endurance Cup" Under the patronage of HM King Hamad bin...
Inside Bahrain

Labour and Social Development Minister, Jameel bin Mohammed Ali Humaidan, has stressed that the outputs of training should meet the needs of the labour...
PR This Week

A new state-of-the-art Dialysis Center has been set up in Riffa, providing equitable and affordable access to the well-established Bahrain Specialist Hospital Nephrology &...
PR This Week

The first quarter of 2020 brought in the first cases of Covid-19 to Bahrain which led to the closing of non-essential businesses and limitations...
Sports This Week

Under the patronage of HM King Hamad bin Isa Al Khalifa, the King of the Kingdom of Bahrain, the 160-km race of HM the...
PR This Week

Gulf Air, the national carrier of the Kingdom of Bahrain, resumed its direct operations to and from Colombo’s Bandaranaike International Airport with two weekly...
iGA

Share Your Suggestions and enquiries with Sunni Waqf Directorate via Tawasul!

The process of communicating with the Sunni Waqf Directorate just became easier and quicker as you can now communicate directly with its officials through...
Inside Bahrain

The American School of Bahrain (ASB) has introduced a comprehensive Arabic language and Islamic Studies program as a way of imparting and upholding Bahraini...
Inside Bahrain

First Deputy Chairman of the Supreme Council for Youth and Sport and President of the Bahrain Olympic Committee, His Highness Shaikh Khalid bin Hamad...
Inside Bahrain

The proceeds of e-payments for customs duties and taxes has exceeded BD 40 million in 2020, Customs Affairs Director General of Planning and Administrative...
Sports This Week

KHK MMA head coach and BRAVE CF Super Lightweight World Champion Eldar Eldarov was welcomed back upon his return to Bahrain after defending his...
PR This Week

Aspiring Parents get two chances of conception in 1 cycle via...