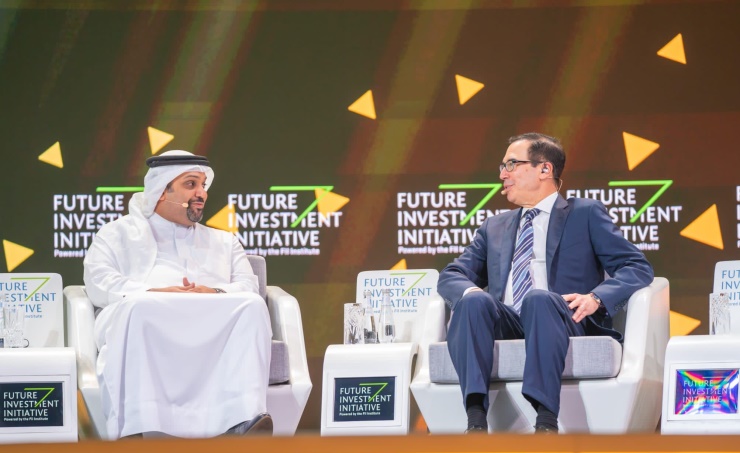 Minister of Finance and National Economy, Shaikh Salman bin Khalifa Al Khalifa, stressed the importance of boosting competitiveness to ensure continuity of economic growth and achieve the desired goals. He pointed out that the Future Investment Initiative reflects the pioneering role of the Kingdom of Saudi Arabia in promoting the development role of the region and its competitiveness. He described the initiative as a platform to exchange experiences and bolster cooperation to attract investments to the region and enhance economic diversity.

The Minister of Finance and National Economy was speaking during his participation, within the high-level delegation headed by HRH Prince Salman bin Hamad Al Khalifa, the Crown Prince and Prime Minister, in the 5th edition of the Future Investment Initiative, being held in the Kingdom of Saudi Arabia under the patronage of Custodian of the Two Holy Mosques King Salman bin Abdulaziz Al Saud. The event is held under the chairmanship of Saudi Crown Prince, Deputy Prime Minister and Minister of Defence, HRH Prince Mohammed bin Salman bin Abdulaziz Al Saud.

In a general discussion session run by former US Secretary of the Treasury and investment banker, Steven Mnuchin, the Minister of Finance and National Economy shed light on many issues including economic recovery in the post-pandemic period, promoting financial stability in the Kingdom of Bahrain, challenges and opportunities in the Gulf economy and the investment opportunities in the next five years.

The minister commended success of the Kingdom of Saudi Arabia in leading quality development initiatives in the region, stressing support of the Kingdom of Bahrain to them. He lauded strong ties binding the two brotherly countries, affirming Bahrain’s keenness on continuous bilateral cooperation in the financial and economic fields. He also pointed out the measures taken by Bahrain during the coronavirus pandemic to protect people’s health, support the national economy and ensure stability of the labour market. “We are now in the third phase which is reaching economic recovery and fostering financial stability,” he said.

The Minister of Finance and National Economy said Bahrain has become an inspirational story of success in dealing with the exceptional health circumstances imposed by the pandemic on the whole world. He attributed this success to the farsighted vision and directives of His Majesty King Hamad bin Isa Al Khalifa and the follow-up of HRH Prince Salman bin Hamad Al Khalifa, the Crown Prince and Prime Minister, and his leadership of the national efforts.

The minister pointed out the need to continue joint action to ensure success of the quality plans and initiatives to back the economy, achieve economic recovery and ensure stability of the labour market.