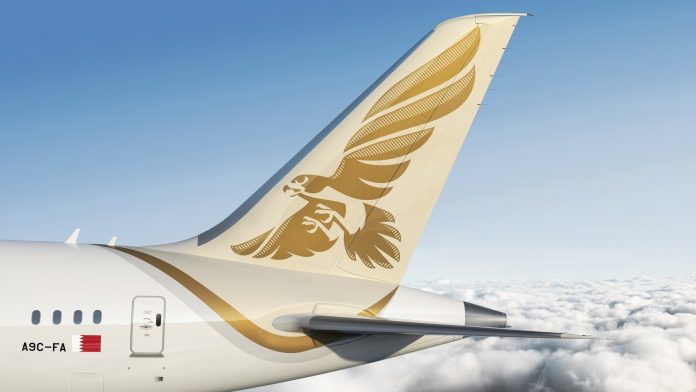 Gulf Air, the National Carrier of the Kingdom of Bahrain, announced its strategic partnership of the Fifth edition of ‘Shop Bahrain’. The partnership comes in line with Gulf Air’s efforts to support the Kingdom’s initiatives that contribute to the boost of the tourism sector.

Shop Bahrain is a 30-day event aimed at celebrating the Kingdom’s hospitality and tourism offering, reinforcing Bahrain’s position as a tourist destination – in particularly visitors coming from neighboring GCC countries – due to its close proximity. The Festival offers a unique shopping experience with fun-filled family entertainment and valuable prizes from the 1st of January until the 2nd of February 2019.

Commenting on this strategic partnership, CEO of Bahrain Tourism and Exhibitions Authority, Sheikh Khalid bin Humood Al Khalifa: “We thank Gulf Air for their on-going support and efforts to promote the fifth edition of ‘Shop Bahrain’ through its different marketing channels. This will increase the Kingdom’s exposure on a regional and global level and encourage travelers to join the festival in the Kingdom. We are honored by this partnership that supports BTEA’s strategy “Bahrain. Ours. Yours.” and strengthens relations between the public and private sectors to achieve the Economic Vision 2030.”

Gulf Air’s Deputy Chief Executive Officer Captain Waleed Al Alawi said: “We are delighted to be amongst the festival’s partners from the very first edition. This partnership comes in line with our efforts to support events and initiatives that revitalize the Kingdom’s economy, such as Formula 1, the Bahrain International Airshow, Ironman and more.”

Through its strategic partnership Gulf Air is offering 5000 discounted airline tickets for Business and Economy Class Return tickets, among the 73,000 instant prizes given to the Festival’s winners. It will also promote Shop Bahrain through its media channels.

It is worth noting that Gulf Air has recently rebranded and introduced its new brand identity and livery in 2018. It also added 6 new destinations in addition to adding 5 new Boeing 787-9 Dreamliners and an Airbus A320neo to its fleet.

Shop Bahrain’ reinforces the Kingdom’s position as an accessible and welcoming destination to families due to its proximity to GCC countries through King Fahad Causeway or the Bahrain International Airport. The Festival offers varied experience through participating malls and hotels which will allow visitors to enter the Loyalty System and win valuable prizes.

Shoppers and visitors can learn more about “Shop Bahrain” through the Festival’s website: www.shopbahrain.com or through the account @shopbahrain on the social networking channels Facebook, Twitter, Instagram, SnapChat, YouTube and Whatsapp. Most recent updates and news about the Festival are also available on the Shop Bahrain Application released for iOS and Android.

Batelco, the leading digital solutions provider in Bahrain has announced the establishment of “Global Zone Kuwait”, which will offer an ecosystem platform to further...
Read more
Spotlight

Medpoint Design and Events Management is hosting the first of its kind Global Women’s Virtual Fashion Forum & Show which will highlight topics that...
Tech

INJAZ Bahrain has successfully concluded this year’s version of its annual Young Entrepreneurs competition, which was held online for the first time ever on...
© GO ALIVE MEDIA
MORE STORIES