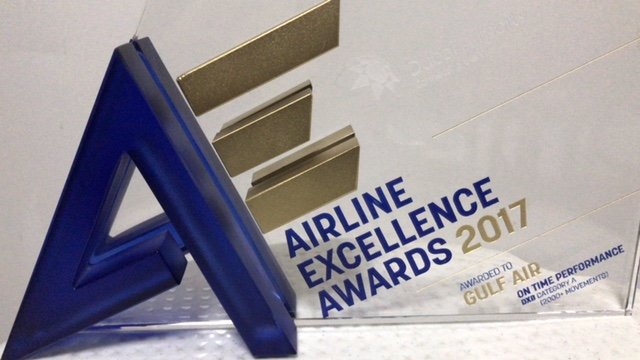 Gulf Air, the Kingdom of Bahrain’s national carrier, has been recognised for its On Time Performance (OTP) across the United Arab Emirates. The airline was awarded by Dubai airports for its 2017 OTP category A (2000 +movement) at the second annual Airline Excellence Awards held at Park Hyatt – Dubai this year. Alongside this, Gulf Air was also recognised by Abu Dhabi International Airport for its OTP throughout the month of May 2018, during which the airline achieved 94% OTP and exceeded the target set. All Abu Dhabi International Airport departure flights have to attain 80% OTP.

Gulf Air Deputy Chief Executive Officer Captain Waleed Abdulhameed AlAlawi said: “Gulf Air has been proudly flying to Dubai since 1960 and operating to Abu Dhabi since 1954. We are committed to continually supporting our longstanding relationship with the United Arab Emirates. Achieving such record punctuality in Gulf Air’s operational performance across both Dubai International Airport and Abu Dhabi International Airport is a result of our workforce’s great efforts and commitment. Working together we strive to deliver on our promise to get passengers to their destinations in a timely manner, thereby giving them the best possible experience. I am proud of what Gulf Air has achieved in the United Arab Emirates and look forward to more such positive results in future, across our expanding network.”

Gulf Air’s Dubai Airport Manager Mr. Ahmed Hafiz and the airline’s Abu Dhabi Airport Manager Mr. Tariq AlAlawi jointly commented: “We recognise the need for travellers to have an airline that is reliable, efficient and consistent. Having a strong OTP record is critical for any airline and at Gulf Air we are committed to delivering on our on time performance and setting our targets even higher than those expected by local airport authorities.”

Gulf Air has held the top spot in recent years for OTP. The airline was independently ranked by UK aviation analysts OAG the third most punctual airline in 2017, amongst Middle East and African airlines, with an average OTP of 80.22%. additionally, Gulf Air ranked as the most punctual airline in 2016, amongst GCC airlines and also ranked first among major airlines from the Middle East and Africa for the 5th Annual Airline On-time Performance Service Awards in 2013.

Bahrain’s national carrier currently serves 47 cities in 26 countries, spanning three continents. Gulf Air is committed to being an industry leader, continually enhancing its services and tailoring a product offering that best fits its passengers’ needs. The airline is famous for its traditional Arabian hospitality, evidenced by its signature family and business friendly products. Today, Gulf Air operates double daily flights or more to select destinations across the GCC, MENA region, Indian Subcontinent and Europe while its network spans the GCC, MENA region, Indian Subcontinent, Europe and the Far East. The airline provides seamless connectivity for passengers travelling across its network via its efficient Bahrain International Airport hub. Further information about the airline’s network, fares and flight schedule can be found online via the official Gulf Air website gulfair.com, by contacting its 24-hour Worldwide Contact Centre on (+973) 17373737 in Bahrain, or any Gulf Air sales offices and approved travel agencies.