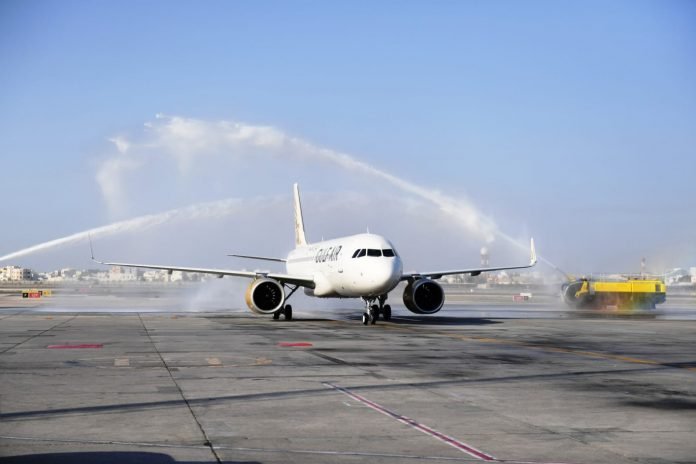 Gulf Air, the national carrier of the Kingdom of Bahrain, today welcomed the airline’s first Airbus A320neo, which landed in Bahrain International Airport at approximately 1600 local time. Following its delivery from the Airbus factory in Toulouse, France the aircraft will service a number of regional routes within the Gulf Air network. With Gulf Air Chief Executive Officer Mr. Krešimir Kučko and representatives from Airbus on board, the A320neo received a water canon salute as it taxied to the terminal and was welcomed at Bahrain International Airport by a delegation of VIPs, dignitaries, government and aviation industry representatives and media members. The aircraft is first of the 12 A320neo aircraft ordered during the 2016 Bahrain International Airshow. This delivery also makes Gulf Air the first national carrier to fly the A320neo in the Middle East and Africa region.

Gulf Air Chief Executive Officer commented: “We are delighted to welcome the airline’s newest aircraft and proud to be the first national carrier in the region to operate the A320neo. The history is repeating itself, as we were the first in the region to receive the A320 aircraft in 1992. We have a strong network in the region with multiple daily flights to 10 regional cities and the addition of A320neo into our fleet will strengthen our position in our market. The relationship we have with Airbus is very strong and we continue to work closely with them to further develop our fleet and products to maintain customer satisfaction”.

The airline’s Deputy Chief Executive Officer said: “As we welcome this new aircraft to our base in the Kingdom of Bahrain, we invite our loyal customers to come onboard and enjoy the experience of flying the A320neo. A peak travel period is upon us and I feel glad to receive this aircraft right before Eid break as people travel for holiday. This is a great milestone for Gulf Air”.

Gulf Air’s A320neo (new engine option) is the most advanced A320 version as Airbus continues to invest over 300 million Euros a year in innovation and upgrades for the A320 family to maintain its position as the most advanced and fuel-efficient single-aisle aircraft family. Featuring the widest single aisle cabin in the market, the new aircraft is equipped with LEAP-1A engines from CFM International and feature large wingtip devices known as Sharklets. Together they deliver 15% fuel burn reduction per seat. The A320neo is also more eco-friendly with 5,000 tonnes less CO2 emissions per year per aircraft and nearly 50 percent reduction in noise footprint compared to previous generation aircraft.

In 2018, Gulf Air’s network will serve 49 cities in 26 countries. Gulf Air is committed to being an industry leader, continually enhancing its services and tailoring a product offering that best fits its passengers’ needs. The airline is famous for its traditional Arabian hospitality, evidenced by its signature family and business friendly products. Today, Gulf Air operates double daily flights or more to select destinations across the GCC, MENA region, Indian Subcontinent and Europe while its network spans the GCC, MENA region, Indian Subcontinent, Europe and the Far East. The airline provides seamless connectivity for passengers travelling across its network via its efficient Bahrain International Airport hub. Further information about the airline’s network, fares and flight schedule can be found online via the official Gulf Air website gulfair.com, by contacting its 24-hour Worldwide Contact Centre on (+973) 17373737 in Bahrain, or any Gulf Air sales offices and approved travel agencies.

Ford confirmed that it intends to restart initial production and manufacturing at most of its main continental European vehicle and engine plants from May...
Read more
Wheels and Gears

The Mazda3 won the 2020 World Car Design of the Year award, one of the special awards of the World Car Awards (WCA). The...
Read more
Wheels and Gears

Motorcity, the exclusive distributor for SsangYong cars in Bahrain, has announced the arrival of the 2020 Tivoli. A compact SUV combining luxury, style and...
Read more

AlMabarrah AlKhalifia Foundation has announced the success of its "100 Laptops" initiative after it contributed to providing 162 laptops for students, exceeding its initial...
Entrepreneurial Journey