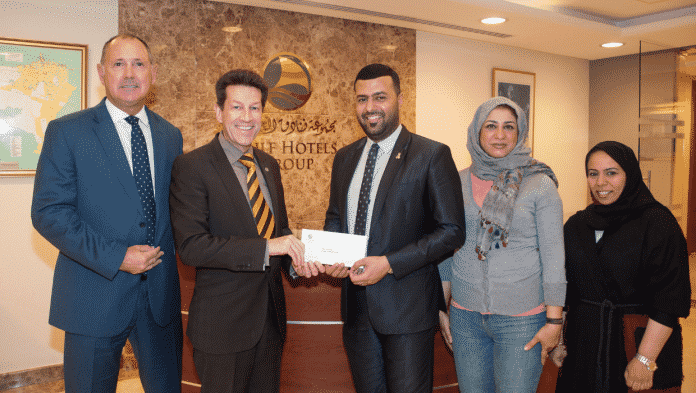 The Gulf Hotels Group was the first donor to the National Bank of Bahrain campaign that has been launched in collaboration with the Smile Initiative to support children with cancer.

Mr. Jones expressed Gulf Hotels Group’s pride as the first respond to this Ramadan charity campaign, stressing the Group’s keenness to continue its responsibility towards the Bahraini community and support the most vulnerable segments, including the cancer patients.

Mr. Al Zayani expressed his thanks to the Gulf Hotels Group, which has been the first supporter of the Smile Initiative, as part of Group’s commitment to social responsibility towards the Kingdom of Bahrain aimed at serving the most vulnerable of Bahraini society. He pointed out that the donation will be allocated to build an integrated cancer centre to support children with cancer and their parents in the Kingdom of Bahrain.

“We are rapidly starting to see a great deal of interaction with the initiative. We are committed to achieving the objectives of the charity campaign in cooperation with our partners at the National Bank of Bahrain and the Ministry of Health.” Al Zayani stated.

“This campaign represents a qualitative shift in voluntary charitable work in the Kingdom of Bahrain. We are confident that this donation will be an incentive for us to increase joint coordination and create new ideas and provide a modern model of transparent professional voluntary work reflecting a high level of brotherhood and solidarity between individuals and institutions in the Kingdom of Bahrain “. Alzayani added.

The Smile Initiative provides the required psychological medical needs of all Bahraini and resident children with cancer. Its activities focus on purchasing medical equipment for patients’ home use, providing home education for the children, and offering support groups for parents among others.

NBB’s campaign will run until the end of the year and involves providing the Society with access to new sources of funds and to raise awareness of Childhood cancer. Members of community are being urged to donate directly to the initiative’s bank account (BH12 NBOB 0000 0099 660067).

In line with ongoing efforts to prevent the spread of the Coronavirus (COVID-19), the Ministry of Health today announced it has started conducting field...
Sports This Week

BRAVE Combat Federation, the biggest sports property in the history of Bahrain, has launched an awareness campaign to combat the spread of Coronavirus worldwide,...
Inside Bahrain

If you’re looking to renew your ID card or need other services related to it, remember that there’s no need to invest time and...
Entrepreneurial Journey

Many years ago I unfortunately had the habit of smoking. Actually I was not a chain smoker, but would enjoy five or six cigarettes...
Tech

With the current situation at hand & in line with its commitment to protect its employees and the public, the Information & eGovernment Authority...
PR This Week

Education Minister, Dr. Majid bin Ali Al-Nuaimi, has affirmed that the Ministry of Education has succeeded in ensuring the continuity of its educational services...
Sports This Week

Huawei offers users an extended warranty on a range of products. This as a precautionary measure based on recent public health and prevention considerations....
Inside Bahrain