Hamza Kooheji inspires the next generation 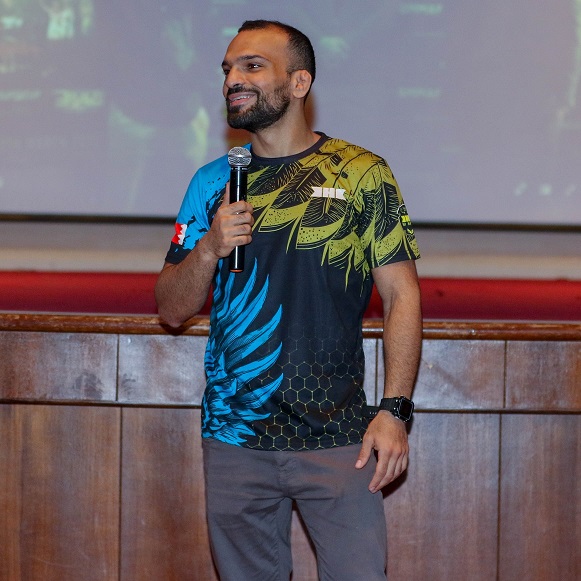 Hamza “The Pride of Bahrain” Kooheji will be the nation’s representative in a combat sports world title fight, as he takes on Brad Katona from SBG Ireland, in a Bantamweight title fight scheduled to take place in the Kingdom of Bahrain, on March 11th, at the Khalifa Sports City Arena.

It will be the first time a Bahraini earns such an achievement in any combat sport, as Hamza is being hailed as the Manny Pacquiao and Muhammad Ali of Bahrain, taking the flag of the Kingdom to the highest places in sports.

Ahead of this historic moment for professional sports in Bahrain, Kooheji paid a visit to his old school, the Abdulrahman Kanoo International School, where he surprised students with a small training session, as well as a talk about how he made it in the professional ranks, and the impact that martial arts had in his life. Alongside him, were BRAVE CF Super Lightweight World Champion and KHK MMA Bahrain Head Coach Eldar Eldarov and KHK MMA Team Bahrain Silver IMMAF World Medalist Mohammed Al Sameea who assisted in the training session.

Finally, he had another huge surprise for the school kids. As a token of appreciation and to give back to his community, Hamza purchased tickets to his fight at BRAVE CF 57 and distributed them to delighted young students, who will be in attendance to a monumental moment for sports in the Kingdom of Bahrain, cheering one of their own as Kooheji looks to become the first Bahraini-born professional world champion in any combat sport.

The biggest name in combat sports in Bahrain, Hamza will headline the latest edition of BRAVE Combat Federation, as part of the BRAVE International Combat Week. The largest sports festival in Asia also features the first-ever edition of the MMA Super Cup, with Team Bahrain looking to maintain the number one ranking, achieved at last month’s IMMAF World Championships.