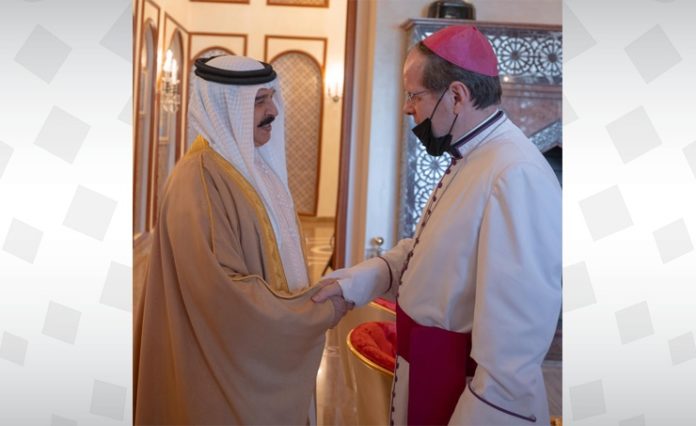 His Majesty King Hamad bin Isa Al Khalifa received today, at Al Safriya Palace,  Archbishop Michael Lewis, The Anglican Bishop of the Diocese of Cyprus and the Gulf in the Episcopal Church in Jerusalem and the Middle East, currently on visit to the Kingdom of Bahrain.

HM the King welcomed Archbishop Michael Lewis, commending his efforts to promote the values of goodness, amity and tolerance.

HM the King stressed Bahrain’s pride in its ancient history of fraternity, human coexistence and tolerance among all religions and sects, descrbing the Kingdom as one loving and interconnected family thanks to the awareness of its people and its adherence to noble humanitarian principles and its respect for people of other religions.

HM the King reiterated Bahrain’s keenness on living in peace and amity peace and love and mutual respect with all people, noting that the Kingdom has always welcomed everyone on its land for centuries.

He highlighted Bahrain’s efforts and pioneering global initiatives that contribute to consolidating and strengthening the culture of rapprochement, coexistence and interfaith dialogue for the benefit of the peoples of all mankind.

He noted the the noble humanitarian role played by the King Hamad Global Center for Peaceful Coexistence and its continuous efforts and multiple achievements in this regard.

HM the King reviewed with Archbishop Michael Lewis key issues which contribute to promoting the culture of dialogue, interfaith tolerance, commitment to moderation and renunciation of extremism.

Archbishop Michael Lewis expressed his thanks and gratitude to His Majesty the King for the recent opening of the new Catholic cathedral in the Kingdom of Bahrain.

He said that the milestone reflects His Majesty’s care and support for coexistence between different religions and sects, ensuring religious freedoms for all sects in the Kingdom of Bahrain and spreading the values of human brotherhood, coexistence and tolerance among peoples.