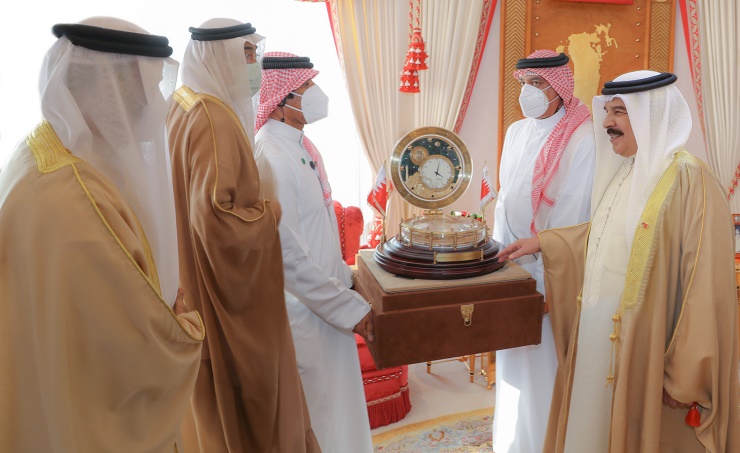 Al-Sidiqi presented HM the King with the official document of “Al-Zubarah and Bahrain” calendar, which is one of the collectibles of the library of late Shaikh Yousef Al-Sidiqi. The document, issued 140 years ago, is considered of high historical value.

HM the King expressed thanks and appreciation, recalling the good qualities of late Shaikh Yousef Al-Sidiqi and his keenness to preserve important historical documents. He also stressed his role in religious sciences and guidance, praising Abdul Nasser Al-Sidiqi’s interest in such documents and manuscripts that highlight a bright side of the nation’s scientific and cultural history and renaissance.

HM the King underscored the distinguished status of the Kingdom of Bahrain thanks to its glorious civilization and heritage, wishing Abdul Nasser Al-Sidiqi every success in serving his nation.

In tribute to late Yousef Al-Sidiqi’s role in serving his nation and Islam, HM the King ordered to name one of the roads in Zallaq after him.

Dr. Shaikh Khalid expressed thanks and respect to HM the King for the meeting, commending his pioneering role in preserving Bahrain’s history. He pointed
out the establishment of the Historical Documents Centre forty years ago and HM’s support to historians.