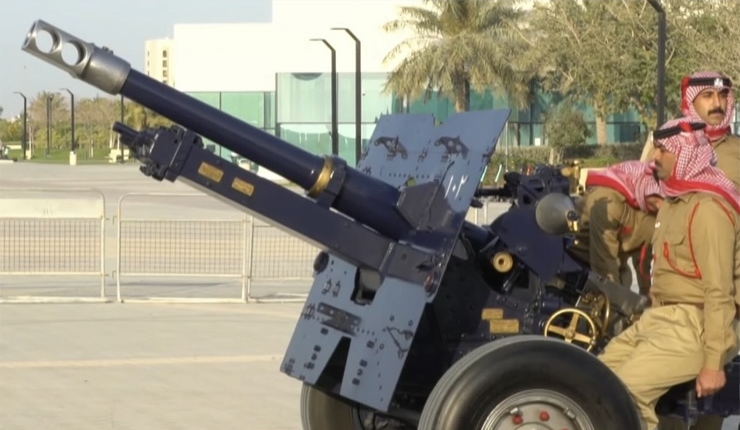 Iftar Cannon “Madfa Al iftar” is used day to notify people that it is time for Iftar. This tradition originated way before the invention of clocks and technology.

Although the cannon is still used in different Arab cultures, it no longer serves its purpose as it once used to, but it is a potent symbolic tradition.

The tradition has spread throughout the Arab region in the past century. The fire cannon tradition was adopted in Saudi Arabia, specifically in Makkah and Medina during the 1920s, and ultimately made its way to Bahrain as a glorified Ramadan symbol.

Bahrain has embraced this tradition for many years as a welcoming ceremony for the holy month. Citizens can witness the Ramadan cannon ceremony live at different spots around the Kingdom such as The Avenues and Arad Fort. People can also watch the cannon fire broadcast live on national television.

“We are happy to witness this tradition with our children and teach them the story behind the Iftar Cannon and what it symbolizes to us as Muslims and a community. This annual ceremony welcomes us to embrace this tradition with safety and prosperity,” Ahmed, a visitor to the annual fire cannon display said.

Several families bring their children to the cannon sites to watch live the much-beloved tradition.

Several narratives have tried to explain the reasons for the cannon boom to announce the end of the fast.

According to some researchers, at sunset on the first day of Ramadan in 865, Mamluk Sultan Khosh Qadam wanted to test a new cannon he had received. The first time it was fired coincided with the Maghrib prayer, leading locals to believe that the sound signaled the breaking of the fast. They welcomed the new practice, and the cannon was then fired each day of the blessed month.

This coincidental practice became a reliable sign for Muslims to break their fast as it spread to all Arab countries and became a significant part of Ramadan.

Muslims have since then relied on the cannon shot as to break their fast as the sun sets.

The cannon is first fired to welcome the holy month and then each day to announce the breaking of the fast and maghrib prayers.  The cannon was always fired from a high point to ensure the sound resonates clearly.

The significant symbolism of the Iftar Cannon reminds us of a simpler time when people relied on a loud echo to break their fast after a long day. Yet, as technology made it easier to tell time, Bahrainis still embrace their traditions and heritages proudly as a way of welcoming the holy month with an open heart.