Under the patronage of His Royal Highness...

Loading one’s car is an art. A...
SocietyPR This WeekiGA in cooperation with the General Directorate of Traffic and Bahrain Insurance Association Provide an online reporting mechanism service for ‘Mutually Resolved Minor Accidents’ available via eTraffic App 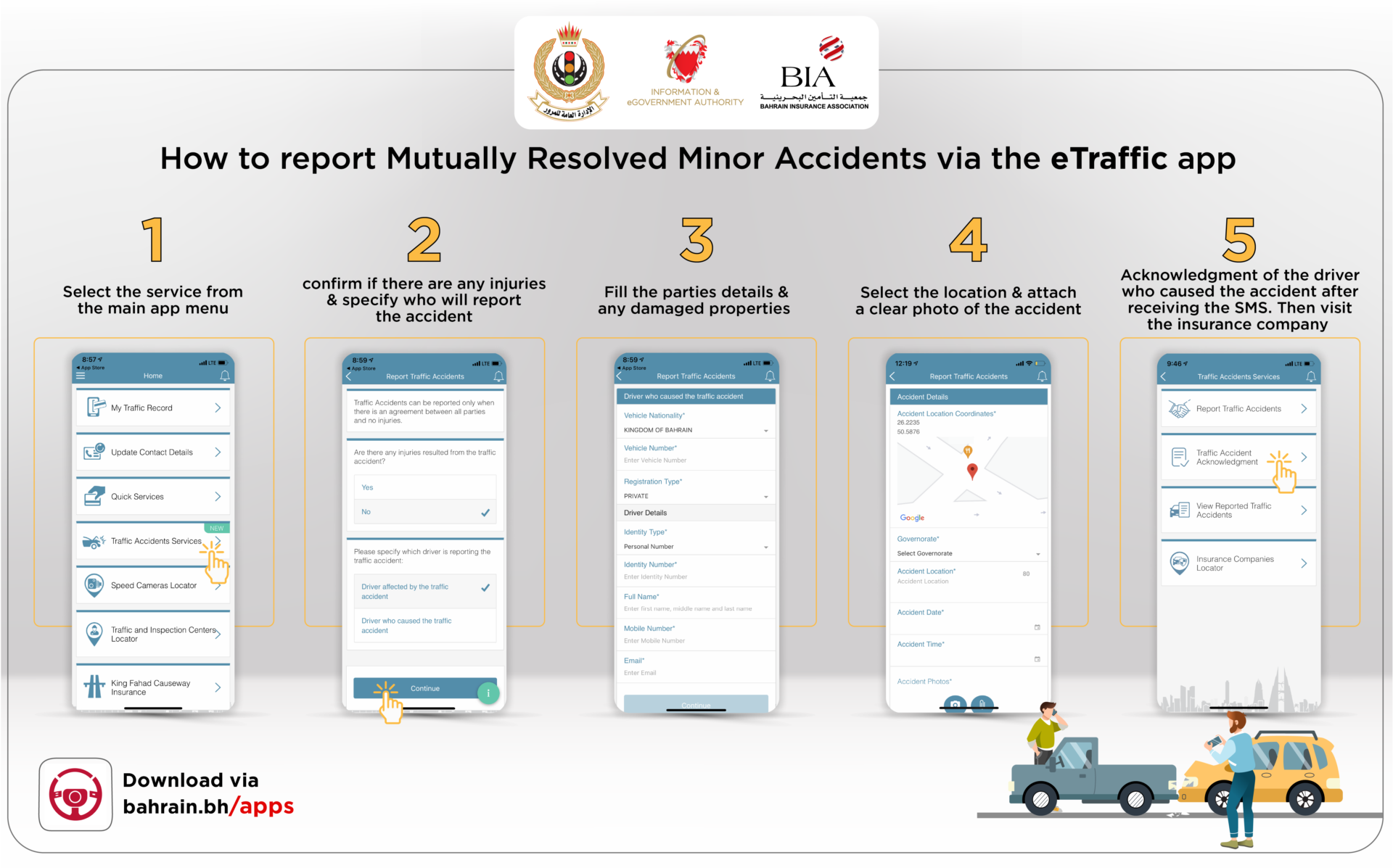 New services have been launched via the eTraffic app to simplify the reporting of minor traffic accidents, the Information & eGovernment Authority (iGA) announced. The services, covering accidents between two or more parties, allow for traffic procedures to be directly handled by insurance companies. Provided in cooperation with the General Directorate of Traffic (GDT) and Bahrain Insurance Association, the services are in line with a decision by the Minister of Interior, Gen. Rashid bin Abdulla Al Khalifa to assign ‘mutually resolved minor accidents’ to insurance companies, and to enhance cooperation between the iGA and public and private entities.

iGA Acting Chief Executive and Deputy CE of Electronic Transformation, Dr. Zakareya Ahmed AlKhajah said that providing online channels for reporting traffic accidents is in line with the vision of Bahrain’s senior leadership and directives by the Minister of Interior, Gen. Rashid bin Abdulla Al Khalifa to implement digital transformation across all services offered by the ministry and its directorates, and to save the public time and effort. It is also a highlight of the ongoing partnership between the iGA, the GDT, and the Bahrain Insurance Association, which recently conducted detailed studies of the laws and regulations, a restructuring of procedures, and the development of various electronic systems.

He stated  that the new method digitally links insurance companies with the   General Directorate of Traffic (GDT) and the Informaiton & eGovernment Authority (iGA), and the eTraffic app which now offers four new services: a ‘Report Traffic Accidents’ function which allows citizens, residents, and visitors from the GCC to alert insurance companies about minor accidents; ‘View Reported Traffic Accidents’ which provides details of all reported accidents; ‘Traffic Accident Acknowledgment’ which allows the driver who caused the accident to admit fault; and ‘Insurance Companies Locator’ which contains information on insurance companies, their locations, and contact details.

Al Khajah stated that the Kingdom is a pioneer in providing innovative traffic eServices, highlighting their benefits which include reporting accidents in a few time-efficient and effort-saving steps, enhancing the flow of traffic, and ensuring road safety. There will also be no need for the public to have traffic reports issued nor to have to pay for them if there is mutual agreement between the two parties, leaving insurance companies free to launch their own procedures. He added that the new services, in line with Bahrain’s ongoing digital transformation efforts, will help accelerate development.

To use the new services, parties to a simple traffic accident must report it via the eTraffic mobile app or by filling the insurance electronic form. Certain requirements must be met. All parties must mutually agree to report the accident via the eTraffic app or Insurance electronic form. There should be no injuries, and if the affected driver reports the accident, then the other driver must admit fault by using the app’s ‘Traffic Accident Acknowledgment’ service or via the National Portal, bahrain.bh. If the driver at fault is the one reporting the accident, then this will be accepted as an admission of fault. All parties must then head to the insurance company responsible for the vehicle of the driver at fault within 48 hours.

AlKhajah stated that traffic accident services will be available to users round-the-clock and throughout the week. He urged users who still can’t view the new services on the eTraffic app to update to the latest version on their smartphones or download it from the eGovernment App Store bahrain.bh/apps.

He affirmed the Information & eGovernment Authority commitment to cooperation with all public and private entities to further develop systems and services that improve the public’s quality of life through digital transformation,and make them readily available through online channels.

As per the most recent statistics provided by the iGA, the total number of eTraffic app users has exceeded one million. Its services were used more than two million times, and it has over 120,000 active users per month.   The eTraffic app includes a host of other eServices such as ‘My Traffic Record’, ‘Update Contact Details’, and ‘Quick Services’ which include payment of traffic contraventions, vehicle registration and driving license renewals, and discounts on vehicle registration renewal fees. Other services include ‘Speed Cameras Locator’, ‘Traffic and Inspection Centers Locator’, ‘King Fahad Causeway Insurance’, ‘Fuel Services’ which include a fuel stations locator service, and ‘Related Services’ which includes driving school services, issuance of international driving licenses and traffic certificates, and more.