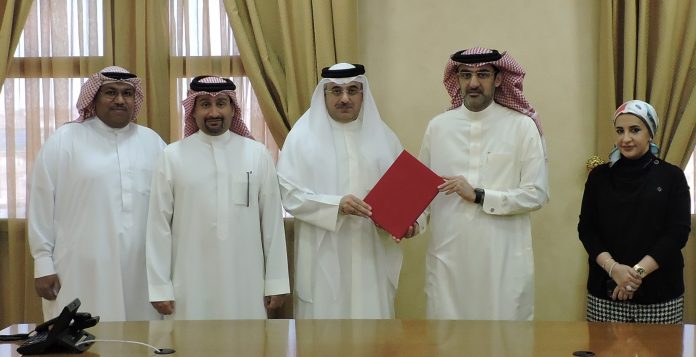 The Information & eGovernment Authority (iGA) signed an MOU with the National Space Science Agency (NSSA) in an aim to collaborate in space science and its diverse implementations; build informatics infrastructure that supports space researches in the Kingdom; enhance the joint efforts that aim at benefiting from scientific experiences and human qualification aspects; along with utilization of modern technologies to serve this field. Additionally, conduct training courses to qualify national cadre all in line with Government Action Plan objectives and inspirations of Vision 2030.

AlQaed stressed the importance of collaborations with specialized organizations to contribute in strengthening Bahrain’s position in such vital sector. He further explained that this partnership will increase society awareness in NSSA’s active role and attract the attention of the ambitious Bahraini youth to enter this promising career.

AlQaed also highlighted the role of the iGA, represented by the GIS, to benefit from remote sensory technologies via satellite. Moreover, he praised the efficiency of Authority’s human resource, expertise in this field and great potentials it possesses.

“This fruitful partnership with the Information & eGovernment Authority will without-a-doubt contribute in placing a significant stamp for Bahrain in the space science field. It will also attract foreign investments in this sector,” stated Dr. AlAseeri while highlighting that such initiative comes in line with NSSA’s efforts to enhance communication and cooperation with various sectors in the Kingdom as the partnership is an essential part in Authority’s strategy 2019-2023 – supported by the Cabinet.

Furthermore, AlAseeri confirmed Authority’s keenness to achieve integration in efforts and potentials amongst various public entities to provide the best services, and according to the best standards. He also pointed at the importance of space science in supporting countries’ infrastructure and the delivery of vital information to decision-makers. He continued that space science and its applications are classified by specialized international institutions amongst future science which will be more in demand and relied on – this was reflected by His Majesty’s vision which resulted in issuing a decree of establishing NSSA; followed by the increased interest in Bahrain in the field of space science.

Offered by iGA to NSSA, remote sensory technology extracts data and information from space and air images that are taken by satellites to enable the study of earth surface and nature.

Bahraini parliamentarians have highlighted the Kingdom’s experiences in managing the COVID-19 pandemic and the measures taken to protect society from the repercussions of the...
Read more
PR This Week

Y.K. Almoayyed & Sons, the sole distributor of Nissan vehicles in the Kingdom of Bahrain is proud to have hosted a special delivery ceremony...
iGA