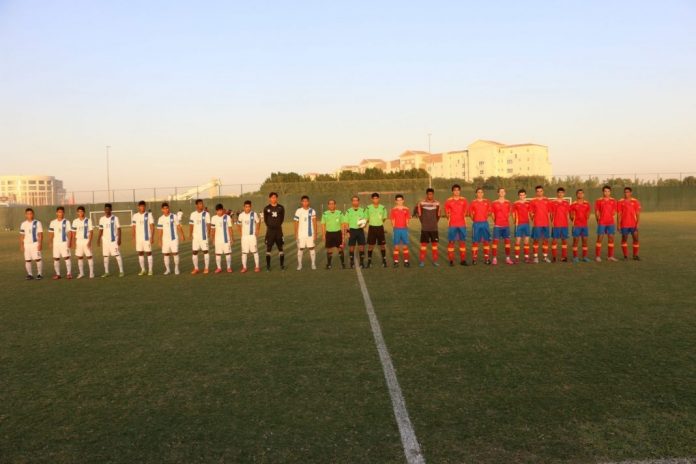 The India Under-16 National Football Team have been at Dubai Sports City in order to provide their players with real-time match experience as they begin long-term preparations for the 2017 FIFA Under-17 World Cup.

During their time in Dubai, the Indians played the resident Under-16 outfit of the Football Academy’s flagship Spanish Soccer School programme.

Nicolai Adam, the India Under-16 coach, was very pleased by the conditions in Dubai.

“I have worked in football my whole life. I have been to Dubai many times. This is the best location to work at this time of the year,” he revealed. “In Europe, it’s getting too cold, in India, it’s still too hot, and it’s just a short flight so Dubai is the place to come.”

Coach Adam went on to say that the facilities at the Football Academy suited his boys perfectly.

“We find everything we need here to prepare them professionally. We have perfect conditions here, we have a good hotel, we have a good training pitch, today we had a good opponent,” he explained.

“That was a good test match,” he added, reflecting on his side’s victory. “I wish in India that we would have something like this. In India, the right infrastructure is not there. Something like this as our national training center, that would be fantastic.

“I am used to good training pitches and good facilities but this is beautiful,” he finished.

The Indians, who will be hosting the prestigious tournament in two years’ time, beat off competition from Ireland, Azerbaijan and Uzbekistan to gain the rights to hold what will be their first ever FIFA tournament.

Should they receive positive feedback for the Under-17 World Cup, the All India Football Federation (AIFF) also have plans to host the Under-20 World Cup in the subcontinent’s largest nation.

Part of that preparation involves the experience they will gain from hosting the AFC Under-16 Championship, which runs from the 15thof September to the 2ndof October next year.

“We have a plan for almost the next two years,” added coach Adam. “We need good facilities and good opponents. What we need is exposure. Wherever we can find those, we will go there.”

Football Academy Director Michel Salgado was thrilled to have the Indian team here.

“I am really proud as Director that they count on us to do preparations for the World Cup,” said the Real Madrid legend. “We try to educate our kids through football and I think the level of our coaches is amazing, it’s outstanding. It is something that is calling not only Dubai but all other countries.

“We are doing really well,” he added. “They know what we’ve been doing for the last two years. We prepare our kids really well. The level of our coaches and the level of our kids and overall I think it’s the pedigree we’ve got with our football.”

The Kingdom of Bahrain today received its first batch of the Covishield - AstraZeneca COVID-19 vaccine, manufactured in India by the Serum Institute of...
Read more
Inside Bahrain

Batelco and Wanclouds have signed a partnership to deliver Multi-Cloud Migration solutions, which is being introduced to Bahrain for the first time. Wanclouds, an...
Read more
Inside Bahrain

The National Health Regulatory Authority has approved the emergency use of Covishield, the Covid-19 vaccine produced by AstraZeneka in cooperation with the University of...
Inside Bahrain

The Information & eGovernment Authority (iGA) launched an updated version of its interactive conferencing system, eMeeting, which has been revamped to include several performance-enhancing...
Life Quotes

Most of us, to achieve any goal are advised to have self-control and self-discipline. For instance stop eating carbs, ground yourself to study. These...
Inside Bahrain

The National Taskforce for Combating the Coronavirus (COVID-19) has announced in today’s press conference that the new COVID-19 variant has been discovered in Bahrain. Precautionary...
Sports This Week

Under Armour, has officially opened its very first brand house in the Kingdom of Bahrain. The new store is located in the premier shopping...
PR This Week

K.G. Baburajan has played a pivotal role in the development of the Kingdom of Bahrain for the past four decades. Starting with Saudi-Bahrain Causeway,...
© GO ALIVE MEDIA
MORE STORIES

The National Taskforce for Combating the Coronavirus (COVID-19) provides an update...