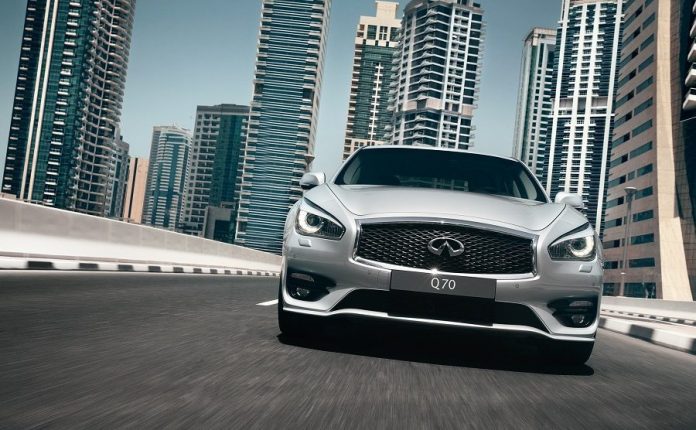 Infiniti continues to build on success

with record-breaking performance in the Middle East

Infiniti in the Middle East continued to build on its Q1 success registering an impressive first half performance for 2015. As one of the fastest growing premium automotive brands in the region, Infiniti delivered 4,200 vehicles to customers at a growth rate of 24.6% – which is four times the pace of the premium automotive market.

Numbers for the month of June were of particular note as Infiniti delivered 825 vehicles to customers at a comparative growth rate to the previous year of 63% – making it the best June in the history of Infiniti in the Middle East.

Infiniti’s all-new Q50 has been a resounding success here in the Middle East. Equipped with two new world’s first production performance technologies – Infiniti Direct Adaptive Steering™ technology and Active Lane Control™, 889 units were delivered to customers in the first half of 2015 at a growth rate of 314%.

Infiniti’s SUV line-up continued to build on its regional successes. The Infiniti QX50 led the way with a growth of 60%, whilst the QX60 accounted for a growth of 29%. The iconic QX70 and full-size QX80 continued to improve on year on year performance with increases of 7% and 5% respectively.

The network expansion into the Kingdom of Saudi Arabia last year has also started to show dividends with sales in the market increasing by 322% compared to the same period from the previous year.

Globally, Infiniti sold a record 103,500 new vehicles around the world in the first half of 2015, up 13% over the same period last year. On the back of a best-ever sales performance in 2014, Infiniti delivered another all-time-high result and for the first time sold more than 100,000 vehicles in the first six months.