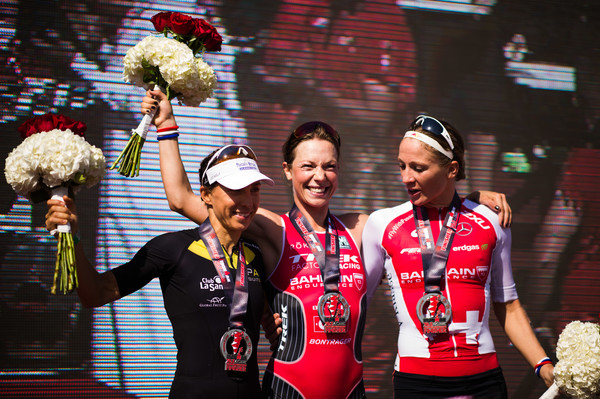 Bahrain Endurance athletes put on a valiant finish to their season at the Ironman 70.3 Middle East Championship, competing hard against one another in a spirited race to the finish line.

While Daniela Ryf and Javier Gomez were favorites to take the win and clinch the million-dollar Nasser Bin Hamad Triple Crown bonus, Holly Lawrence and Terenzo Bozzone put on a stellar show to finish ahead of them.

After failing to finish at the Ironman 70.3 World Championship which Ryf eventually won, Lawrence showed she belongs atop the podium with a scrappy performance that seemed a duel between the two before Lawrence got the upper hand early on the run. “Cannot believe I managed to pull off a win here in Bahrain,” she said. “I honestly thought I was racing for second place when Daniela dropped me like a stone on the bike, and then to have Anne Haug nearly run me down in the last couple of kilometers was stressful.”

While Ryf was pipped for runner-up in Bahrain by ten seconds at the finish line, she has had a stellar season winning dual world titles in Ironman and Ironman 70.3. She said, “Disappointed not to get the win today, but extremely happy with my season. Congratulations to Holly and Anne on great races. Now looking forward to a deserved off-season break.”

Bozzone was in flying form, overtaking Gomez over the bike leg to get onto the run with a three-minute lead to the rest of the field. It took a blazing run from Kristian Blummenfelt to deny Bozzone the win by 38 seconds.

Gomez finished in fourth place, feeling the effects of a long season. He said, “I didn’t have the legs on the bike and too many problems on the run, far from my usual level. Shame that all the hard work didn’t pay off this time, but that’s racing sometimes! It was hard to make it to the finish line, but I’m happy I did it! Well done to the guys on the podium, great race.”

David Plese finished in 10th and Fredrik Croneborg in 20th.

While not racing individually, Alistair Brownlee and Jan Frodeno supported the event by swimming and running on a team with Bahraini athlete Ahmed Maden tackling the bike leg.

His Highness Shaikh Nasser Bin Hamad Al Khalifa won his division and booked his Ironman World Championship slot for next year, bringing him one step closer to fulfilling his Kona dream.

Bahrain Endurance congratulates His Highness on this achievement. “A huge congratulations to our team captain, Shaikh Nasser Bin Hamad Al Khalifa on an amazing race and qualifying for the Ironman World Championship in Kona,” commented Bozzone.

Southern Governor His Highness Shaikh Khalifa bin Ali bin Khalifa Al Khalifa met  through his virtual Majlis with a number of citizens from the...
Sports This Week