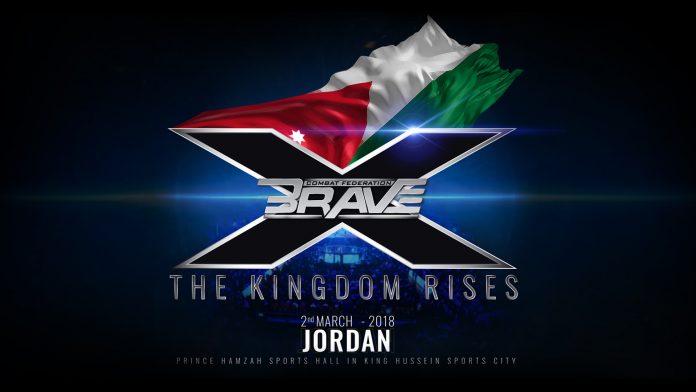 January 2, 2018
Facebook
Twitter
Pinterest
WhatsApp
Linkedin
Brave Combat Federation has announced that Jordan will host the tenth edition of the event on 2nd March, 2018. Brave X: The Kingdom Rises will be hosted in the Prince Hamzah Sport Hall at King Hussein Sports City, which is one of the special projects in Jordan and is the largest closed sporting hall in Jordan. Brave Combat Federation is found by His Highness Sheikh Khalid bin Hamad Al Khalifa, First Deputy President of the Supreme Council for Youth and Sports and the President of Bahrain Athletics Association. The sports media which is established in Bahrain is the fastest growing Mixed Martial Arts promotion in the world.
The sports promotion had been in the forefront featuring mixed martial artists from Jordan against International athletes. Jordan also becomes the first nation to host Brave in 2018. Within a year of commencement, Brave had hosted nine events in six nations around the world including Bahrain, UAE, Brazil, India, Mexico and Kazakhstan. The event is broadcasted across 84 nations to roughly 833 million fans and had been instrumental in bringing International media attention towards mixed martial arts in the Middle East.
“Brave Combat Federation is committed to develop the sport of mixed martial arts globally. Athletes from Jordan had proved from time and time again why they are one among the best in the sport, the event in Jordan is the culmination of their determination, dedication and achievements. Apart from nurturing the sport, we aim to nourish tourism, economic activities, employment opportunities and cultural exchange between Jordan and Bahrain”, said Mohammed Shahid, President of Brave Combat Federation.
Facebook
Twitter
Pinterest
WhatsApp
Linkedin
Previous articleKFH–Bahrain Honors Employees with “Fursan Baytik” Award
Next articleBahraini Ambassador In China Meets Huawei For ICT Talent Cultivation Summit