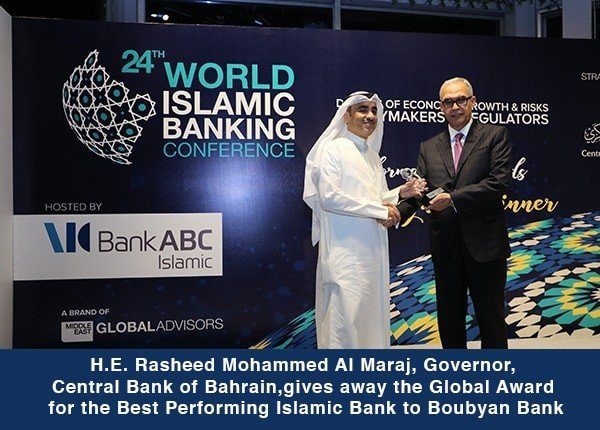 Under the patronage of HRH Prince Khalifa bin Salman Al Khalifa, The Prime Minister of the Kingdom of Bahrain, the 24th edition of The World Islamic Banking Conference (WIBC), the largest and most prestigious gathering of Islamic banking and finance leaders in the world, is presently taking place from December 4-6 at the ART Rotana Hotel, Amwaj Islands, in the Kingdom of Bahrain.

Convened by Middle East Global Advisors – a leading financial intelligence platform facilitating the development of knowledge-based economies in the MENASEA markets and in strategic partnership with the Central Bank of Bahrain, the three-day long forum is spearheading a series of discussions gravitating around the theme of “Drivers of Economic Growth & Risks: Policymakers & Regulators” in line with its steady vision to serve as a compass for the global Islamic finance and banking industry.

A true flagbearer for the conference and its ethos year-on-year, His Excellency Rasheed Mohammed Al Maraj, Governor, Central Bank of Bahrain, showcased his support for the event by delivering the opening keynote address at the 24th World Islamic Banking Conference, with the vision of furthering the ecosystem for Islamic finance entities to thrive and grow globally.

Recognizing the size and scale of the Islamic Bank market, His Excellency Rasheed Mohammed Al Maraj, Governor, Central Bank of Bahrain, in his keynote address mentioned, “In line with subdued economic activity in the region, Islamic Bank asset growth has also slowed from the 14-15% historical levels and projected, to grow at around 5% per annum for the next couple of years. The number of Islamic Banks however has grown to around 172 with another 83 or so Islamic Windows within conventional banks. According to the IFSB, the industry now employs more than 380,000 people worldwide, which reflects a significant level of economic activity by any measure.”

A notable highlight of the proceedings of Day 1 was the keynote address by Alex Tapscott, CEO NextBlock Global, Co-Author of Blockchain Revolution & Founding Member, IMF’s High Level Advisory Group on Fintech. During his exclusive presentation on the blockchain revolution, Mr. Tapscott said, “The technology likely to have the greatest impact on Islamic finance has arrived and it’s called the Blockchain. The blockchain is the most important computer science innovation in at least a generation and represents nothing short of the second era of the internet. For 20 years we’ve had the internet of information which has been a really powerful tool for changing how we communicate and how we share information, but it actually hasn’t had as big an impact on commerce or on finance as many people may have hoped, and that’s because the internet is not a valued medium, it’s an information medium.”

Adding further, Mr. Tapscott said, “Blockchain on the other hand represents the first native digital medium for value, and therefore represents a new internet of value that promises to change basically every industry in the economy and transform the economic power grid and the old order of human affairs in very profound ways. I personally am delighted to be speaking at the WIBC about the potential of blockchain because we’re at a very important inflection point for the industry. How incumbents react to this new innovation will basically dictate whether or not they will succeed or fail. Should they choose to embrace it, to seek out new opportunities, and new markets, new products, and services, basically to do tomorrow what was impossible yesterday they will succeed, if they look to take this technology and apply it only to how they do business today, they will not succeed. And if they decide to shun it altogether they will likely fail.”

Mr. Tapscott’s keynote address was followed by the exclusive launch of the ICD-Thomson Reuters Islamic Finance Development Report 2017, based on the Islamic Finance Development Indicator which is a unified barometer that assesses the performance of all the parts of the Islamic finance industry, hence arming Industry practitioners with critical insights going forward.

The day ensued with an exclusive one-on-one interview with distinguished Islamic finance veteran – Adnan Ahmed Yousif, Chief Executive and President, Al Baraka Banking Group, on his vision for the next 40 years of Islamic Banking. The interview focused on lessons from the past, the analysis of the current state of the industry and the future of Islamic banking.

Expressing his vision for Islamic Banking in the next 10 years, Mr. Yousif said, “Islamic banking assets’ share will increase from 15% to 25-35%. The primary growth drivers will be regionalization, digital acceleration and innovative business models for emerging markets. There is ample room for growth as Islamic banking rarely exceeds a third of total market share, even in the Gulf Cooperation Council (GCC) countries and Malaysia. Several potential markets with large Muslim populations remain largely untapped, such as India and the Commonwealth of Independent States countries, made up of the former Soviet republics. In addition, overall banking penetration in many of the industry’s core markets is still low. Fully exploiting the Islamic banking niche, which means targeting customer segments that care most deeply about Sharia compliance in their financial dealings as well as offering products and services that meet not only general financing but also Muslim-specific customer needs. As competition intensifies, Islamic banks will have to adopt more sophisticated, customer-centric sales approaches.”

Interestingly, the conference also proved to be the ideal Launchpad for ALGO Bahrain – the world’s first Fintech Consortium of Islamic Banks to enable Islamic banks for the paradigm shift in the banking industry as a result of financial technology (Fintech). The consortium aims to launch 15 FinTech platforms by 2022.

Other exclusive launches at the conference include Wahed Invest’s launch of the world’s first halal robo advisor – a unique way of revolutionizing halal investing by using technology. After successfully launching in the US, Wahed has announced its plans to launch in the Middle East in 2018. The conference also played host to the official book launch of “Islamic Real Estate Investment Trusts” by Hamed Yousef Mashal, a senior investment manager at Kuwait Finance House.

Other key highlights from the day included the digital-banking focused panel and Panel discussions focusing on dynamic capital markets, sustainable, equitable & inclusive growth, potential of disruptive technologies and new horizons for Islamic finance. Leading industry experts analyzed the challenges at hand and focused on coming up with effective suggestions with the ultimate aim of developing a convergence roadmap for the Islamic Finance industry at large.

Other winners of the 24th Annual WIBC Performance Awards include: