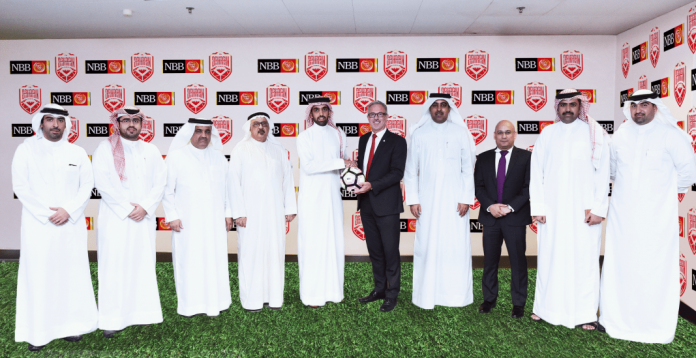 The Bahraini Football Association (BFA) announced NBB as the Lead Sponsors for the 2017/2018 season Football League, which is set to kick off on 9 September 2017.

NBB’s sponsorship of the league was announced at a ceremony held in the presence of senior representatives of the BFA and NBB. These included BFA Vice President and Head of the National Team Committee, Shaikh Khaled bin Salman Al Khalifa, and Head of the Investment Committee and BFA Board Member, Mohammed Al Hammadi, alongside a number of BFA officers. Representing NBB was the Bank’s Chief Marketing Officer, Richard Hicks, Board Secretary, Nasser Mohammed, and Marketing Manager, Hisham Abu Alfateh.

Commenting on the occasion, Shaikh Khaled bin Salman Al Khalifa, said, “We are delighted to announce NBB’s support and sponsorship for the BFA Super League. NBB has long been a pioneer and an investor in the development of our communities. NBB’s support for Bahraini sports and, in particular, this investment in football, will go a long way towards bolstering our efforts to further raise the bar and enhance the BFA Super League. It is also a significant and positive move for the Bahrain’s National Football team and its growth and success. We look forward to working closely with NBB to ensure the benefits of its support are maximised for Bahraini football, our communities and the Bank itself.”

Richard Hicks, Chief Marketing Officer at NBB, added, “We are pleased to sponsor the BFA Football League for the 2017/2018 season. This is an exciting opportunity for the Bank and reflects our deep commitment to and long-standing tradition of providing support for important community based initiatives – including sport. Since the Bank’s establishment 60 years ago, NBB has been a growth partner for Bahrain and we continue this role not only in the provision of banking services, but also in our desire to support Bahrain and Bahraini’s excel across all levels. We are confident that the resources we are investing into the league and with the young and dynamic management team heading the BFA, that we are together taking an important step forward for further progress and excellence in Bahrain sport.”

NBB’s sponsorship comes as part of the BFA’s efforts to attract cooperation from the private sector and generate greater audience support and attendances at matches.  The league plans to introduce a number of new initiatives this season to drive interest and participation including new competitions and raffles to engage audiences and ensure an exciting season for Bahraini football.

Director General of the International Organisation for Migration (IOM), Antonio Vitorino, praised the efforts made by the Kingdom of Bahrain to rectify the conditions...
Read more
PR This Week

As part of its efforts to contribute towards serving members of society during this time, and in line with the efforts of the Royal...
PR This Week

Zain Group, a leading mobile telecom innovator in eight markets across the Middle East and Africa, has teamed up with the Mentor Arabia Foundation,...
iGA

stc Bahrain, a world class digital enabler, will be hosting a series of virtual panel discussions, bringing together industry leaders and government entities on...
Entrepreneurial Journey

The Ministry of Health has announced the timings of the health centres and the Salmaniya Medical Complex (SMC) during Eid Al Fitr holiday as...
© GO ALIVE MEDIA
MORE STORIES