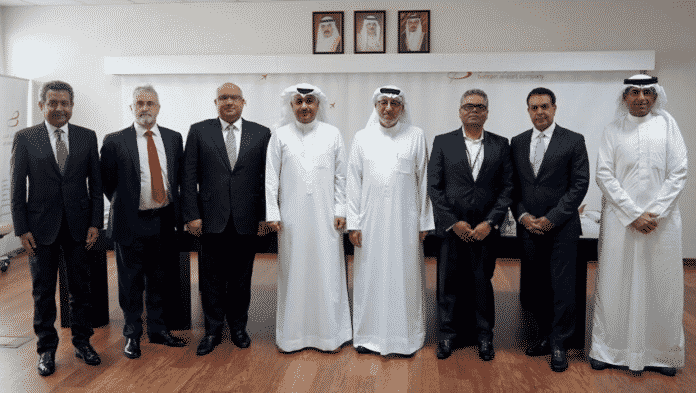 The Board of Directors of Gulf Air Aviation Group (GFG), Bahrain Airport Company (BAC), and Gulf Aviation Academy (GAA) held their second meeting of 2019 under the chairmanship of the Group Chairman, His Excellency the Minister of Transportation & Telecommunications, Eng. Kamal bin Ahmed Mohammed, at GFG’s headquarters in Muharraq.

Following the revision and approval of the minutes of the previous meeting, the board discussed planned BAC and GAA projects as well as reports on subsidiaries Hala Bahrain, Bahrain Jet Fuel Company, Bahrain Airport Services Company, and Bahrain Duty Free.

The board also reviewed GFG executive management reports on commercial projects related to the development of the new Passenger Terminal Building, including plans to enter into strategic partnerships with the private sector for the construction and development of an airside transit hotel as part of the Airport Modernisation Programme.

In addition, BAC’s Executive Management delivered progress reports on the construction of Bahrain International Airport’s new Passenger Terminal Building, which is in its final stages. The board also reviews followup reports from Fraport AG Frankfurt Airport Services Worldwide regarding the ongoing operational readiness trials taking place at the new terminal, which will ensure its systems, processes and procedures are in place for the launch.

Attendees were also briefed on the progress of ongoing familiarisation and contractor training sessions to acquaint team members with the new terminal’s IT systems and other stateof-the-art equipment used at security checkpoints, registration counters, and luggage areas. The training session are progressing at a rapid pace, with participants making continued progress, and the frequency is expected to accelerate in the coming months.

The Board stressed the importance of this next stage in light of the Kingdom of Bahrain’s aviation sector experiencing rapid growth in both aircraft traffic and passengers, with passenger numbers reaching 709,000 in May this year compared to 666,000 during the same period in the previous year, according to Civil Aviation Affairs statistics.

The Board of also discussed Gulf Aviation Academy’s plans for expansion through the addition of modern equipment and the introduction of new aviation and logistics training programmes that will enhance the academy’s capacity and efficiency, enabling it to meet the growing needs of this important sector.

HE the Minister of Transportation & Telecommunications expressed his sincere thanks to the Board members for their dedicated efforts in promoting initiatives to develop the civil aviation sector in Bahrain. He said that the efforts of companies operating in the aviation sector need to be consistent with the Kingdom’s economic development plans by helping to increase the government’s non-oil revenues.

HE the Minister added that the measures taken recently have significantly improved the performance of GFG, strengthening the company’s management of its assets. This needs to be built upon in the coming period for GFG to realise all its goals, including improving the country’s investment in aviation infrastructure, achieving positive key performance indicators, and strengthening the strategic and financial management of subsidiary companies.

Zain Bahrain, a leading telecommunications provider in the Kingdom virtually hosted the 4th edition of ‘Zainnovate’ in partnership with Alkeri Partners, a Bahrain based...
Read more
PR This Week

The Ritz-Carlton, Bahrain continues to elevate the guests’ experience by providing innovative solutions to provide a safe experience amidst the COVID-19 global pandemic with...
Read more
PR This Week

CrediMax announced its latest feature on its Loyalty program “Thameen” where cardholders are now able to redeem their points and “donate” to the Royal...
Read more
PR This Week

Malabar Gold & Diamonds, one of the largest global jewellery retailer has opened two new showrooms in India as part of its global expansion...
Read more
PR This Week

Bahrain’s efforts to combat the novel coronavirus (COVID-19) were highlighted during a webinar held under the theme: “Webinar for Parliamentarians: COVID-19 and Climate Change”. A...
Read more
PR This Week

Named after a rare species of beautiful birds-of-paradise, Cendrawasih, this Balinese dance is a relatively new dance with choreography inspired by classical dance routines....
Read more

Zain Bahrain, a leading telecommunications provider in the Kingdom virtually hosted the 4th edition of ‘Zainnovate’ in partnership with Alkeri Partners, a Bahrain based...
© GO ALIVE MEDIA
MORE STORIES