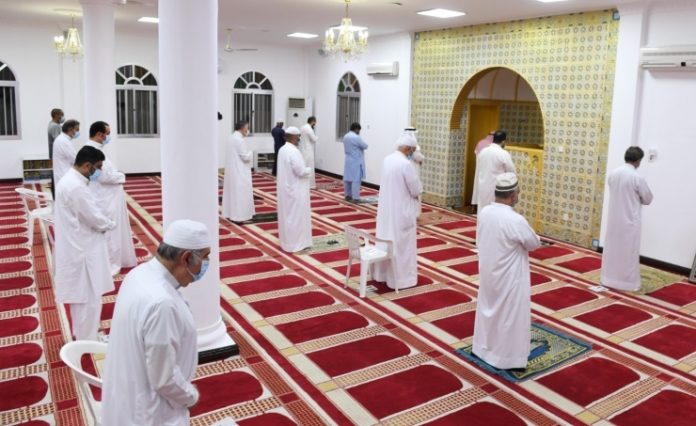 Worshippers have performed the morning “Fajr” prayers in mosques across Bahrain, amid mandatory measures for combating the novel coronavirus COVID-19).

This is the first time mosques reopen countrywide after collective prayers in worshipping venues were suspended last March 23, due to the outbreak of the pandemic.

The Supreme Council for Islamic Affairs (SCIA) also announced the gradual reopening of mosques for collective prayers, amid precautionary measures.

The ministry banned gatherings and crowding at the gates of mosques during entry and exit, and imposed a minimum two-metre distance between people to avert infections.

Under the ministry’s strict guidelines, worshippers have to leave the mosque after praying and perform Sunnah prayers (optional additional prayers) at home.

People who feel certain that their presence in the mosque will make them or others fall sick should be denied entry to the mosques and clear and deterrent penalties put in place to ensure compliance with the precautionary measures.

The ministry has also directed to shut the ablution places, bathrooms, toilets, refrigerators and water taps completely, urged worshippers to perform their ablution  before heading to mosques, bring their own prayer rugs and then take them home after praying.

Worshippers must at all times wear face masks and have their temperature checked before entering mosques to ensure they are free of COVID-19 symptoms.

The guidelines make it mandatory to use hand sanitisers and disinfectants for clothes before entering, leave doors of the mosques open before and after prayers to ensure easy access and exit, and to prevent human contact as much as possible, with the handles being regularly sterilised after each prayer.

The ministry has also banned the use of Quran books and instructed worshippers to read verses, using their own Quran books or cell phones, and avoid shaking hands.

Mandatory physical distancing has to be maintained between worshippers, in addition to sterilizing chairs and limiting their number to the minimum necessary.

Bahrain and India have agreed to the implementation of the Air bubble arrangement between both countries. Bahrain is one of the countries India has...
Tech

Zain Bahrain, a leading telecommunications operator in the Kingdom of Bahrain, fuelled by the passion to empower Bahraini youth with specific skills, recently announced...
iGA

Obtaining or renewing visas in the Kingdom of Bahrain is a relatively simple procedure. All you need to do is ensure that your documents...
© GO ALIVE MEDIA
MORE STORIES