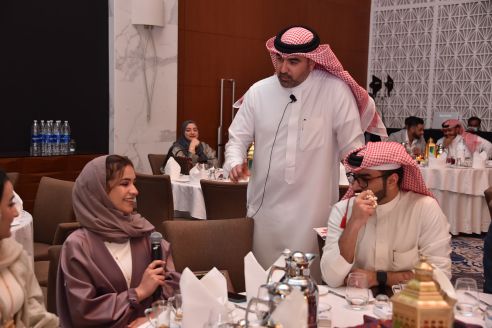 The National Bank of Bahrain (NBB) hosted its long-awaited Annual Ramadan Ghabga on Friday, 15th April 2022, at the Gulf International Convention Centre in the Gulf Hotel after a two-year break. Attendees present included Mr. Farouk Yousuf Khalil Almoayyed, Chairman of NBB, along with the Bank’s Executive Management Team, and the Bank’s employees, accompanied by their family members and friends.

The Ghabga was organised by NBB’s Social Committee and was attended by over 750 guests, making it one of the largest Ramadan gatherings in the Kingdom this year. Employees enjoyed a delightful evening filled with the Ramadan spirit, accompanied by interactive entertainment, including quizzes, prizes and a raffle draw. During the event, NBB’s ‘Neqsatna’ team were also awarded for their exceptional efforts and hard work during the launch of the second edition of the ‘Neqsatna’ initiative.

NBB staff members were excited to be back together to celebrate this Holy Month. This initiative reflects NBB’s commitment to investing in its employees’ welfare, promoting the well-being of the Bank’s partners in success through catering to their needs and requirements.