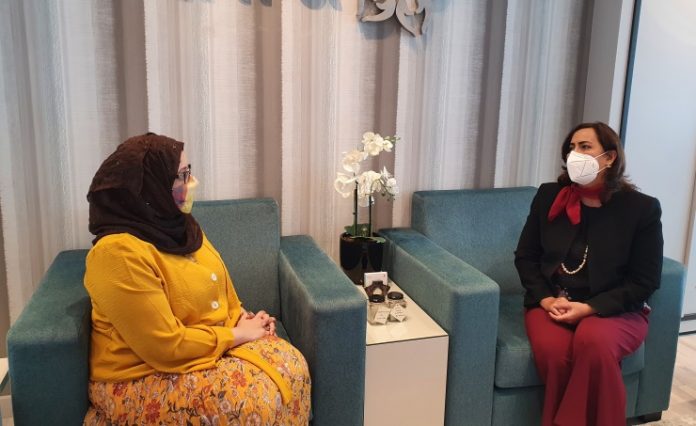 Only three hospital approvals have been pending due to measures adopted in light of the coronavirus and they should be completed before the end of this year, she told Bahrain News Agency (BNA).

Dr. Al Jalahma said that NHRA, in light of the vision and directives of His Majesty King Hamad bin Isa Al Khalifa, is moving forward with a high level of independent oversight that guarantees justice, transparency and quality and ensures assessment, monitoring and auditing.

The NHRA CEO stressed Bahrain’s success thanks to the efforts of the government headed by His Royal Highness Prince Khalifa bin Salman Al Khalifa, the Prime Minister, and the support of His Royal Highness Prince Salman bin Hamad Al Khalifa, the Crown Prince, Deputy Supreme Commander and First Deputy Prime Minister, in drawing up advanced and integrated health policies.

Such a system guarantees boosting Bahrain’s health indicators according to quality standards, she added, confirming that all workers in the health work within a national vision and under the Team Bahrain spirit.

She said that the Health Facilities Regulatory Department has issued 81 new licenses and renewed 657 licenses for existing facilities, in addition to carrying out 943 inspection visits, an increase of 35% over last year, resulting in the identification and correction of 1,599 irregularities, including 455 violations related to the safety of the facility.

The Clinical Research Unit received four requests for clinical research with half of them conducted in the government sector. They included the adoption of clinical research related to a drug useful in treating Sickle disease fits. The largest clinical trial in Bahrain is the coronavirus vaccine trials that were carried out at the highest level, she added.

The department conducted 731 inspection visits that contributed to the detection and correction of 962 violations, 38% of which were drug related and 16% heat and humidity related. The 22% increase in the number of visits is linked mainly with hiring additional pharmacy inspectors.

Dr. Al Jalahma said that NHRA noted a 13% increase in cases of complaints submitted to the Medical Complaints Unit.

The unit received 257 complaints, including 167 from individuals, 33 from healthcare facilities, and 57 from judicial authorities.

Technical investigation committees were able to complete the investigation of 177 cases during 2019, which represents an increase of 53% over the previous year. The disciplinary committees issued 37 disciplinary measures, including 10 cases of license suspension, 18 warnings, and the revocation of a professional license.

The NHRA achievements culminated in obtaining in the best government practices award for public administration research in the Middle East and North Africa region, which was presented to the authority after the successful implementation of accreditation of health institutions in the Kingdom.

As a future step, the authority seeks to automate all its procedures, including renewing licenses for health facilities, adding or changing services, and registering medicines and medical devices.

Dr. Al Jalahma said that the health sector in Bahrain is witnessing the launch of associated industries, such as the establishment of a factory for masks in Bahrain to meet the needs of the Kingdom, especially after the outbreak of the coronavirus pandemic and the fact that some countries prevented their export.

Other support industries include medical laundries and the provision of healthy meals.

“We granted licenses to drug home delivery companies according to certain requirements, while providing refrigerators with certain temperatures that guarantee the safety of the drug. We have a factory project for the production of medical supplies to detect viruses, and we hope to establish a second pharmaceutical factory that will produce emergency medicines to meet our shortage, in addition to four new factories for nutritional supplements and vitamin drinks that will complement the current factory,” she said.

Dr. Al Jalahma stressed Bahrain’s outstanding regulation of the health sector, saying that that the existence of a Supreme Council of Health that draws public policies and of independent oversight by an independent national authority boosts the prosperity of the sector.

“Dealing with complaints and having an institution concerned with investigating them guarantee justice and transparency, especially that we receive medical complaints related to treatment and not administrative problems related to appointments, for example,” she said.

“Such reasons may lead to a delay that may reach up to a year. But rights are guaranteed and there are specialized and independent committees at different levels,” she said.