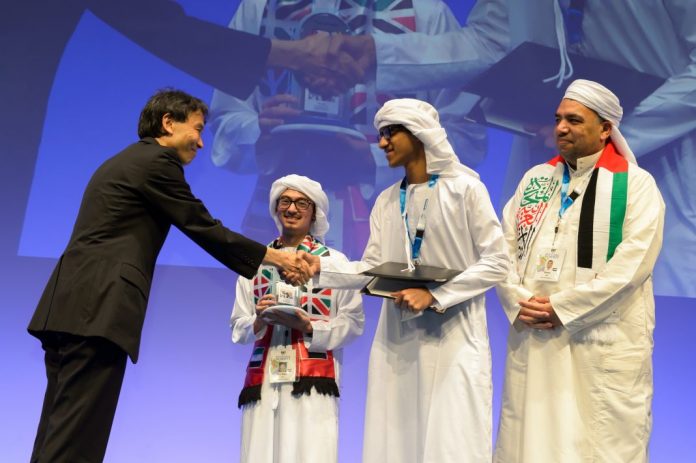 The team from Elite Private school Abu Dhabi clinched the winning spot under the ‘Global Citizen’ category in the Kid Witness News (KWN) Contest 2017, organized by Panasonic. The award ceremony this time was held as a part of the first-ever KWN Global Summit 2017 Week, held in Tokyo from August 1 to 5.

Two Grand Prix winners and winners of six other categories were also felicitated at the event, which brought together around 100 participants from 26 schools. At the KWN Global Summit 2017, the Kid Journalists representing their regions gathered information about their own country, other countries, and Tokyo to present their proposal to a future society. The children’s ideas included a society where people help each other and recognize diversity, a society where people can live the way they want to, a society without inequality, and a society that develops technologies that allow people to live in happiness.

The two winner groups from the Middle East were chosen to attend the global summit through KWN Regional contest organized by Panasonic Marketing Middle East & Africa. The Elite Private school team produced their winning video titled ‘Afflictions’ that covered the issue of people dealing with Post Traumatic Stress Disorder (PTSD) and getting their life back on track with the support of the community around them. The second regional winner Indian School Al Ghubra chose to inspire people with the key message “Be fearless in the pursuit of what sets your soul on fire” through their video titled “Legends Are Not Born, But Made!”.

A very excited member of the UAE team, Mohammed Firaz, said, “Winning something is always a special feeling, and my excitement knew no bounds when our school’s name was announced for the Global Citizens Award. At first, I couldn’t believe, we won one of the top honours in the KWN competition. We will cherish that moment forever.”

Another team member Christopher Kieth L. Manalo said, “I am glad that we were able to spread the message of tolerance and touch the hearts of people. Seeing those happy faces congratulating us, is a moment I would want to relive. Getting a chance to visit Japan is one thing, but winning the Global Citizens Award made it all so special for us. We want to share this success with everyone who supported us in creating the video, especially our teachers, without their guidance we wouldn’t have reached here, and of course Panasonic and KWN for giving us this opportunity.”

Ms Afaf Rady Ghanem, Improvement Consultant, Elite Private School expressed gratitude and said, “Thanks to Panasonic for providing our students with a platform to showcase their creativity.  The film was written, produced, directed by the students, and aimed to deliver a message to the world about unity in the UAE, a noble principle that combats discrimination and isolationism. We hope this will inspire our students to participate in such national and international contests. This also marks the success of our Creativity Centre, which is a pioneering programme for technology education at Elite Private School. The centre was established to mark the year of innovation.”

“We would like to congratulate both teams from the region for their success, and hope that their videos will inspire people across the world to unite. Panasonic continues to support education through the KWN activity, and we strongly believe that the Generation-Y will play an important role in shaping a sustainable and peaceful future. Their voices are expressed in their video creations. This will inspire people to unite, take action and share our vision of ‘A Better Life, A Better World’. Our hope is that this program will embolden our future generations to dream and to pursue their dreams,” commented Anthony Peter – Director, Corporate Communications Division, PMMAF.

The KWN is a hands-on video education program that Panasonic operates as part of its efforts to support education, and more than 180,000 children have participated in this program to date. This is an interactive educational program in which participating schools are supplied with video equipment and the videos they produce are judged in contests every year. This year saw around 5,000 people take part from 18 different countries and region around the world, with submissions received from 343 schools.

The five-minute videos were produced on three broad themes – “communication,” “environment,” and “sports” – as the children offered their own unique perspectives on issues close to them like sports, global environmental problems, and people who have dealt with families, disabilities, and PTSD.

Panasonic will soon announce the KWN 2018 Contest dates for schools across the Middle East Region.

stc Bahrain, a world-class digital enabler, is the first telecom operator in Bahrain to venture into Roadside Assistance and Home Assistance services, expanding its...
Read more
Sports This Week