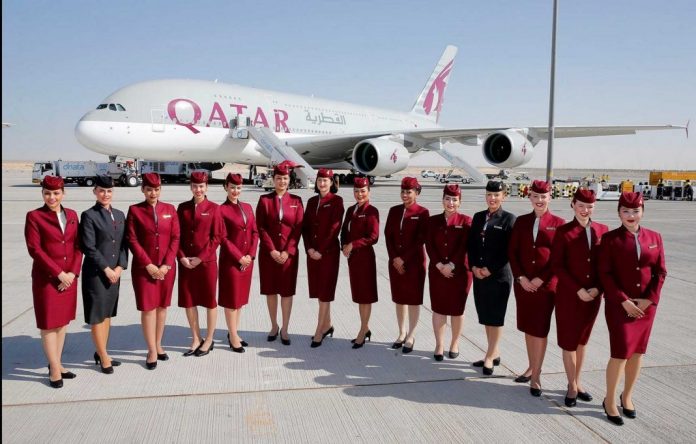 Qatar Airways concluded a successful week at the Dubai Airshow, showcasing three of its latest-generation aircraft, the Airbus A350, A380 and the airline’s 25th Boeing Dreamliner, the B787.

His Highness Sheikh Mohammed bin Rashid Al Maktoum, Vice President and Prime Minister of the UAE, and Ruler of Dubai, toured the airline’s A380 during the Royal Tour on the first day. The tour was led by His Excellency Mr. Jassim Seif Ahmed Al Sulaiti, Minister of Transport for the State of Qatar, and Qatar Airways Group Chief Executive, His Excellency Mr. Akbar Al Baker. Among the official delegation was also Mr. Abdullah bin Nasser Turki Al-Subaey, Chairman of the Qatar Civil Aviation Authority.

During the Dubai Airshow Mr. Al Baker also hosted meetings with notable dignitaries including Ms. Violeta Bulc, European Commissioner for Transport; Ghazi Zaiter, Lebanon’s Minister of Public Works and Transportation; and The Honourable Mr. Nathan Deal, Governor of the U.S. State of Georgia. In addition, the U.S. Ambassador to the State of Qatar, Her Excellency Ms. Dana Shell Smith, joined Mr. Al Baker and Boeing Commercial Airplanes President and CEO Ray Conner for a special ceremony on the second day of the airshow to celebrate the airline’s 25th Dreamliner delivery.

Over the course of the week it is estimated that more than 1,000 airshow guests and media toured Qatar Airways’ aircraft.

Mr. Al Baker commented: “Qatar Airways was central to the aircraft on static display at this year’s Dubai Airshow, with three of our finest aircraft present. This demonstrates the significant growth of our fleet in recent years, enabling Qatar Airways to showcase to the aviation industry the world’s very latest aircraft and interior product types, including the A350, for which Qatar Airways was the global launch customer.”

The A380 entered service with Qatar Airways last autumn and Qatar Airways received the A350 as Global Launch Customer in December 2014.

The A350, which entered service in January, now flies double-daily to Frankfurt, triple-daily to Singapore and daily to Munich. The Business Class cabin has 36 seats in a 1-2-1 configuration featuring an 80-inch fully flat bed and 17-inch HD in-flight entertainment screen and a spacious inflight lounge. Economy Class features 247 18-inch wide seats in a 3-3-3 configuration, each with a 10.6-inch in-flight entertainment screen, and more space at shoulder level for passengers in window seats due to the vertical side wall panel design.

The 517-seat A380 aircraft comprising of First, Business and Economy Class over two decks, is the largest passenger jet in the world, and currently flies to Bangkok, Paris and London from Doha in the State of Qatar. The new First Class A380 features a seat with a 90-inch pitch that transforms into a fully flat bed and has up to 2,000 entertainment options displayed on individual HD 26-inch television screens.

Qatar Airways’ Boeing 787 Dreamliner has a two-cabin configuration, comprising of 22 seats in Business Class and 232 Economy Class seats with a class-leading standard of comfort on board, including individual 10.6-inch television screens for all Economy Class seats and an award-winning food and beverage service.