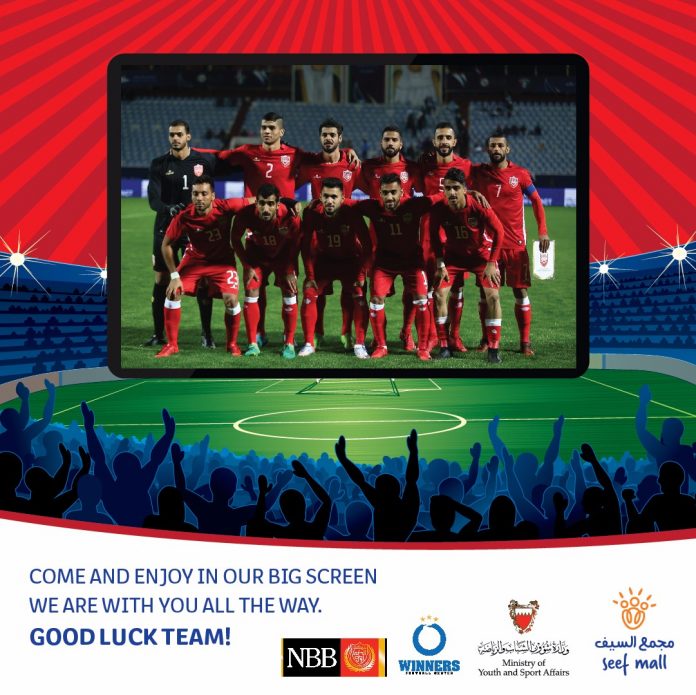 In line with supporting the national football team, Seef Properties, the leading real estate development company in the Kingdom of Bahrain, will be placing a large screen at the West Wing of Seef Mall, Seef District to broadcast the Bahrain national football team’s match with Oman in the 23rd Arabian Gulf Cup, at 4pm today. The mall will also host various entertainment activities before the match kicks off as well as during the half time.

This event is being held in cooperation with the Bank of Bahrain and Kuwait, the Ministry of Youth and Sport Affairs and the Winners Football Center.

Under the guidance of His Highness Shaikh Nasser bin Hamad Al Khalifa His Majesty the King’s Representative for Charity and Youth Affairs, Chairman of the Supreme Council for Youth and Sports, and President of the Bahrain Olympic Committee, Seef Properties always strives to support all teams representing the Kingdom of Bahrain across the region which raise the country’s stance internationally, and looks forward to the victory of the national football team and its further achievements.

Seef Properties, a leading real estate development company in the Kingdom of Bahrain, was established in 1999 as a publicly listed company on the Bahrain Bourse.

Seef Mall has been the leading premier shopping hub and entertainment destination in the Kingdom of Bahrain since 1997, and still continues to attract a large number of visitors from neighboring GCC countries through its diverse selection of international brands, variety of restaurants, and wide range of entertainment facilities for adults and children to enjoy.

Electricity and Water Affairs Minister, Wael bin Nasser Al-Mubarak, received here today the representative of the third constituency of the Northern Governorate at the...
Read more
PR This Week

Lulu Hypermarket is celebrating its 13th anniversary of being a retail leader in the Kingdom of Bahrain with a grand ‘Shop and Win’ e-raffle...
Inside Arabia

Bahrain’s own Hamza Kooheji earned perhaps the biggest victory of his career as he walked away with a split decision win over Aidan James,...
Spotlight

Having earlier introduced a number of traffic services such as Payment of Traffic Conventions and Issuance of International Driving Licenses, the National Portal bahrain.bh...
iGA