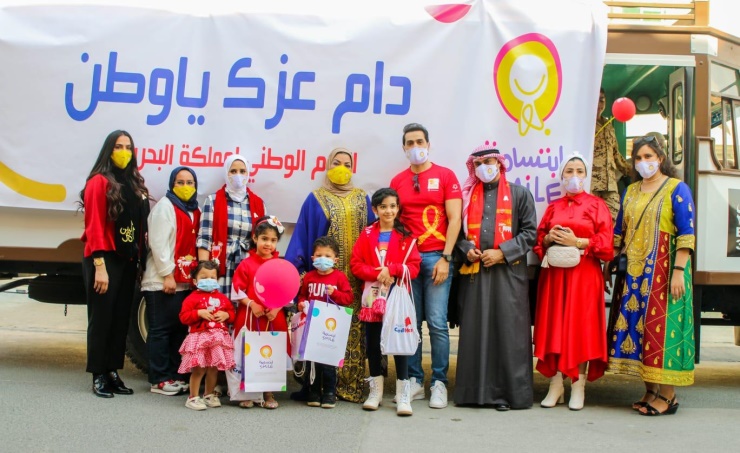 Smile Initiative, an initiative of Bahrain Future Society for Youth, which provides psychosocial support to children with cancer and their parents in the Kingdom of Bahrain, celebrated the glorious National Day of the Kingdom of Bahrain and the twenty-first anniversary of His Majesty the King’s Accession to the Throne, by distributing gifts to children with cancer, who are affiliated with the initiative, in their homes in the diverse governorates of Bahrain.

The initiative’s volunteers worked in small teams to distribute these gifts using a decorated bus, which contributed to bringing more joy and pleasure to sick children. The event also included introducing children to the origin of the National Days in the Kingdom of Bahrain and the implications of celebrating them.

Chairman of Future Society for Youth, Mr. Sabah Abdul Rahman Al Zayani, confirmed that “Smile” initiative worked to organize this event despite the challenges of the pandemic, within its keenness to celebrate the national holidays, and as a reminder of the great civilizational achievements and the process of prosperity and development in light of the reform project of His Majesty the King, and the major gains of this project at all levels.

Al Zayani hailed the efforts of the “Smile” volunteers in organizing the event, and their keenness to take all precautionary measures to prevent COVID-19 infection, including sterilizing gifts before distribution, and maintaining social distancing, to protect the health of sick children, who have mainly weak immunity as a result of cancer.

“We congratulate HM the King and the people on the occasion of the National Day and the anniversary of His Majesty’s accession to the throne. We pray to God Almighty to preserve the Kingdom of Bahrain and perpetuate the blessing of security and safety.” Al Zayani concluded.