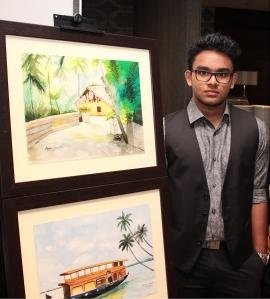 Aamir Kudel, a seventeen-year-old Indian artist in Dubai, recently conducted his debut solo exhibition in Dubai with a series of 13 exquisite works of art titled ‘Visions of Life’ painted with oil on canvas.

The star-studded event was held at Marriott Hotel Al Jaddaf, Dubai in the presence of Indian Consul-General in Dubai His Excellency Vipul; Aamir’s parents Mr. Zulfeq Kudel and Mrs. Lasitha Zulfeq, along with his teachers and other dignitaries.

Aamir is a Grade 12 student at the Emirates International School and aspires to be an engineer by profession. Hailing from the Indian state of Kerala, he has won accolades in a number of national and international art competitions.

By passion, the teenage prodigy hopes to create artworks that evoke a sense of warmth on life, nature, culture and people. With the painting series titled ‘Visions of Life’, Aamir envisages the world and life through new dimensions, a plethora of vibrant colors and meticulous attention to detail.

These conceptual works of art express Aamir’s vivid imagination, visions and dreams on the real life. His thoughts and concepts are all life-related, drawn from the real experience of life and inspired by the purity and freshness of ‘mother nature’.

Being an expatriate resident in Dubai, Aamir gets inspired by this amazing city, its culture, the visionary leadership and the incredible transformations whilst preserving nature that he witnessed.

An avid Van Gogh fan, Aamir Kudel believes that to understand life, one must indulge in the creation of art.

Speaking on the exhibition, he said, “This is my dream come true. I am extremely thankful to my parents and my sister for believing in me and backing me up all the way. I am honoured to have the Indian Consul-General in Dubai HE Vipul among others in the exhibition. I am very happy to bring my work to the world and the appreciation has been overwhelming. Through my first collection I have tried to portray different aspects we see every day, be it a passing season, the skyline of our city, and the wildlife among other things.”

Standing in front of one of his works, Aamir says, “I visualize a brighter world and believe in a brighter future to see the world through an array of colours. Art is my passion, and it brings out the best in me. It’s my chosen medium of self-expression; for my thoughts, dreams, experiences and even my deepest fears in a visual manner. Oil on canvas, my music and I find bliss. My work is vibrant and involves a lot of colours.”

Each painting tells a story — ‘Pride’ portrays a horse in action expressing courage, and dedication and loyalty; and ‘Freedom’ shows a wide-eyed eagle, which is ready to soar above the storm and fly to freedom, among others.

The dual works titled ‘Dubai though my eyes’ is portrayed as the pulse of Dubai, and detailed as a mirror of consequence and the proof of a phenomenal accomplishment. “A fog of great toil, rising up in the day, raising the grandeur of the world. The buzz of a worthy opulence, reflecting at night. A tribute to the years of streamlined discipline,” he gets creative.

Aamir becomes philosophical with the artwork titled ‘A moment of peace’: “Amongst the concrete jungle, away from the hustle and bustle of survival struggle, exists a calm space. Relish the divine frame. Have a moment of peace. Take a deep breath,” the caption reads.

Aamir is also a dedicated philanthropist at heart. He is coming up with a project named ‘Aksharam’ in his hometown at Malappuram in Kerala. With this project, this teenager’s plan is to refurbish and establish the English library of a government school, which was also his grandfather’s alma mater.

He is inspired by the UAE’s two great initiatives — the Year of Reading in 2016 and the Year of Giving in 2017. “These programmes were not just inspirational for me; it’s a phenomenon that spurs action across the globe,” Aamir concluded.