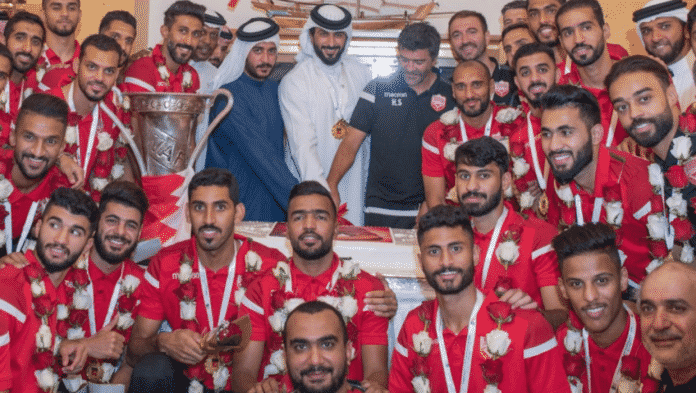 HH Shaikh Nasser bin Hamad Al Khalifa, Representative of His Majesty the King for Charity Works and Youth Affairs, and President of the Supreme Council for Youth and Sports conveyed the regards and appreciation of HM King Hamad bin Salman Al Khalifa to the Bahrain national football team members on their well-earned 1-0 victory against Iran’s national football team in the joint qualification matches for FIFA World Cup 2022 and AFC Asian Cup 2023, held at Bahrain National Stadium.

HH Shaikh Nasser addressed the players, “Thank you so much! This is a well-deserved victory. The best is yet to come. You defeated the best Asian football team and this proves that you are capable of beating anybody. We have full confidence in your abilities and from our side, we will provide you with the best environment to reach the desired goals.”

He further added: “You had a fantastic game and you gave wholeheartedly gave yourself, striving for each ball. Your sportsman spirit has allowed you to overcome one of the best Asian teams. We are very happy with this result and the performance. We are powerful on achieving one of the goals that we had set, which was to qualify for the World Cup through the current qualifiers. It’s our dream to see Bahrain is playing in the World Cup,”

HH Shaikh Nasser remarked on the upcoming matches, stating “Now we will look forward to the upcoming games with full focus.”

It’s worth noting that HH Shaikh Nasser had celebrated the 1-0 victory of Bahrain against Iran by hosting a luncheon for the team. A special cake was also made on this occasion, which was cut by HH Shaikh Nasser.

The National Bank of Bahrain (NBB) has announced that it is has extended its support to its Commercial and SME customers impacted by the...
Management Principles

Following the directives of the Government encouraging caution and social distancing, and in line with its continuous efforts to safeguard the well-being of its...
Sports This Week

Zain Bahrain, a leading telecoms operator in the Kingdom, has introduced Be Safe initiative to encourage customers to utilise all Zain digital channels to...
iGA