It was Mrs. Khan who made the first contribution of BD 20 towards this cause and as the family remembers, they brought biryani to people, starting with the watermelon vendor near their residence in Saar. “We started buying biryani from a kitchen in Seef, near my office. That was the place my office staff used to order biryani from, and I loved its quality and taste. During those days, we used to run out of biryani even before we left the Seef district,” Mr Khan reminisces. “The workers can now identify us from our cars and there are many who actually wait for us every week. It is not just about the food but also about having conversations with them and it sort of gives them the happiness of opening up.” The team who began distributing twenty to fifty packets of biryani every week have been successful in distributing close to 500 packets of biryani during the month of Ramadan.

When asked about choosing biryani over all the other Asian rice varieties, he answers with a smile, “I love biryani, so I wanted others also to have something I know is good to be eaten.” He then goes on to a serious note, “But if you take a closer look, biryani comprises so many different colours, because of the variety of ingredients that go into it. Like the perfect blend of various ingredients ending in just the right biryani, it is the combination of people from all over the world, irrespective of their colour or beliefs that create a harmonious community.”

Mr. Khan is very particular about the quality of the biryani he shares. “I have been travelling around Bahrain in search of the best biryani. And trust me, I have never had so much biryani as I have had in the last few months, in my entire life,” he laughs. “We recently changed the place from where we buy biryani. And we are really glad that the owner of the new place understands the meaning behind our activity and not just delivers the food on time, but also stays on for distribution.” When it comes to distribution, the part played by his ten year old son and five year old daughter cannot go unmentioned. It was a pleasure to learn from Mr. Khan that his son contributes to the biryani budget from his pocket money and has bought a pair of gloves to protect his hands from burning while distributing hot packets of biryani. And daddy’s little princess is in charge of distributing water to the workers. “Last week we had Coca Cola coming forward to sponsor the beverages that were distributed with the food,” Mr. Khan tells us. 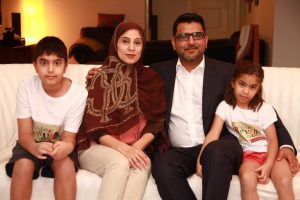 The next set of plans that this bighearted man has in mind completes the cycle of contributing rightfully to the society we belong to. “I am looking at taking this process one step up the social ladder. I am trying to see if the money that we spend on buying biryanis from restaurants can be given to those needy women who can cook exceptionally well. One of my friends had referred a lady to me whose husband has been unemployed for a while. We will be trying out her biryani sometime this week and then we will see if she can also work in collaboration with our current biryani supplier. ” Mr. Khan has everything planned and budgeted to perfection. “I am an accountant by profession and it helps me keep track of and also properly plan the money that comes in. We even have people coming from Saudi joining us in distribution. Last week when we were at a construction site distributing food, the site manager came forward and added a small amount as his contribution. It is not about the amount of donation, but the space in your heart that matters.”

What if someday he won’t be able to feed these many, we ask Mr. Khan. To which he smiles and says, “I don’t know if I will be able to feed hundreds, but still, I will feed at least one with whatever I have, even if it means I will be preparing the food at home and distributing it.”