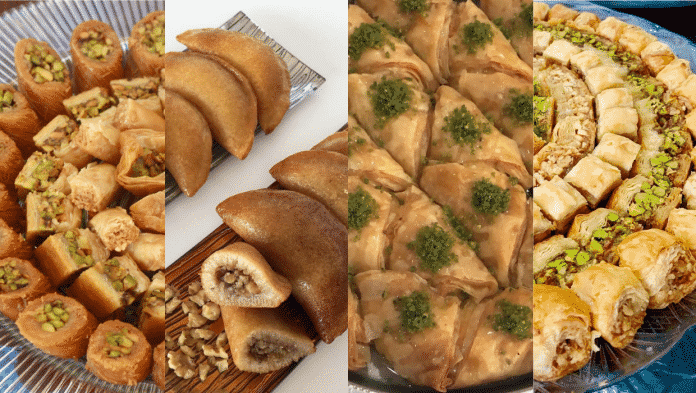 The Sweet Journey of Baladna Sweets and Café

When Nuha Hamdan came to Bahrain in 1990, little did she know that the island is going to be her home for years to come. She started her career in a marketing company, but left when her second child was born. As an energetic person, she decided to open own business in 1996, selling home accessories.

Yet fate had something else planned for her. One day, close to Eid, as she was sitting with her friends, she realized that there were no Arabic sweets available here in Bahrain similar to those in her homeland of Palestine. This generated an interest in her, and she began importing sweets from Jordan and became an agent and distributor of a Brand Name from Jordan. Ultimately, the business became successful due to a great demand for Middle Eastern sweets, such as Baklawa and Kunafeh.

Nuha Hamdan opened her first Branch in 2001, importing and selling Arabic Sweets such as all kinds of Baklawas and mamouls. The business was very successful and in 2006 she opened her second Branch and  started producing sweets locally by importing raw material from Jordan and added a variety of other Middle Eastern sweets to the menu.

Ultimately, she started catering for hotels especially during Ramadan. Due to the business’s success and the business started evolving and decided to producing all kind of Baklawa and Maamoul locally From A To Z and  , import a minimal amount of raw material and purchase the rest from the local market .

Two years ago she changed the name of her Business and Branded her sweets as BALADNA SWEETS . She produced a variety of sweets from Halawet El Jiben to Kenafeh, Balurieh, Barazek and Dawleeb el Hawah  and all kind of Mammoul for Eid and many more.

Facebook
Twitter
Pinterest
WhatsApp
Linkedin
Previous articleExplore Bahrain during your stay with Bahrain.bh
Next articleIdentity Chip Update Transactions Jump by 15% in 3 Weeks with Opening of Service Centers on Saturdays

Bahrain dishes are famous for their taste with a combination of different flavors from other Arab kitchens. We can clearly see the impact of...
Read more
Taste of Tradition

Stepping into Falooda World Cafe, you will get the impression of a standard bakery. The entrance is filled with sweet sticky-notes of past customers...
Read more

If you’re looking to renew your ID card or need other services related to it, remember that there’s no need to invest time and...
Read more
PR This Week

The National Taskforce for Combating the Coronavirus (COVID-19) held a press conference at the Crown Prince Center for Training and Medical Research at the...
Tech

Education Minister, Dr. Majid bin Ali Al-Nuaimi, has affirmed that the Ministry of Education has succeeded in ensuring the continuity of its educational services...
Inside Bahrain

Zain Bahrain, a leading telecoms operator in the Kingdom, has implemented a series of precautionary measures to protect both its customers and employees during...
Inside Bahrain

The Kingdom of Bahrain is trying to overcome the circumstances caused by the novel coronavirus (COVID-19) under the eminent leadership of His Majesty King...
Yoga

In keeping with food security amidst the global outbreak of the Coronavirus COVID-19, Lulu Hypermarket has airlifted a special food consignment on a chartered...
© GO ALIVE MEDIA
MORE STORIES