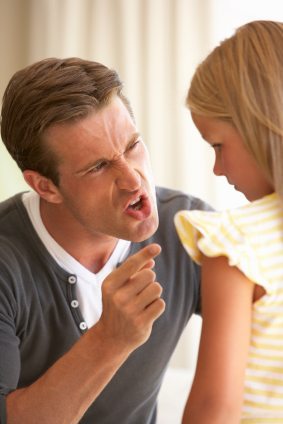 The way we talk to our child becomes their inner voice

Parenting is the most important “job” most of us will ever do and for which most of us are completely unprepared. Having seen a Father relentlessly screaming at his daughter in the mall on the weekend, I could almost feel something inside of the child, shrivel and die. I hugged our own daughter closer and observed the mother and two siblings say nothing. I recognized my own anger in the Father, borne from frustration and perhaps lack of sleep and felt thankful my parents didn’t ever explode like that.

The type of discipline you use can have a dramatic effect on your child’s development and have a big impact on the type of relationship you have with your child. Researchers have discovered four types of parenting styles. These different styles are dependent on what the parent feels the child needs from them. As a result, each parenting style uses a different approach to discipline.

Authoritarian parenting is where parents establish the rules and expect that children will follow them without exception. Children have little to no involvement in problem-solving challenges or obstacles. Instead, parents expect that children will follow all of the rules, all the time “Because I said so.” Children are not usually given the reasons for the rules and there is little room for any negotiation. Authoritarian parents may use punishments instead of consequences.

Although children who grow up with authoritarian parents tend to follow rules much of the time, they may develop self-esteem problems. Sometimes children become hostile or aggressive as they may focus more on being angry at their parents for the punishment rather than learning how to make decisions and solve-problems.

Authoritative parents also have rules that children are expected to follow, however, they allow some exceptions to the rule. They often tell children the reasons for the rules and they are more willing to consider a child’s feelings when setting limits.

Authoritative parents tend to use consequences instead of punishments. They also use more positive consequences to reinforce good behaviors and may be more willing than authoritarian parents to use reward systems and praise.

Children raised with authoritative discipline tend to be happy and successful. They are often good at making decisions and evaluating safety risks on their own. They often grow up to be responsible adults who feel comfortable expressing their opinions.

When parents are permissive, they do not offer much discipline to their children. They tend to be lenient and may only step in when there is a serious problem. There may be some consequences for misbehaviors but they often develop the attitude that “kids will be kids.”

Permissive parents may take on more of a friend role than a parent role. They may encourage their children to talk with them about their problems but may not discourage a lot of bad behaviors.

Kids who grow up with permissive parents tend to struggle academically. They may exhibit more behavioral problems as they will likely not appreciate authority and rules. They often have low self-esteem and may report a lot of sadness.

Uninvolved parents tend to be neglectful. They often do not meet their children’s basic needs and may expect children to raise themselves. Sometimes this is due to a parent’s mental health issues or substance abuse problems. They may also lack knowledge about parenting and child development or may feel overwhelmed by life’s other problems.

Uninvolved parents tend to have little knowledge of what their children are doing. There tends to be few, if any, rules or expectations. Children may not receive any nurturing or guidance and they lack the much needed parental attention.

When parents are uninvolved, children tend to lack self-esteem and they perform poorly academically. They also exhibit frequent behavior problems and high levels of unhappiness.

Sometimes parents don’t fit into just one category. There may be times where they will be more authoritarian and their discipline strategies may vary, from child to child. When determining a discipline strategy, it is important to think about what it is that you want your child to learn. Effective discipline strategies can teach children to become responsible adults who are able to make healthy decisions on their own.

The various approaches to discipline can even influence a child’s mood and temperament into adulthood and of course affect their own parenting skills later. We must never forget we are not only parenting our child now, but we are parenting the next several generations.