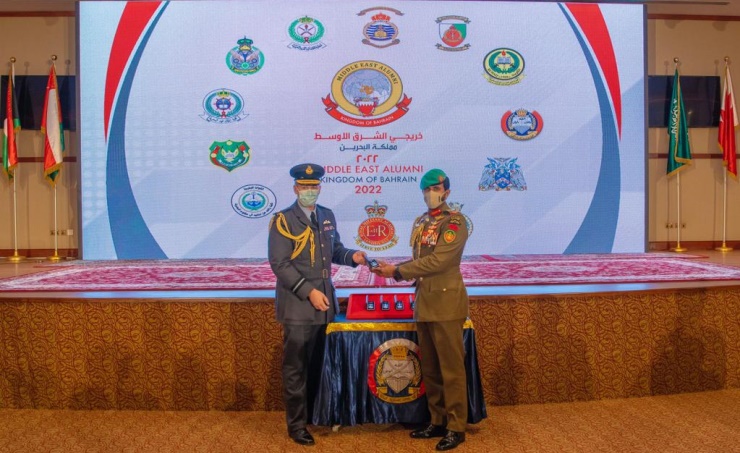 Upon arrival at the ceremony venue, the National Security Advisor, Royal Guard Commander, was welcomed by the Royal Guard Special Force Commandant, Lieutenant Colonel His Highness Shaikh Khalid bin Hamad Al Khalifa, and invitees from Commandants of land, air and naval military colleges and academies of the GCC and UK armed forces.

After a recitation of some verses from the Holy Quran, a video was shown on the participating colleges. Then, the National Security Advisor, Royal Guard Commander, delivered a speech in which he welcomed the attendees and conveyed to them the greetings of His Majesty King Hamad bin Isa Al Khalifa and his best wishes of every success to the international meeting.

Major General HH Shaikh Nasser bin Hamad Al Khalifa underlined the importance of the meeting for the Commandants of the military colleges and graduates from the GCC countries and the UK. He also stressed its role in exchanging military expertise and strengthening relations to achieve collective defence. He pointed out the change imposed by the coronavirus (COVID-19) pandemic in the training and work method, stressing resolve to overcome all challenges.

Air Commodore Andrew Dickens presented Major General HH Shaikh Nasser bin Hamad Al Khalifa with the college medal. He also honored the BDF officers who graduated from the RAF College Cranwell. Then, the Commandants of the colleges took a collective photo at the VIP hall. A collective photo was also taken with all the attendees in front of the college command building.