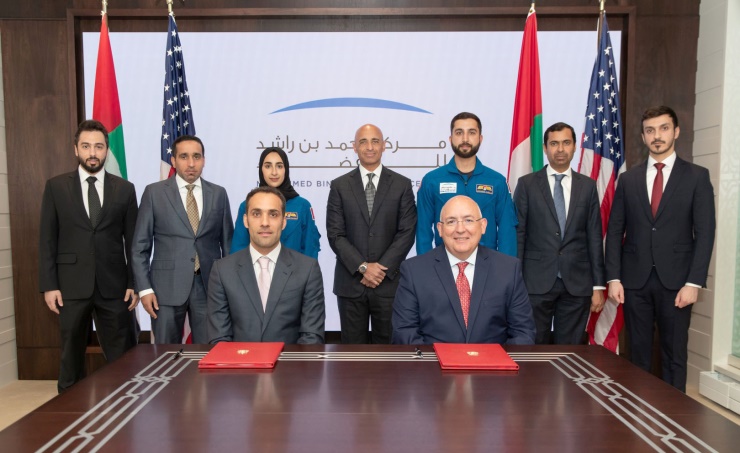 The United Arab Emirates has announced the launch of a new space mission to the International Space Station that will last for six months.

His Highness Shaikh Mohammed bin Rashid Al Maktoum, Vice President, Prime Minister and Ruler of Dubai, said: “We launched the ” UAE Astronaut programme” more than five years ago. The UAE sent the first Arab astronaut on a historic trip to the International Space Station… Today we announce a new cooperation between the UAE and the United States of America to send an Emirati astronaut on the first long-term mission aboard the International Space Station”.

His Highness Shaikh Mohammed bin Rashid Al Maktoum added: “Signing the agreement to send the first Arab astronaut in a long-term mission of 180 days to the International Space Station is new milestone for the UAE space sector. The UAE will be among 11 countries in the world that carried out long-term space missions.”

His Highness Shaikh Mohammed bin Rashid Al Maktoum said: “Our space sector is constantly evolving. The new mission will add new experiences and knowledge to Emirati astronaut and the scientific community”, the UAE will continue its ambitions in the space sector”.

The deal will further strengthen collaboration between the MBRSC and the American space agency NASA, as the two entities will collaborate extensively over the duration of the 6-month mission. MBRSC currently has four Astronauts training at NASA’s Johnson Space Centre in Houston, this training will prepare them for long duration human spaceflight.

The agreement between MBRSC and Axiom Space was signed at the Embassy of the United Arab Emirates in Washington, and Yousef Al Otaiba, UAE Ambassador to the United States, Hamad Obaid Al Mansoori, Chairman, MBRSC, and Yousuf Hamad AlShaibani, Deputy Chairman, MBRSC, along with astronauts Nora AlMatrooshi and Mohammed Al Mulla all attended the signing ceremony.

The agreement was signed by both parties: Salem Al-Marri, Director General of the Centre, on behalf of the Centre, and Michael Suffredini, President and CEO of Axiom Space.

In alignment with the announcement made by His Highness Sheikh Mohammed bin Rashid Al Maktoum, Vice President and Prime Minister of the UAE and Ruler of Dubai, Hamad Obaid Al Mansoori, Chairman of MBRSC, affirmed that the first long-term mission for Arab astronauts signifies the extraordinary progress made by the UAE National Space Programme. This momentous endeavor has been made possible as a result of the vision and ambition of the leadership of the UAE.

Al Mansoori commented: “The six-month mission duration will allow for in-depth and advanced experiments to be undertaken in space. Up until now, long-duration missions have only been accomplished by a small number of countries. The UAE will now rise to the ranks of this elite group after having entered the sector merely decades ago.”

He continued, “the agreement with Axiom Space, as well as the partnership with NASA are crucial milestones in this journey. They reflect the vision of the UAE, which positions space exploration as an opportunity for enhanced cooperation between countries and entities in pursuit of the common goals of scientific discovery, and a sustainable future for humanity. In the UAE, manned and unmanned space exploration programmes are progressing concurrently. This mission takes place alongside final preparations for the country’s lunar mission, and it will occur in the wake of the successful Hope Probe mission to Mars.”

Salem AlMarri, Director General, MBRSC said: “With the aim of strengthening cooperation between the UAE and the USA that involves prominent institutions such as Axiom Space in the space exploration sector, we are delighted to announce this important partnership that will help us further advance our space programme. This will pave the way for future initiatives that will contribute to strengthening the UAE’s position as a leading nation in the world of space exploration.”

He continued: “The cooperation with Axiom Space and NASA is of strategic importance to us, as it will kick off long-term, scientific research studies in space. This is a breakthrough moment for space missions in the UAE and the region.”

Michael T. Suffredini, President & CEO of Axiom said: “It is our great pleasure to sign the agreement with the United Arab Emirates’ Mohammed bin Rashid Space Centre, marking the first time a U.S. commercial company has made such a mission possible. Axiom is proud to provide MBRSC with a flight opportunity enabling the first long-term Arab mission to the ISS.”

The planned space mission to the ISS will include an Emirati astronaut and his counterparts from the US. The team will be conducting experiments and managing the operations of the station. They will be welcomed onboard the space station by a team of Russian cosmonauts as well as American and European astronauts.

The mission marks another important milestone for the UAE’s national space programme, where another Emirati astronaut will be sent to the ISS, which will be the longest amount of time that an Emirati or Arab astronaut has stayed in space. It comes after the historic feat of Hazzaa Al Mansoori who reached the space station aboard the Soyuz MS15 spacecraft on 25th September, 2019.

At the end of his flight, Al Mansoori returned to Earth eight days later bringing with him important data and information obtained from several scientific experiments he conducted during his stay.

With the success of the new mission, MBRSC hopes to inspire a new generation of Emiratis who will choose a career in the space industry and carry out research that will contribute to consolidating our position in the international space sector, where only a few countries have so far succeeded. “It is certain that the Emirati astronaut who will participate in the new mission will write a new chapter in the UAE’s aspirations to explore new worlds and provide practical support and real experience to benefit future generations of Emirati astronauts,” AlMarri added.

So far, only few countries have been able to send astronauts on long-term missions to the ISS, and the UAE is the latest country to join this elite list. Once the mission is completed, the Emirates will take the distinctive honor of being the first Arab country to undertake a mission involving a prolonged stay at the space station.