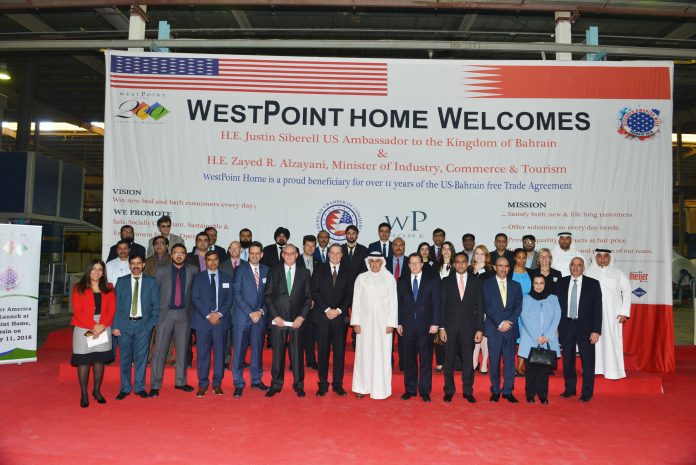 WestPoint Home Bahrain, a leading US home textile manufacturer, today announced the launch of “Discover America Week 2018” at its premises by the US Embassy Manama, organizers of the week, at a ceremony attended by the US Ambassador to Bahrain, H.E Justin Siberell, H.E. Zayed R. Alzayani, Minister of Industry, Commerce & Tourism, American Chamber of Commerce (AmCham) Bahrain President, Mr. Qays Zubi, and other US and Bahraini government officials.

During his remarks, Ambassador Siberell said, “We chose WestPoint Homes to launch our Discover America Week because is it a really good example of the cooperation that we have on-going between our two countries, Bahrain and the United States, in manufacturing.  And West Point Homes is a terrific example of a company that is benefiting from the Free Trade Agreement.” 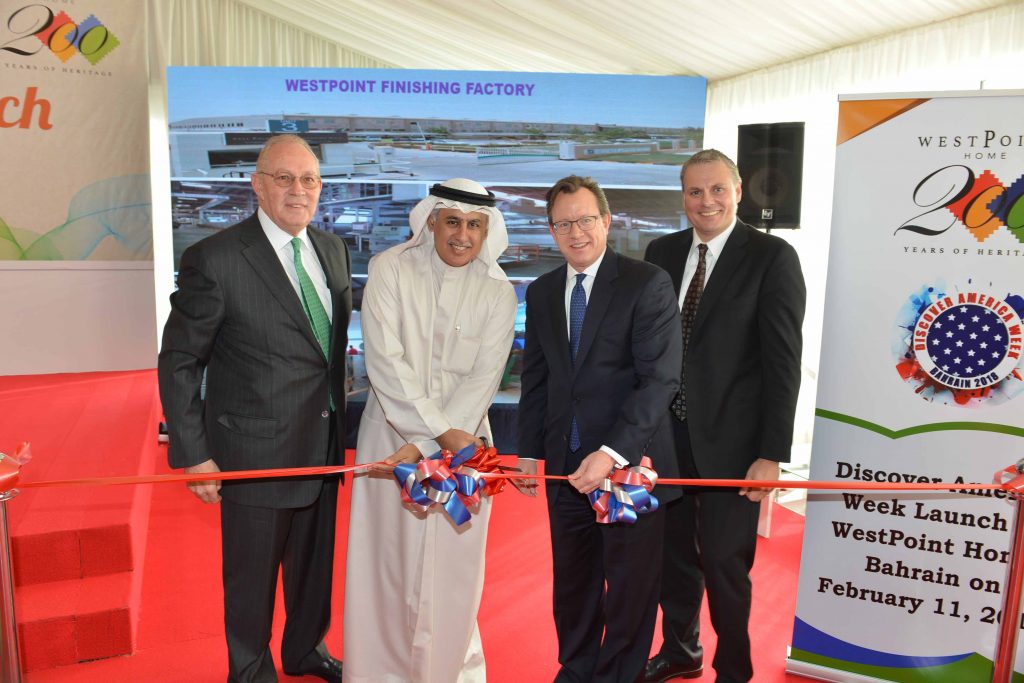 Speaking on the occasion, the H.E. Zayed R. Alzayani said,  “The long lasting trading relationship between the Kingdom of Bahrain and the United States of America goes back to the early 1900s with the establishment of the American Mission Hospital in Bahrain and continued today  on all levels including governmental and private sectors, and has contributed to the establishment of  deep economic, industrial and trade relations which have culminated in the  signing of the Free Trade Agreement between the two countries in 2004.” The Minister added,  “The Ministry of Industry, Commerce and Tourism was given the responsibility of the implementation of the Free Trade Agreement as of 2008 and has seen growing and tangible results from the agreement in the forms of a high volume of trade and various joint ventures, in addition to  a number of success stories, one of which is where we are today — WestPoint Home. The Free Trade Agreement contributed positively to the rise in bilateral trade volume between the two countries, which have nearly doubled.”

The Minister further stated, “ Clear evidence can also be seen of the growing partnership and cooperation between Bahrain and the United States  across a range of areas.  In November 2017, and on the side lines of the official visit of His Royal Highness Prince Salman bin Hamad Al Khalifa the Crown Prince, Deputy Super Commander and First Deputy Prime minister, a series of cross sector trade agreements were signed between Bahrain  and US entities  valued at $10 billion covering fields  trade, industry, oil and aviation, among others. Another example of this cooperation is the recent announcement that Amazon Web Services (AWS) is due to open its first regional headquarters in Bahrain.”

Bahrain over the past few years has carried out a thorough updating and revising of all Commercial, Industrial and Tourism laws with the view to eliminate obstacles and ease the process of setting up  businesses in Bahrain.

Also speaking at the ceremony, Mr. Steve Burns, Chief Operating Officer of WestPoint Home Bahrain, said, “We are delighted to see the launch of “Discover America Week” take place this year at WestPoint Home’s premises in Bahrain. The week aims to highlight the strong economic relationship between the US and Bahrain as well promote world-class American businesses and brands in the Kingdom. WestPoint Home is a shining example of one such brand and the significant opportunities for collaboration that exist between US companies like ours in Bahrain and vice versa. WestPoint Home is a 204-year-old home textile company that started in the southern US and today proudly operates our flagship manufacturing operations here in the Kingdom of Bahrain, where we produce the best quality home and hospitality textiles products, which are exported to the US and an expanding customer base in Europe, Asia and the GCC.” 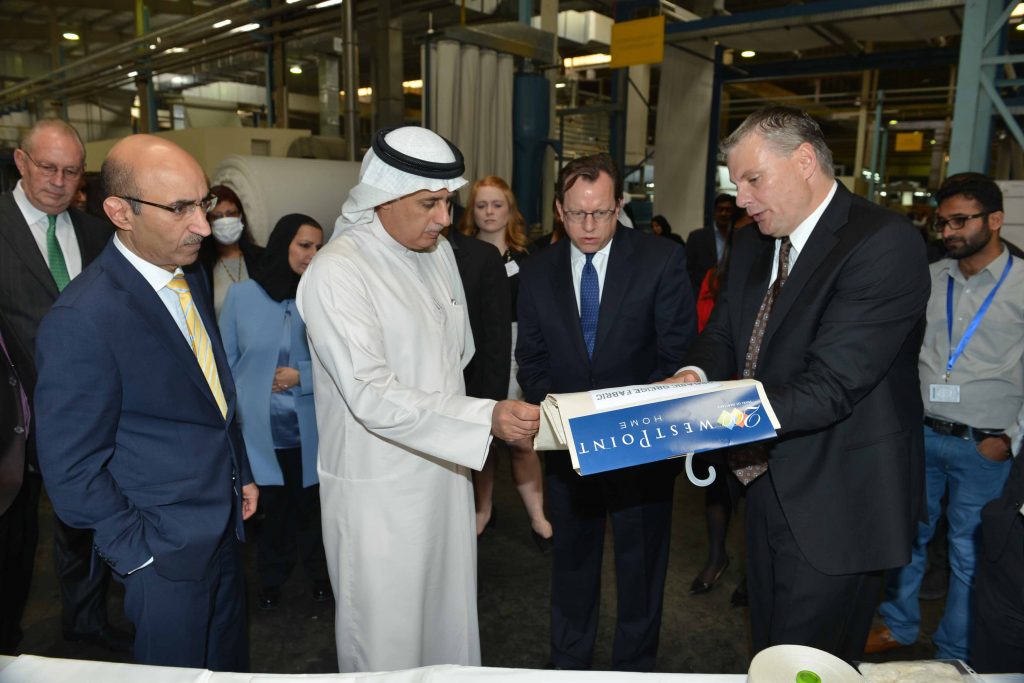 WestPoint owns four large manufacturing buildings in Bahrain comprising of spinning, weaving, finishing and fabrication facilities.  The company employs around 1,750 associates and maintains approximately 175 skilled local Bahraini workers. The company generates nearly $200 million of annual revenues globally, with greater than 50% of that as duty free-imports to the US thanks to the US-Bahrain Free Trade Agreement.  On average WestPoint benefits from an 8% duty benefit on those US imports. Since the establishment of WestPoint Home Bahrain, the Company has contributed about $1 billion to Bahraini exports.

As such, the Company’s Bahrain operations are both critical to the success of WestPoint Home and to the Bahrain economy. In order to maximize value creation, WestPoint continues to invest in its operations.  This time last year, the Company launched its $9 million dollar spinning capacity expansion.  This expansion allows for the spinning of more yarn in Bahrain helping to decrease lead times, increase flexibility that  along with other initiatives, help to mitigate the impact of the 2016 TPL expiration. This was followed by an additional $5 million investment for the installation of a second bleaching line and the installation of a state-of-the-art digital printing capacity and purchase of other support equipment.

Mr. Burns continued, “We   are very proud of the commitment we have shown to our operations in Bahrain where, since inception in 2006, WestPoint Home has invested over $165 million.  These investments, however, would not have been possible without the support and partnership that we have received over the years from various ministries and semi-government organizations.  This includes Tamkeen, who has recently provided us with a $1.1 million grant helping to fund our bleaching line and digital printing expansions. The Bahrain US Free Trade Agreement and the continued close working relationships with the government and other organization in the Kingdom has been critical to our success and competitiveness in the global marketplace.”

“Discover America Week” Bahrain, running from 10 – 15 February 2018, features a wide range of events, activities and promotions aimed at highlighting and bringing together American and Bahraini business and opportunities.