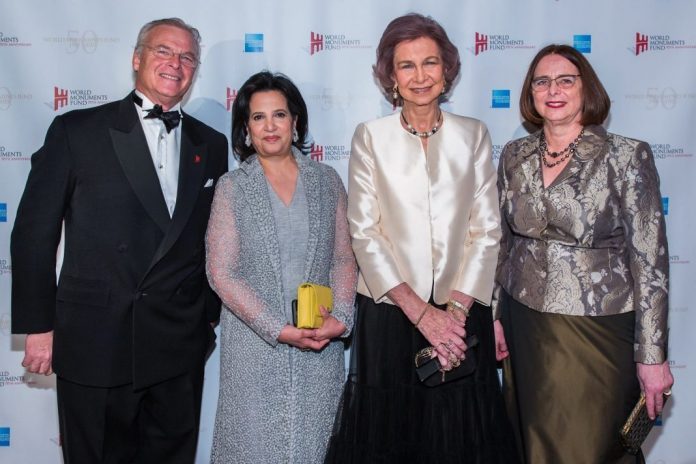 Her Excellency Shaikha Mai bint Mohammed Al Khalifa, the President of the Bahrain Authority for Culture and Antiquities, was honoured by the World Monuments Fund on 21st October 2015, for the role she plays in preserving and protecting world heritage, especially the traditions and culture of the Kingdom of Bahrain.

World Monuments Fund (WMF) is a private nonprofit organisation founded in 1965, working towards preserving the important artistic treasures throughout the world. The body has worked with local communities and partners to complete more than 600 projects at heritage sites worldwide around 90 different nations. Through fieldwork, advocacy, education and training, WMF and its affiliates help ensure a future for monuments, buildings, and sites around the globe.

Her Excellency received the ‘Watch Award’, alongside Her Majesty Queen Sofía of Spain at the twenty-eighth annual Hadrian Gala at Cipriani 42nd Street in New York City. Receiving the honour, H.E. Shaikha Mai confirmed that her award is a testament to ‎ preserving Arab heritage.

Bonnie Burnham, President of World Monuments Fund, said: “Queen Sofía and Shaikha Mai are both passionate advocates of cultural preservation in their countries. WMF is thrilled to honour them and their achievements on the occasion of our 50th anniversary.”

The Watch Award, introduced in 2011, was created to recognise extraordinary individual achievements that keep historic sites vital in the contemporary world. Previous Watch Award honorees were Andrew B. Cogan and Knoll (2013); The Duke of Devonshire KCVO, CBE DL (2012); and Marcella Pérez de Cuéllar (2011).

Her Excellency’s key initiative – ‘Invest in Culture’ had led to building an unprecedented partnership between the private and public sectors for heritage preservation, leading to the establishment of the Bahrain Fort Site Museum and the Bahrain National Theatre, the key cultural tourism attractions. In addition, Her Excellency champions youth capacity building programmes in the fields of heritage and culture development, and has established Taa’ Al Shabab, a Bahraini youth forum for emerging talent in which cultural dialogue is cultivated. Through her actions as historian, scholar, and activist, Her Excellency is also a symbol of empowerment for women not only in this part of the region but for the whole world.