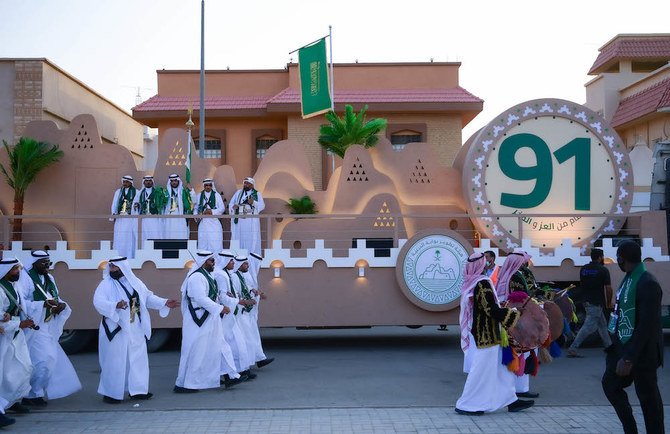 The Kingdom of Saudi Arabia was established on September 23, 1932 with Arabic as its national language and the Quran as its constitution. Since then, it has grown exponentially on all aspects of its society. From the towering skyscrapers of its cities to the booming population its economy is sustaining, Saudi Arabia has progressed and amazed the world since its foundation.

The theme of this year’s National Day is “Heya Lana Dar,” meaning “Saudi Arabia is Our Home”, inspired by deep Saudi traditions to welcome people from diverse backgrounds, make them feel at ease and appreciate all the great and beautiful things that make Saudi Arabia feel like home to them.

For it’s 91st Annual National Day, Saudi continues to show that there is much more to anticipate from them.

Saudi Arabia’ buildings, and other GCC countries, is seen bathed in green light for Saudi National Day. Dubai’s Burj Khalifa held a special projection commemorating the event with a special Saudi National Anthem performance at the Dubai Fountain. Landmarks and vital facilities across the Kingdom of Bahrain also lit up in the green colour. Some of the notable attractions that lit up on the day are: Ferrari World Abu Dhabi, Etihad Arena, Yas Island and establishments, Warner Bros World, Clymb, and W Abu Dhabi.

The Saudi Hawks Airshow also performed at Khobar, Jeddah, and Riyadh. It was organized by the Saudi General Entertainment Authority which featured the largest airshow with jetfighters and civil aircrafts taking part.

A show featuring parades, marches, music, and processions by Saudi’s Royal Guard was held at the capital, Riyadh.

The Saudi MBC group broadcasted a 14-hr special coverage of events from all over the country. This included a one-hour operetta sung by Saudi performers during National Day.

Businesses all over the country celebrated National Day with various National Day-themed events. The Saudi flag and the iconic green shade can be seen all around establishments. Saudi Airlines commemorated the National day with Saudi-themed decorations on its planes.

Multiple firework shows was also launched all around Saudi Arabia to be enjoyed by the public. The National Day Firework Show was held in Hail, Albaha, Tabuk, BuraidahKing, Abha, Madinah, Jazan, and Jeddah.

Radio and television hosts gathered several personalities from both nations, discussing the relations between the two brotherly countries, their shared history, achievements, and more.

Ever since its establishment by the founding King Abdulaziz bin Abdulrahman Al Saud, Saudi Arabia has been strong and self-confident in moving forward while honoring its leaders’ commitment to building a thriving state with advanced and successful political, economic, social, financial, educational, athletic, security and military characteristics.

The diversification of the economy, the empowerment of the society, the launch of mega projects across the Kingdom, the openness on the world and the robust commitment to peace, security and stability in one of the world’s most challenging regions are clear testimonies of Saudi Arabia’s progress.

The success in confronting the COVID pandemic and in dealing with its local, regional and international effects, including the Saudi crucial role in maintaining balance in the international oil markets, is another testimony how the Kingdom is well equipped to manage crises no matter how fierce their onslaught is.

The massive and ambitious projects launched under the Economic Vision reflect the Kingdom’s pragmatic view and realistic assessment of global developments and offer new opportunities to attract global investments, to provide wider employment options and enhance the overall well-being of the Saudi society.

The bold commitment to protecting the globe from the devastating
effects of climate change was very clear in the announcement of the Saudi Green Initiative and the Middle East green Initiative to plant collectively 50 billion trees.