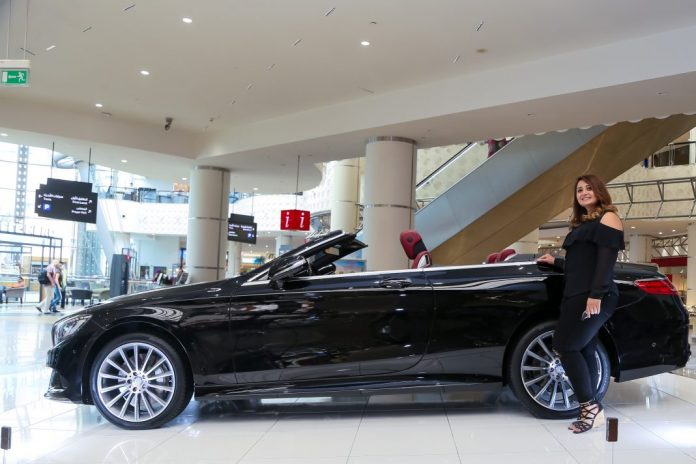 Sahara Centre, Sharjah’s leading retail, dining and leisure destination, has announced the first lucky winner of its exclusive ‘A Year of Happiness Like Never Before’ campaign – a three-month long opportunity that ran throughout Ramadan and will continue until 10th September. Syrian national Etab Khalil was the lucky shopper to drive away in the first of two Mercedes-Benz S 500 Cabriolets that are up for grabs during the campaign.

Commenting on the surprise win, Etab Khalil said: “I’m thrilled and overwhelmed to have won the Mercedes-Benz S 500 Cabriolet, and I would like to express my gratitude to Sahara Centre for giving me and all other customers the opportunity to win this amazing prize. I would encourage everyone to take part in Sahara Centre’s regular raffle competitions, because you never know when surprise finally struck you!”

The campaign has been launched in partnership with Matalan and aims to bring happiness to the mall’s customers during the holy month and beyond, supporting the government’s vision to make the UAE the happiest nation in the world. By spending AED 200 at Sahara Centre, customers can enter the raffle to win 1 of 2 Mercedes-Benz S 500 Cabriolets, or a year of free living expenses including house rent, school tuition for a child, shopping vouchers and utility bills such as electricity and water, Salik, telecommunication and petrol.

Sahara Centre is also offering its customers unique opportunities to up their odds in the grand raffle during the campaign. Receive five coupons when you spend at least AED 200 at Matalan or at any restaurants on 2nd level, East Atrium. Whilst female shoppers who spend AED 200 between 10am and 1pm can also double their chances of winning.

The grand draw will take place on Sunday 10th September at 7pm for the second car and the coveted living expenses package. Both draws will be held in the presence of a Sharjah Economic Development Department representative.

Sahara Centre continuously strives to offer its customers memorable retail experiences, including a range of raffle-based competitions that take place every two to three months. During its ‘A Year of Happiness Like Never Before’ campaign, Sahara Centre is giving away happiness and offering visitors ample opportunities to become winners at the shopping complex.

HH Shaikh Nasser bin Hamad Al Khalifa, Representative of His Majesty the King for Humanitarian Work and Youth Affairs has received, in the presence...
Tech