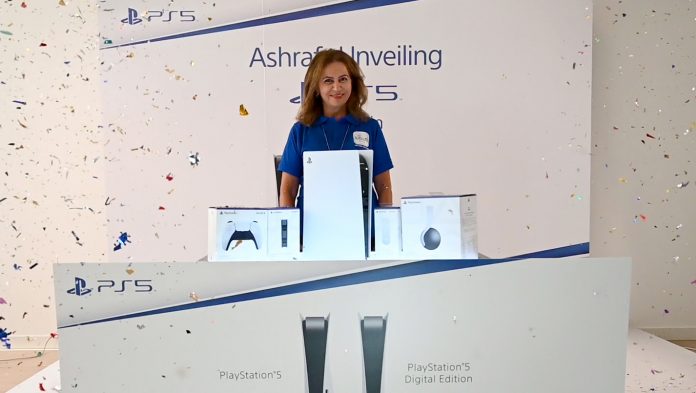 The long wait is over, Ashrafs W.L.L. had launched the ultimate gaming machine PlayStation 5, in Bahrain! Mrs. Amal Almoayyed, Executive Director, Ashrafs officially launched PS5. Ashrafs has made the launch sales online and Offline through a pre-booking process that was started in September 2020. On the launch day, the deliveries were executed strictly maintaining social distancing and other Covid protocols.

The new PlayStation 5 Ashrafs is 5.5 times as powerful as the PlayStation 4 and 2.5 times more powerful than the PlayStation Pro. Also the content at resolutions as high as 8K and frame rates up to 120 per second. The console contains a custom GPU from AMD based on its RDNA-2 architecture. Its peak performance is 10.8 teraflops. The variable-frequency CPU comes with a maximum clock speed of 3.5 GHz alongside a unique storage solution that can be expanded later on as per customers’ needs.

Both the PS5 and its Digital Edition have the same exterior looks. It comes in two tones – white and black with white dominating over black. Sony PlayStation 5 exteriors are extremely sleek and smart which grabs everyone’s attention in one go. The front panel of PlayStation 5 consists of one USB-A 2.0 port one, one USB-C port, and a power button while the rear part consists of two USB-A 3.0 ports, a gigabit Ethernet port, an HDMI 2.1 port, and power input.

Sony PlayStation 5 is accompanied by a wireless controller, the DualSense. It connects with the console via Bluetooth 5.1. The dual sense features touchpad, six-axis motion sensing, a mono speaker, and a headset.