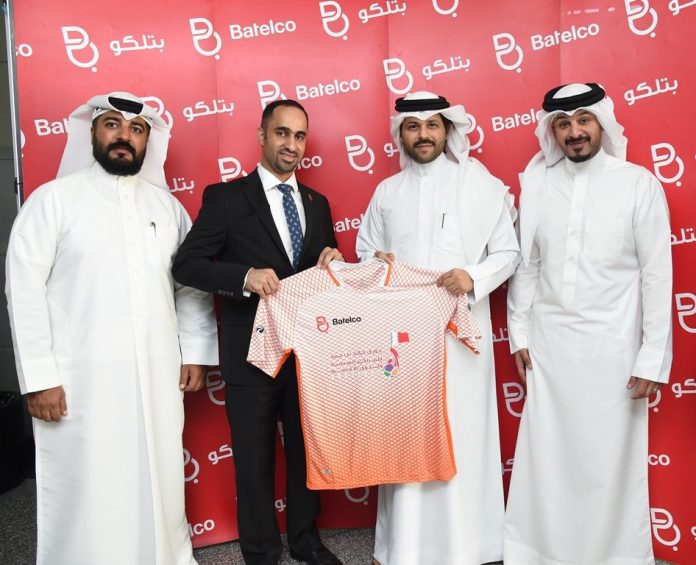 Batelco, in line with its commitment to the youth of Bahrain, has announced its support of the 5th Khalid Bin Hamad Youth Centres Futsal League and the 2nd Khalid bin Hamad People with Disabilities Futsal League, which will take place from July 24th to August 23rd at Khalifa Sports City, under the slogan of ‘Meeting of Generations’.

Batelco will be the exclusive telecom partner for the event, which is taking place under the patronage of His Highness Shaikh Khalid bin Hamad Al Khalifa, First Deputy Chairman of the Supreme Council for Youth and Sports and President of Bahrain Athletic Association. The event is organised by the Ministry of Youth and Sports Affairs (GOYS) under the guidance of His Excellency Mr. Hisham bin Mohammed Al Jowder, Minister of Youth Affairs and Sports.

In the Youth Centres League, the participating Centres will be divided into eight groups who will play in knock-out rounds with the top two teams in each group qualifying for the Round of 16. Disabled competitors will be given a greater chance in the Disabled Futsal League this year with eight teams being divided into two groups to play in the quarter-finals, then semi-finals and finals with losing teams competing in matches for third and fourth place. An addition to the fun this year is a special tournament for girls with six teams representing a number of Bahrain’s Youth Centres.

The Khalid bin Hamad Youth Centres Futsal Leagues aim to deepen the bonds among Bahraini youths. The Leagues, which encourage the role of youth centres that are recognised as the incubators of the youth in the Kingdom, play a great role in supporting youth activities with a major emphasis on sports.

Batelco Bahrain CEO Eng. Muna Al Hashemi said that Batelco was very pleased to support the annual Futsal leagues as the events brings youths from all over the Kingdom together and encourages friendly competition which is fun for the participants and spectators.

“We praise such initiatives which are in line with Batelco’s commitment to the youth of Bahrain. Developing bonds between young people to build cooperation through their interest in sports is very worthwhile,” said Mrs. Al Hashemi.

Batelco Senior Manager Corporate Affairs Osama Al Saad added that the football tournament promises to be very rewarding and entertaining for everyone involved. “Besides building bridges of brotherhood across the Kingdom, the participants are provided with the opportunity to hone their football skills,” he added.

Bahrain International Circuit (BIC) continues its busy start for 2021 as it hosts the first Open Track Day of the new year on Saturday...
Read more
PR This Week

KBC Bank, a Belgium-based bank with operations across Europe, US and Asia Pacific, has chosen Finastra to help manage its transition through the upcoming...
Read more
PR This Week

Bahrain’s National Broadband Network (BNET), launched in October 2019 and responsible for providing broadband network services across the Kingdom of Bahrain, has opened its...
Read more

COVID-19 developments and precautionary measures aimed at mitigating the spread of the virus continue to be discussed at the periodical meetings held by the...
Sports This Week

Bahrain Raid Xtreme driver Nani Roma set out from Neom, towards Al-Ula for stage ten of the Dakar Rally 2021 in the #311 Hunter....
Wheels and Gears

McLaren Automotive will bring the full force of its expertise in hybrid powertrain engineering to the supercar class next year with the introduction of...
Sports This Week

On the directives and follow-up of HH Shaikh Nasser bin Hamad Al Khalifa, Representative of HM the King for Humanitarian Works and Youth Affairs,...
PR This Week

The Ministry of Health Bahrain has started to provide COVID-19 vaccinations at your home, the first of its kind in the region. The service...
Inside Bahrain

HRH the Crown Prince and Prime Minister receives the Ambassador of the Federal Republic of Germany and the Chargé d’Affaires of the United States...

His Royal Highness Prince Salman bin Hamad Al Khalifa, the Crown Prince and Prime Minister, today received the Ambassador of the Federal Republic of...
Inside Bahrain

Minister of Interior, General Shaikh Rashid bin Abdullah Al Khalifa, today received some new officers who took the oath in front of him. Chief of...
iGA

In line with the Kingdom’s national efforts to limit the spread of infectious diseases, medical check-ups will be mandatory for employees in industrial and...
Inside Bahrain