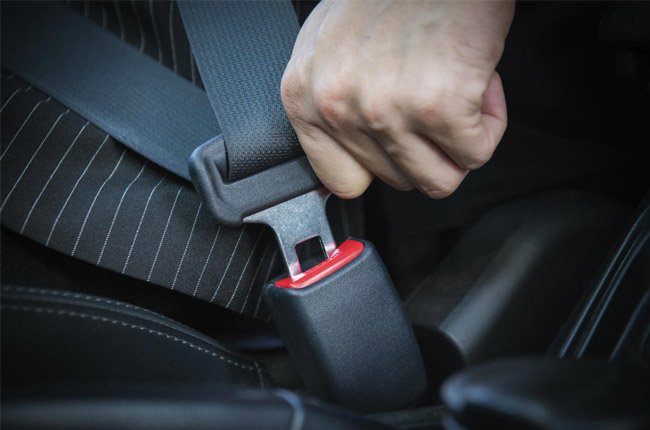 BUCKLE UP THE SEAT BELT WHILE DRIVING

The common wisdom in Bahrain seems to be that since the number of vehicles on the roads is rising fast, with some families having two or more cars in their garages, and consequently the highways and the byways are getting clogged speeding in the city and surrounding areas is on the decline per force. Since you have to slow down to 80kmph or even 60kmph and sometimes crawl at even lower speeds due to heavy traffic the necessity to put on the belt is diminished.

In reality that is not the case. While at peak hours or when schools and offices close [and around the time when they open] there might be a spurt in traffic for 30 to 45 minutes during certain hours of the day, speeding remains an issue. And as for the rising number of vehicles, the Works Ministry is known for keeping pace with the increasing traffic by widening the roads and creating additional lanes and new intersections.

The point is, if traffic slows down your vehicle for some time on a certain stretch that cannot be a reason to believe one could do without a seat belt. When you start the engine, make sure you already are wearing the belt.

That’s because not wearing the belt can have consequences which, even if not fatal in every case, could leave physical and mental scars and traumas in their wake.

The seat belt keeps one secure. It prevents a driver and his passenger in the front seat from hitting the windscreen. In case of a speeding car the impact is bound to be deathly. Also, studies have shown that those not wearing a seat belt are 30 times more likely to be ejected from a vehicle during a crash.

And if you think that the air bag in your steering wheel will save you the bother of having to wear the seat belt you are mistaken. Air bags are designed to work with safety belts, not replace them. If you don’t wear the seat belt, you could be thrown into an opening airbag and be injured or even get killed.

It is equally important for you to insist upon your co-passengers – especially the one in the front seat – to wear the belt. All the negative points about not wearing the belt apply to him/ her as well.

And if you have toddlers or children in the back seat, sit them in a child seat properly buckled up, with the seat comfortable and suitable to their size.

And finally, do not just make a pretense of wearing a belt to avoid a Traffic policeman’s ticket. It is your life. So take the precaution seriously.

All the developed countries today passed through different stages of development. Initially, the contribution of the agricultural sector dominates. For example, at the early...
Read more

INJAZ Bahrain has recently concluded the fifth edition of its annual program, “INJAZ Talk”. The virtual talks were held remotely through a series of...
Read more
PR This Week

In response to national COVID-19 mitigation efforts, Gulf Air, the national carrier of the Kingdom of Bahrain, has successfully imported 82 tons of medical...
Wheels and Gears

A charity initiative aimed at supporting Bahraini citizens and families and other needy people affected by COVID-19 has been unveiled. The Royal Humanitarian Foundation (RHF)...
Sports This Week

UCO Parents Care Centre was founded in 1994 as an initiative of UCO Marine Contracting Co. and with support of the Ministry of Health...
© GO ALIVE MEDIA
MORE STORIES