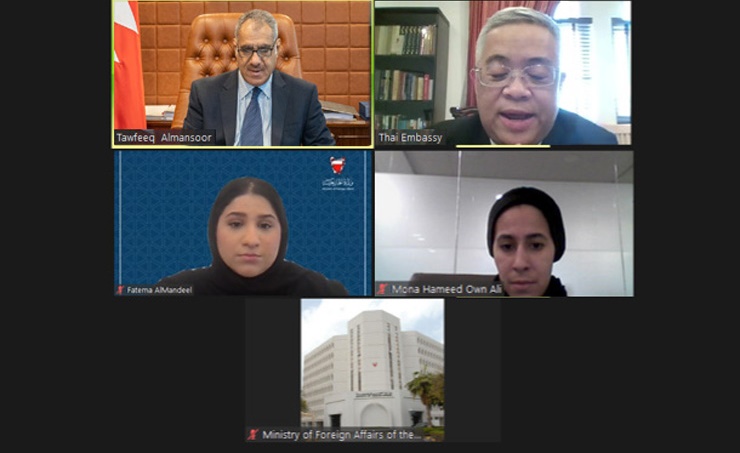 Undersecretary for Consular and Administrative Affairs at the Ministry of Foreign Affairs, Ambassador Tawfeeq Ahmed Al-Mansoor, held a virtual meeting today with the Ambassador of the Kingdom of Thailand to the Kingdom of Bahrain, Thanis Na Songkhla.

Ambassador Tawfeeq praised the close relations between the Kingdom of Bahrain and the friendly Kingdom of Thailand, and the distinguished level they have reached in all fields, stressing Bahrain’s constant keenness to develop various aspects of joint cooperation between the two countries in a way that serves their interests. He wished the Thai Ambassador continued success.

The Thai Ambassador commended the notable level of friendship and cooperation between the two countries and their constant growth and development, stressing his country’s keenness to consolidate these relations in a way that would benefit both countries. He wished the Kingdom of Bahrain continued progress and prosperity.

The two sides also discussed a number of issues of common concern.