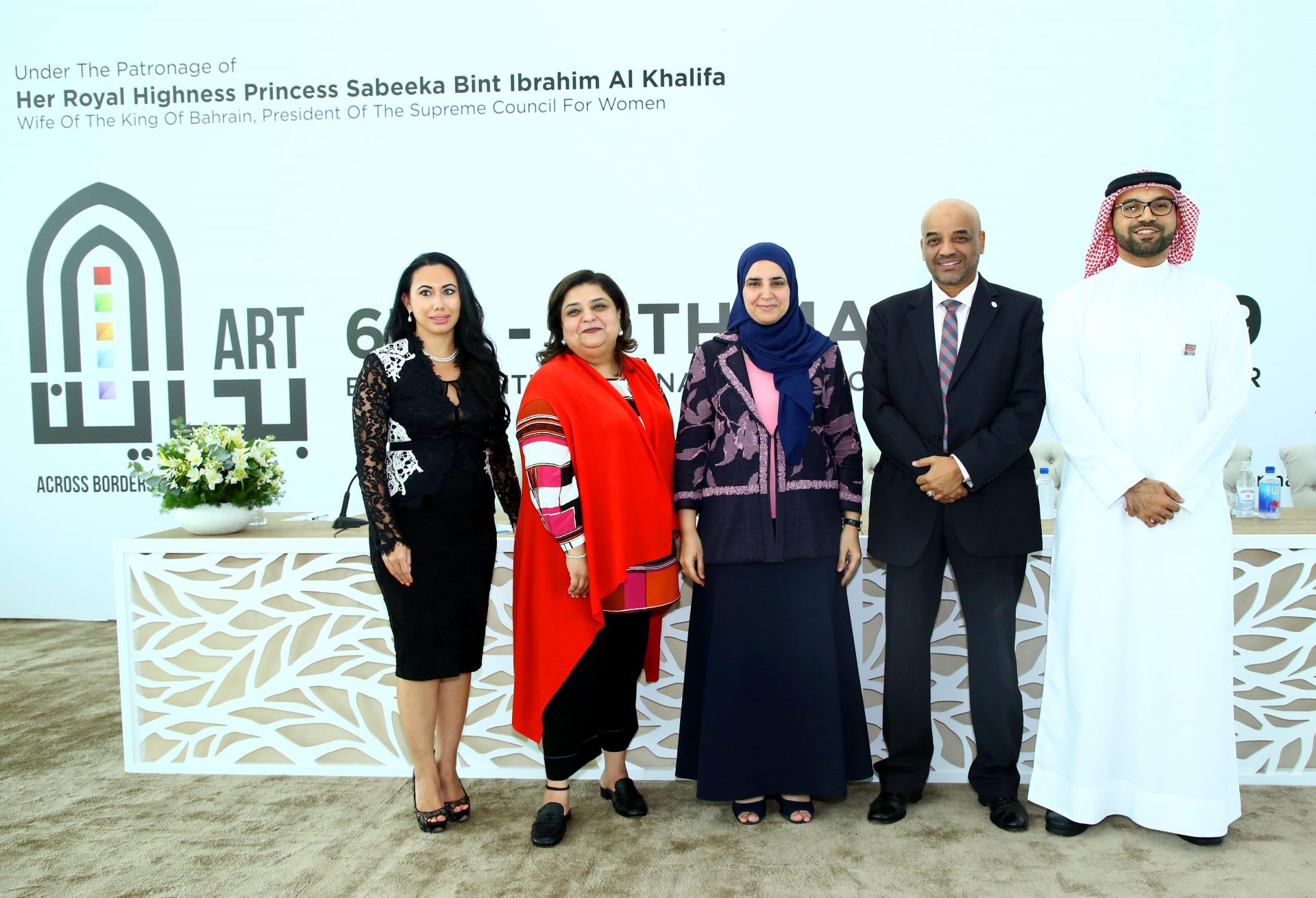 Under the patronage of Her Royal Highness Princess Sabeekha bint EIbrahim Al Khalifa, Wife of the King of Bahrain and a keen supporter of the Kingdom’s cultural heritage, ArtBAB 2019 (Art Bahrain Across Borders), the fourth edition of the Middle East’s youngest and most promising art fair will take place from March 6 to 10, 2019 at the Bahrain Exhibitions & Convention Centre.

In 2019, the theme of the exhibition will be ‘Legacies’ which will explore the nearly 50 year-old Bahraini contemporary art scene and its foundation in the Kingdom’s rich art heritage.

At the same time, the exhibition is pushing boundaries and will offer visitors a truly multi-layered and multi-dimensional experience through exposure to a Virtual Reality Corner that allows exploration of some of the world’s leading private museums and a diverse Speaker’s Programme that will bring together art foundations, cultural districts and museums with fintech, blockchain, AI and VR specialists.

“We are proud of the unique conversations that we have started about Bahraini art around the world – in 2018 alone, our supporting project Artists Across Borders has taken 25 Bahraini artists to Paris, Moscow, Singapore and the U.K.,” said Shaikha Maram bint Isa Al Khalifa, Director of the Office of Her Royal Highness Wife of the King of Bahrain, “In the 2019 edition of the Fair, we shall explore not just the heritage and legacies that inspire Bahraini contemporary art but also the new directions of art on the global stage. We shall also have a beautifully curated Artisanal Room featuring special installations and large masterpieces rooted in the traditional skills of Bahraini crafts heritage.”

Kaneka Subberwal, Fairs and Programme Director of ArtBAB 2019, said: “The art fair’s 2019 edition would be an exciting amalgam of Bahraini art and cutting-edge trends discussed during the conference. This year, in a first for the region, ArtBAB will take visitors beyond the canvases of the gifted artists of Bahrain and the gallerists who bring some of the famous contemporary artworks to showcase at the fair and take them not just across borders but across time-frames too.”

Rachel Rekkab, Founder of UNFOLD Art XChange and Owner of Artem Holdings adds, “We are honored to be partnering with ArtBAB and to have ArtBAB as our Host Sponsor for our second edition. This will be launched as part of ArtBAB’s talks program from the 7-9 March 2019 where we will be bringing together over 40 cultural, fintech, blockchain, AI and VR specialists from 20 countries across the globe to Bahrain. We would like to thank Kaneka Subberwal for her generous support and look forward to developing a long-term relationship with ArtBAB.”

About art, culture and technology

In its effort to decode the intersection between art, culture and technology, ArtBAB 2019 will host an impressive array of speakers through a series of panel discussions, debates and interviews.

The Bahrain art fair will also be launching a world premier on Art & Islamic Finance during the conference, as a debate between Deloitte Art & Finance and Deloitte ME Islamic Finance and Knowledge Centre (IFKC). The use of big data and analytics in helping collectors better manage liquidity, risk and volatility will also be explored with valuable insights from Christie’s and ArtTactic alongside live demos from CollectorIQ, MutualArt and Pi-eX.

Jason Bailey, Founder of Artnome, the world’s largest analytical database will chair one of the art world’s biggest debates on AI and Artistic Creation, exploring the role of AI and machine learning in replacing humans. Robbie Barrat, a 19-year old who developed the code for the first AI Generated Portrait of Edmond de Belamy by the Paris collective, Obvious that was auctioned at Christie’s will take center stage with Mario Klingemann, a pioneer in the use of computer learning in the arts and a Google Arts and Culture resident, and Nature Morte Gallery. KlarisLaw will explore copyright issues on AI-Generated Art.

VRFocus, a virtual reality specialist website will close the conference with an exclusive interview with VIVE Arts and moderate a panel discussion on VR as a Game Changer for the Arts with dslcollection, The Kremer Collection, Khora Contemporary, Vastari and The National Gallery London.

“We are excited about the return of our showcase of Bahraini artists, BAB, which has attracted over 100 artists this year,” said Kaneka, “Our Selectors’ Panel consisting of Amal Khalaf– Projects Curator, Serpentine Galleries, London, Nathalie Anglès– Co-founder and Executive Director of Residency Unlimited, New York, Rebecca Anne Proctor– Editor-in-Chief, Harper’s Bazaar Art Arabia and Snejana Krasteva– Curator, Garage Museum, Moscow shall be finalizing the artworks that we shall display in the central space at the venue, putting the focus firmly on our Bahraini artists.”

Another major impactful move from ArtBAB 2019 will be the redefining of Bahrain’s rich crafts heritage through a contemporary design input. Visitors can view large modern installations of Bahraini crafts seen from a fresh perspective and explore chic, contemporary modernized Bahraini crafts that will take to the world a new portrait of Bahrain as a country which is open to contemporary thought and where the timeless old traditions adapt to new thought without losing their essence.

“We have taken the talent and the historical memory of craftsmanship that sustains Bahrain’s crafts, passed it through the prism of contemporary sensibility and created a chic, art-based version of Bahraini craft pieces that will have global appeal. We have applied the same skills and rules but to create very different things.” Kaneka said, “We believe that our ‘Artisans Across Borders’ initiative will open new creative channels and is an important step in nurturing a sustainable economy for the creative energy of the Kingdom, making the arts and crafts relevant in the new millennium.”

Strategic Partner of the event is Tamkeen, Bahrain’s change management agency which supports the building of human resources and the Kingdom’s industrial and knowledge growth management.