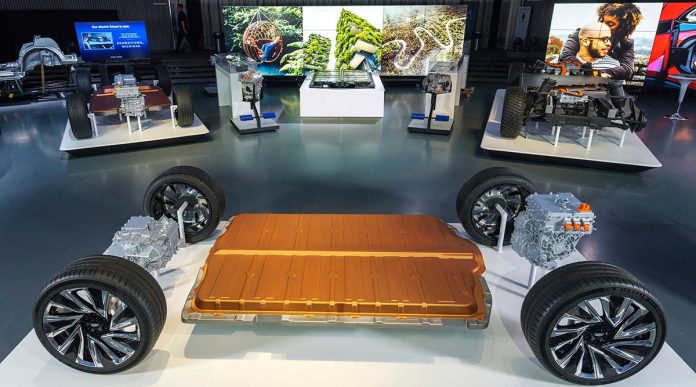 General Motors (GM) laid out its electric vehicle strategy. Showcasing roughly a dozen products as part of a broader attempt to convey to investors how serious it is about embracing its electric future.

GM revealed an all-new modular electric vehicle platform with an improved battery pack called Ultium. The GM electric platform intends to be flexible and multifaceted. The goal is to eventually undergirding a variety of vehicle types and shapes.

The new batteries are unique because of the “large-format, pouch-style cells”. Comparing to cylindrical cells, these can be stacked vertically or horizontally inside the battery pack. These batteries will offer power ranging from 50 to 200 kWh. It allows for a driving range up to “400 miles or more”. Motors designed in-house will support front-wheel drive, rear-wheel drive, all-wheel drive, and performance all-wheel drive applications.

GM altered the chemistry of its battery cells, in a move that’s distinct from most EV batteries in production today. The majority of batteries are made with NCM — nickel, cobalt, and magnesium. The Ultium batteries will add aluminum — so NCMA — and reduce the cobalt content by 70 percent. GM has also reduced by about 80 percent the amount of wiring from the EV architecture. Currently used in its Chevy Bolt vehicles. The hope is that this will drive battery cell costs below the $100/kWh level. Allow GM to get more bang for its buck as it scales up its EV production capabilities.

Ultium-powered EVs are designed for Level 2 and DC fast charging, GM says. Most will have 400-volt battery packs and up to 200kW fast-charging capability while the company’s truck platform will have 800-volt battery packs and 350 kW fast-charging capability. GM says it wants to address the two main pain points of EV ownership: cost and charging time.

The automaker has said it plans to release 20 electric nameplates by 2023 and will publicly unveil three of those vehicles in the months to come: the Cadillac “Lyriq” EV crossover in April and two electric versions of GMC’s Hummer in May. Following “soon after” is the Cruise Origin, an electric, self-driving vehicle. Development shared by by Cruise (a majority owned subsidiary of GM) and Honda.

All four GM brands – Chevy, Cadillac, GMC, and Buick – will be launching new EVs. The Cadillac Lyriq will be the first vehicle built on the company’s new BEV3 architecture. Next will be the Hummer EV in both pickup and SUV formats. Also to come are freshing Chevy Bolt EV and EUV with a longer wheelbase, a compact Chevy crossover, two Buick SUVs, and a Cadillac sedan called “Celistiq”. All of this is part of GM’s broader plan to spend $20 billion in capital and engineering costs by 2025.