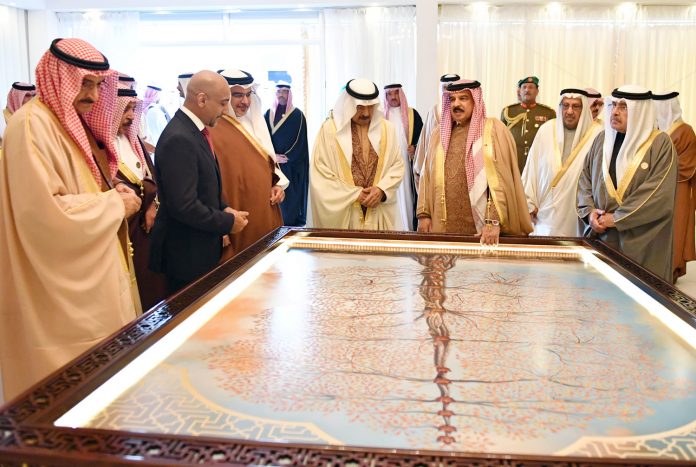 ‘Golden Charter’ Marks the Bright Image of the Brilliant Kingdom 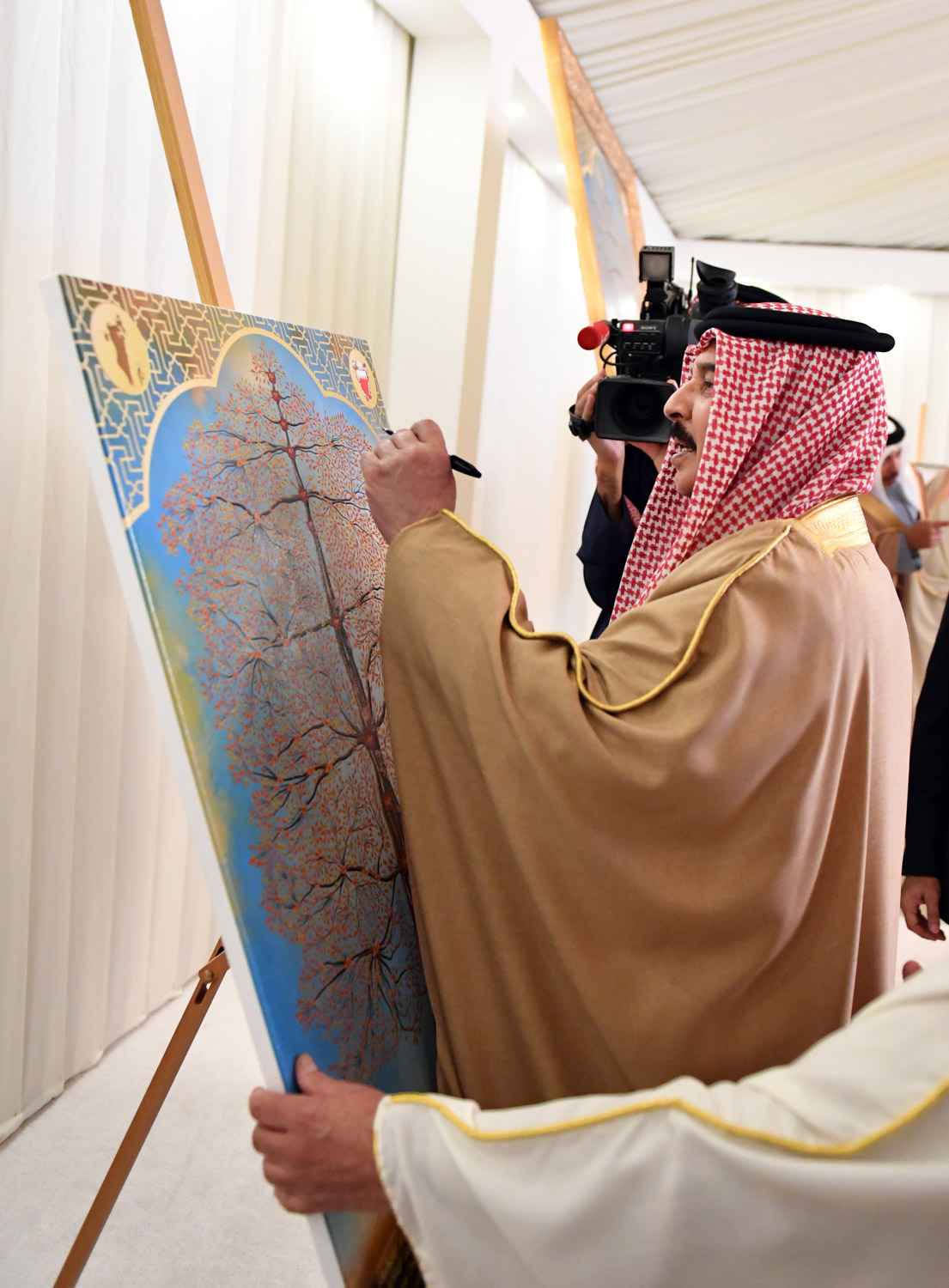 A short film was then shown, highlighting Bahrain’s landmark achievements ever since the National Action Charter was endorsed eighteen years ago. Addressing the ceremony, HM the King hailed the anniversary milestone which commemorates the historic consensus on the charter which embodied loyal people’s strong and free will to shape the future of their country and usher a new era of national development. 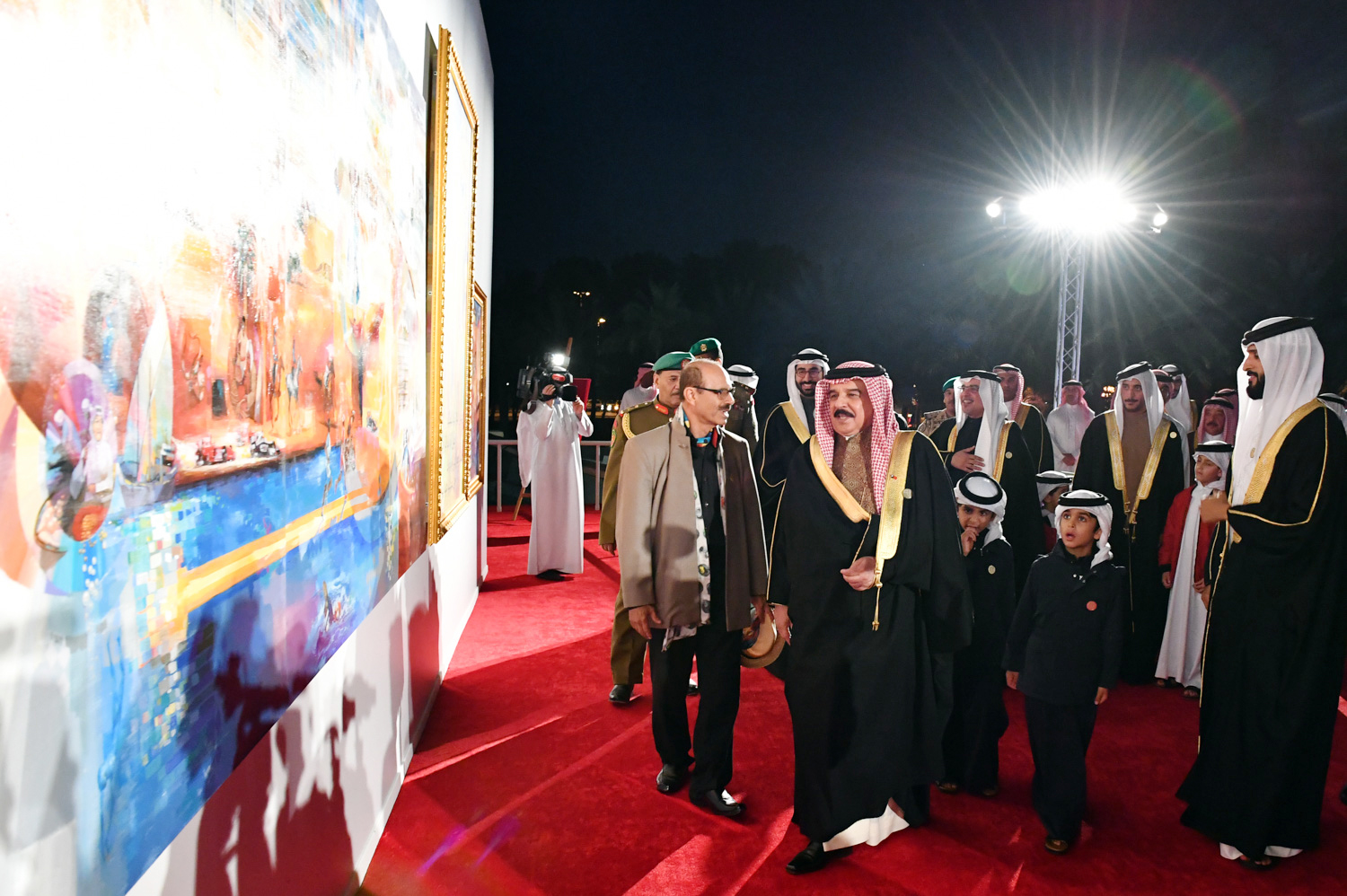 He paid tribute to Bahrainis for their strong determination, resilience and ability to brave challenges and turn difficulties into bright achievements for the nation in all fields of national work. He thanked HH Shaikh Nasser bin Hamad Al-Khalifa, hailing his dedicate role and efforts to promote sports in Bahrain and develop the youth sector.

His Majesty King Hamad bin Isa Al-Khalifa saluted the loyal people of Bahrain, recalling their patriotic and historic stance which reflected their will and consensus on the fundamentals of the national action charter that ushered in a new era of landmark development.

“The National Action Charter represented an important start and a bright moment in the historical annals of modern Bahrain, heralding an era of freedom and human rights”, he said. 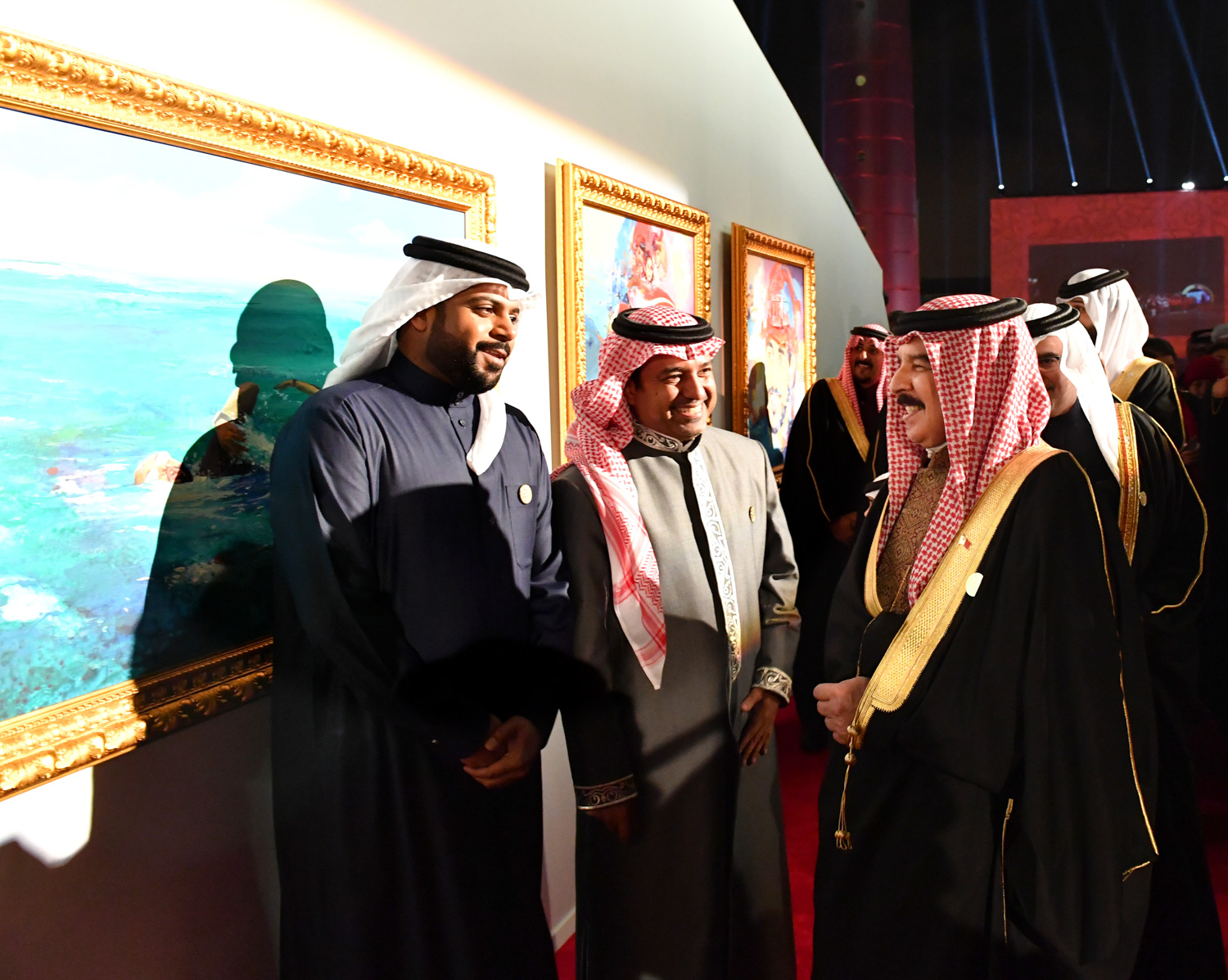 Addressing the ceremony at Al-Sakhir Palace, HM the King stressed the crucial importance of the milestone which bolstered Bahrain’s pioneering model of human co-existence, embracing intellectual and cultural plurality. The NAC fundamentals, he said, will always serve as a major incentive for more development and progress for the sake of Bahrain, loyal people and the future of the coming generations.

HM the King welcomed all well-wishers and exchanged with them congratulations on this national milestone, thanking them for their lofty patriotic feelings and good wishes. He took pride in Bahrainis’ dedication in serving the nation in all fields of national work, hailing their role in bolstering the Kingdom’s standing on all levels.

“Bahrain citizens will always remain the cornerstone of national development and its ultimate aim”, said HM the King.

The well-wishers congratulated HM the King on the national milestone, taking pride in Bahrain’s political, economic, cultural, social and educational strides in the royal prosperous era, which ranked Bahrain an advanced standing among states. 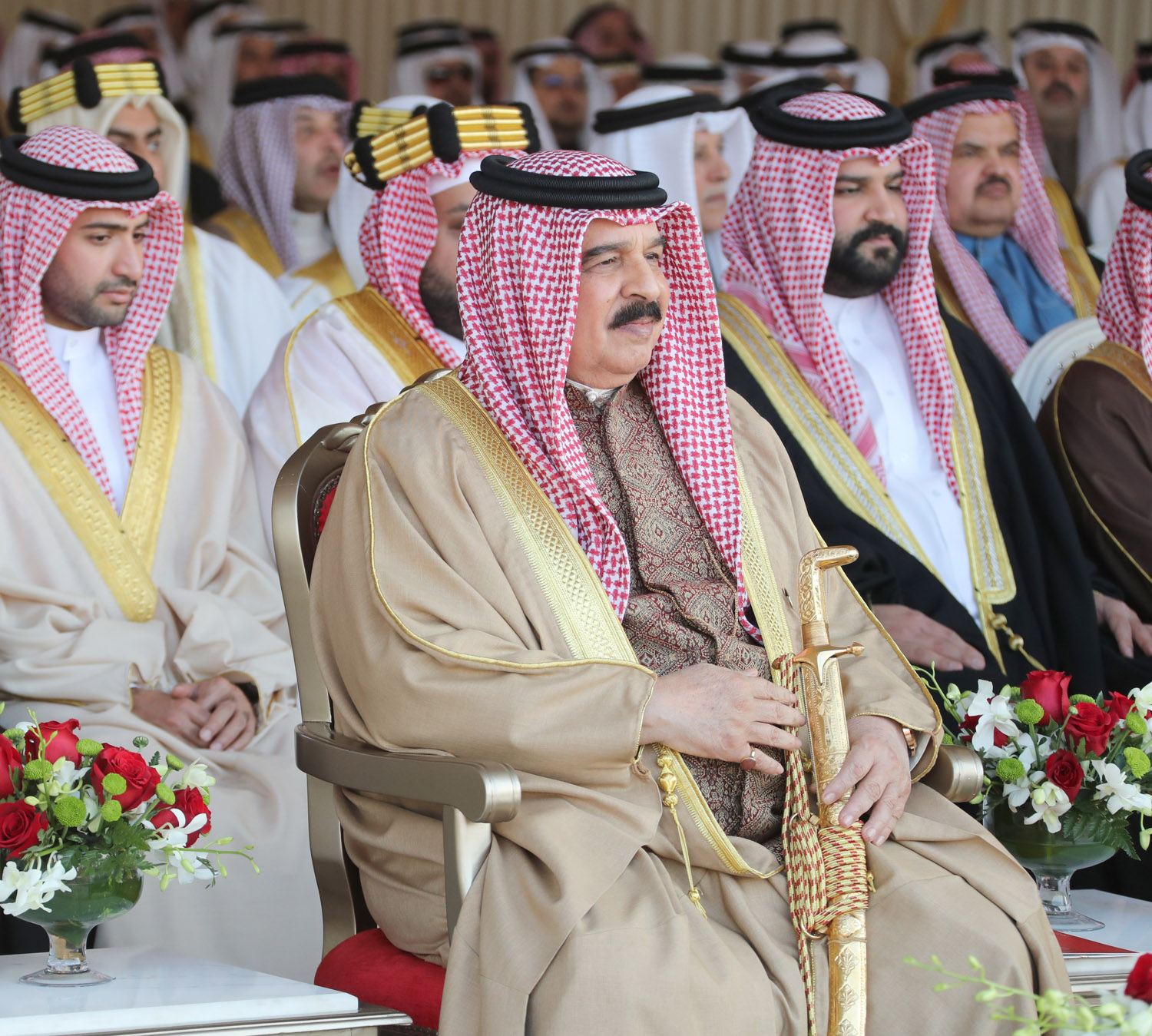 HH Shaikh Nasser bin Hamad Al-Khalifa delivered a speech, thanking HM the King for gracing the ceremony which celebrates the 18th anniversary of the National Action Charter. He saluted the loyal citizens of Bahrain who rallied to endorse the national milestone by a sweeping majority in 2001, which symbolizes their unity, patriotic awareness and allegiance to HM the King, the architect of the Kingdom’s development, progress and prosperity.

He underlined Bahrainis’ landmark achievements which marked 2018 –
the year of achievements under the theme “Only Gold”, symbolizing the march of impressive and impressive strides that bolstered the Kingdom’s standing among nations.

Al-Moayyad pointed out that the landmark achievements attained by Bahrain during the “Year of Gold” provide a bright image of the response of Bahrainis to calls to raise the nation’s banners higher in various fields, paying tribute to HM the King’s Representative for Charity Work and Youth Affairs, Supreme Council for Youth and Sports Council, SCYS, Chairman and Bahrain Olympic Committee President, His Highness Shaikh Nasser bin Hamad Al Khalifa, for his unwavering interest and personal follow-up on efforts to ensure a perfect environment for Bahraini athletes to reach podiums, and his personal keenness to contribute to bringing glory to Bahrain through winning the world Ironman Championship.

Chief Executive Officer of Bahrain’s National Communication Centre (NCC), Ahmed Mohammed Al-Mannai, said that on February 14, Bahrain had marked the 18th anniversary of its National Action Charter (NAC), “the document that laid the foundations of the nation as a representative democracy and constitutional monarchy”, describing NAC as reference document that consolidates the comprehensive development process spearheaded by His Majesty King Hamad.

” A total of 236 Bahraini citizens attained 251 achievements in all fields in 2018″, said HH Shaikh Nasser bin Hamad Al-Khalifa, paying tribute to HM the King for his royal support which was a catalyst to brave challenges and overcome difficulties to honour Bahrain at international competitions and arenas. 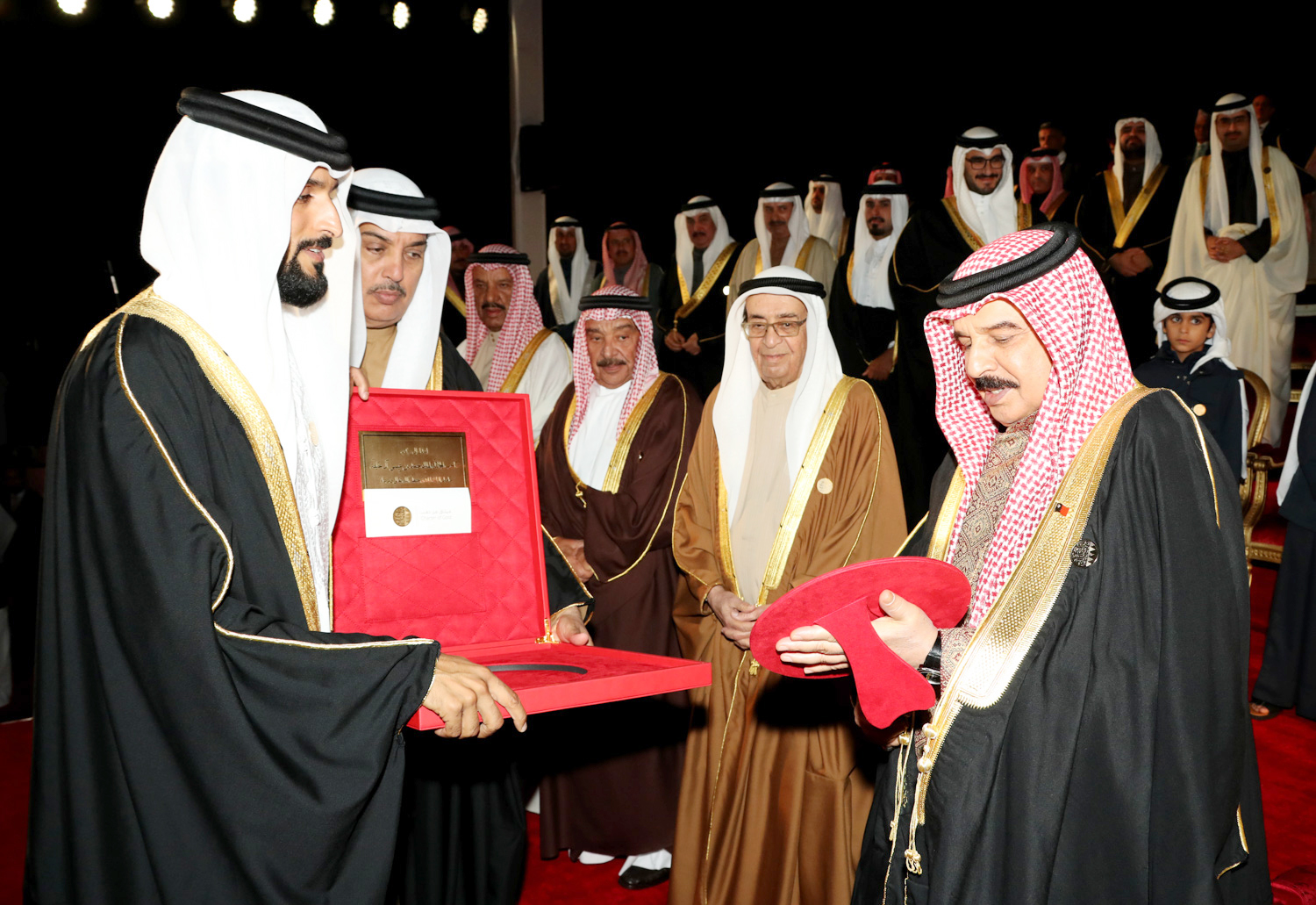 Addressing the ceremony, HH Shaikh Nasser bin Hamad Al-Khalifa said that Bahraini achievers are honoured to stand before HM the King at the National Charter Monument, which bears the names of all citizens who rallied to endorse the milestone by a sweeping majority.

He pledged to spare no efforts to excel and aspire to achieve top ranks, inspired by HM the King’s pioneering project which serves as catalyst to attain further national strides that honour Bahrain and its people. He paid tribute to Bahrainis, the people of achievers, which dedicated themselves to serving the homeland and spared no efforts to honour Bahrain and bolster its standing among nations. HH Shaikh Nasser bin Hamad Al-Khalifa then requested HM the King to sign the Book of Achievers, which keeps record the names of Bahrainis who honored the Kingdom of Bahrain.