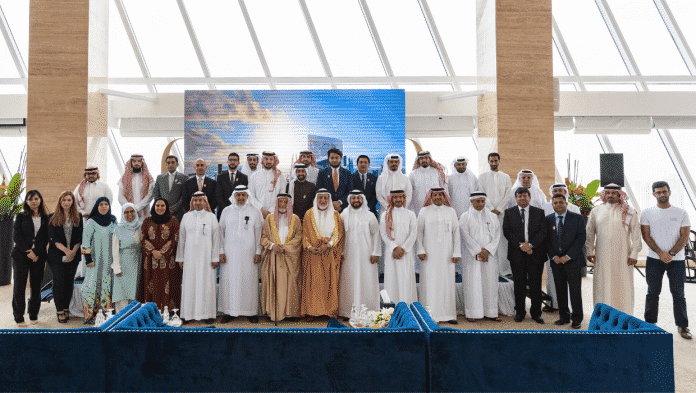 Golden Gate, one of Bahrain’s leading real estate developers, constructing the tallest residential tower in Bahrain, recently held a luncheon to celebrate its 1st anniversary. The event was attended by Chairman, Mr. Ishaq Al Kooheji, Executive Director, Mr. Anas Al Kooheji, senior officials and employees from the Golden Gate family in addition to VIP’s, Guests, and members of the press.

“On behalf of the Golden Gate family, we are honored to be here today, on this wonderful occasion to celebrate our first anniversary,” commented Mr. Ishaq Al-Kooheji on this auspicious occasion.

Commenting on the growth and tremendous achievements of Golden Gate, Mr. Al Kooheji thanked the owners for their continued support and confidence in this Landmark. In addition, he said: “One of the milestones of this achievement is the presence of three specialized developers with more than 100 years of experience working together to achieve the highest possible results. It is a partnership between Kooheji Golden Gate, Ajmera Realty and Mayfair Housing of India, where the partnership is built on solid foundations, and cooperation and support between them can best be described as an evolution from a commercial link to a family bond.”

Ms. Eman Al Mannai, Vice President of Sales and Marketing, delivered her speech on this occasion, thanking the audience and expressing her joy at the increase in the number of owners and the growth of the Golden family day by day in achieving nearly eighty percent of sales, it is an achievement that was accomplished in record time. Bahraini trainees were also honored for the opportunity to participate in our latest real estate exhibition. “The aim is to engage Bahraini youth and train them for their development just as future architects and engineers were recently invited to access Golden Gate and learn from the latest technologies and building methods used – an initiative that has never been done by a Bahraini developer” continued Ms. Al Mannai.

Mr. Ashok, General Manager of Projects, spoke about the construction of the project with a constant focus on the highest standards of safety and perfection with special thanks to Golden Gate partners; Aref Sadeq Design Consultants, Al Jameel Construction Company, Bahrain Bay and the valuable support received from the Government of Bahrain; the EDB and RERA as we all share the success for the future of the Kingdom.

During the celebration, the owners expressed their gratitude to the Golden Team for their dedication, commitment and creativity, and because they regard this company as their extended family, adding that success is our success and every step forward is a step we take together.

HH Shaikh Nasser bin Hamad Al Khalifa, Representative of His Majesty the King for Humanitarian Work and Youth Affairs has published a video on his...
© GO ALIVE MEDIA
MORE STORIES