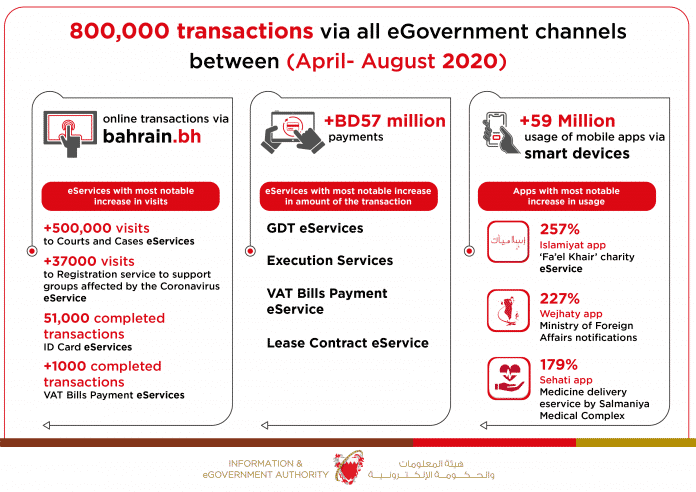 AlKhajah said that digital transformation projects across government entities are among the iGA’s highest priorities. Their implementation is being overseen by the Supreme Committee for Information and Communication Technology, chaired by Deputy Prime Minister, HH Shaikh Mohammed Bin Mubarak Al Khalifa, with the support of the Minister of Interior, HE Gen. Shaikh Rashid bin Abdulla Al Khalifa. AlKhajah added that the iGA deploys all available resources towards achieving digital transformation goals and equipping government organizations with technologies that help better serve the public. He praised the commitment shown by ministries and government entities, which contributed greatly to the stellar results.

Commenting on application user growth, AlKhajah highlighted a spike in BeAware Bahrain app downloads and registrations, which topped 1 million downloads since its launch end of March. He praised the public’s awareness of their role in maintaining public health and helping to limit the spread of the coronavirus. The public’s general experience with technology also played a role in the success of the applications, which allow transactions to be completed easily and conveniently, without the need to visit service centers. A host of new services were recently added, contributing to the increased usage.

Commenting on digital transformation projects the iGA is developing or planning to launch soon, AlKhajah said a suite of new eServices for ministerial departments are currently being designed in line with the directives of HH the Minister of Interior. The new services that iGA currently worked on, come as part of the comprehensive batch of 76 Ministry of Interior eServices, including nationality and passports affairs services (application submissions, visa transfers, and visa application cancellations); ID card residential address updates; traffic services such as vehicle ownership document re-issuances (including replacement of lost/damaged certificates) and vehicle number ownerships; Civil Defense services such protection and fire prevention certifications for buildings and fire and safety equipment non-objection certificate requests; and Coast Guard ship registration certificate renewals.

The report revealed that services offered through the mobile apps were used nearly 60 million times, including more than 134,000 financial transactions valued at more than BD6 million. The app which saw the highest usage increase was ‘Islamiyat’, which enjoyed a 257% spike due to the Zakat Service and the addition of the ‘Fa’el Khair’ charity service which processed payments for the services exceeding BD100,000, with not a single case requiring financial assistance now remaining. The ‘Wejhaty’ app, which provides Ministry of Foreign Affairs notifications to Bahrainis abroad, recorded a 227% growth over the pandemic period. Meanwhile the ‘Sehati’ app recorded a 179% jump in usage due to the addition of a medicine delivery service by Salmaniya Medical Complex.

A total of 31 eServices were developed and launched From February, in addition to alternative eServices offered specifically during the pandemic, bringing the total across digital channels to 477 new and revamped services.

Statistics extracted from the National Portal, bahrain.bh showed strong demand for the ‘Corona Affected Registration service’ which was launched last May in cooperation with the Royal Humanitarian Foundation (RHF). The service received 37,000 visits within just three months. The ‘VAT Bill Payment service’, launched in cooperation with the National Bureau for Revenue (NBR) last June, processed more than 1,400 financial transactions. Demand also increased for services offered by the Ministry of Justice, Islamic Affairs and Endowments and the Ministry of Education. ID card services saw a spike thanks to the recent launch of a comprehensive suite of ID card and population registry eServices. 51,000 ID transactions. ‘Lease Contract services’ recorded a 666% surge in payments, and a 330% jump in ‘Payment of Court Execution Ruling’ during the same period.